The Padang to be Gazetted as Singapore’s 75th National Monument

The Padang will be officially gazetted as Singapore’s 75th National Monument on 9 August 2022, making it the first green, open space to join the country’s list of National Monuments. The iconic site is a social and community space that has borne witness to many significant national events, and today, continues to serve as a venue for recreation and sporting events. In view of its strong national, historical and social significance, the Padang will be preserved and accorded the highest level of protection in Singapore under the Preservation of Monuments Act. With the gazette, the character and appearance of the Padang will be preserved for future generations, while ensuring all current uses can continue. 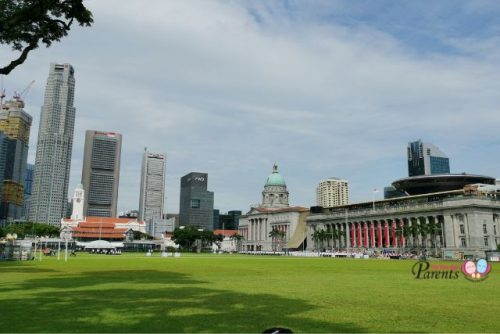 The Padang is a key landmark in the Civic District, and stands out amidst the colonial buildings around it and Singapore’s commercial core to its south-west.

The gazette was officiated by Mr Edwin Tong, Minister for Culture, Community and Youth, who was present to preview some of the commemorative initiatives which will be launched in conjunction with the gazette. Minister Tong said, “The Padang will be the first green, open space to join our list of National Monuments. Together with our 74 other National Monuments, it preserves and celebrates the stories that define Singapore and our people. Generations of people have gathered here and witnessed key milestones in Singapore’s history. It stands as a testament to Singapore’s historical journey, anchoring our Singaporean identity and reflecting our place in the world. The gazette of the Padang as a National Monument will protect it, as it is now, from alteration and change which would affect its character and significance, while allowing it to continue to be a social and community space enjoyed by Singaporeans.”

The Padang and its significance

The Padang stands out amidst the other edifices surrounding it in the Civic District as well as the larger commercial core of the city centre in its south-west. It has been retained as an open green space despite the many development changes in its vicinity since Singapore’s colonial days. It is also bordered by several National Monuments all around its perimeter – the Cenotaph, Lim Bo Seng Memorial, Tan Kim Seng Fountain along one of its longer sides, the Former City Hall, Former Supreme Court and Saint Andrew’s Cathedral on the other, as well as the Civilian War Memorial and Victoria Theatre and Concert Hall at either end of its shorter sides.

The historic site is associated with key milestones in Singapore’s history, including the victory parade celebrating the formal surrender of the Japanese in Singapore on 12 September 1945; the victory rally of the first fully elected Legislative Assembly on 3 June 1959; the installation of Mr Yusof Ishak as the first Malayan-born Yang di-Pertuan Negara (head of state) and the unveiling of National Symbols on 3 December 1959; as well as the inaugural National Day Parade on 9 August 1966.

The Padang is also one of Singapore’s oldest spaces for public recreation and celebrations, and hosted sporting events during the colonial period such as New Year’s day sports and cricket matches. Celebrations for royal birthdays, jubilees, coronations, Lunar New Year, Thaipusam and the Prophet Muhammad’s Birthday have also been held there. Today, the Padang continues to function as a key recreation and commemorative space for members of all communities, hosting major sporting events such as the Singapore Cricket Club International Rugby Sevens and serving as the starting and end-point of the Singapore Marathon.

The Singapore Cricket Club (SCC) and Singapore Recreation Club (SRC) sit on either ends of the Padang, and are key community stakeholders involved in the maintenance and use of the site. Mr Zoher Motiwalla, President of the SCC, said, “The gazette has been long overdue in recognising the Padang’s position as the site of many significant national events, and its importance as one of the roots of our country’s history and heritage. The SCC has been privileged to have been a part of the Padang since we were established in 1852, and to have been able to witness Singapore’s growth and development around the field into a sovereign nation and our home. We take very seriously our role as one of the stalwart custodians of this newest National Monument, the Padang, and will continue to help maintain it as a place that brings communities together to interact and play through sports and leisure activities.”

Mr Chang Yeh Hong, President of the SRC, added, “The SRC Management Committee and its Members are delighted that the Padang is gazetted as the 75th National Monument. Located at the eastern end of the Padang, the SRC has been the co-custodian of this historically and culturally rich heritage ground for the past 139 years. Besides maintaining this historical site, the Club has continued its tradition of promoting sports for all – every week the Padang is abuzz with sporting activities, from soccer to softball, while local and international soccer and softball tournaments, as well as youth soccer clinics, have also been organised, to name a few. This is a tradition we will proudly uphold.”

Following the gazette, the National Heritage Board (NHB) will promote greater awareness and appreciation of the Padang’s significance in Singapore’s history through various commemorative initiatives to be launched from August, including tours and interactive games for students and members of the public. These initiatives include Maze@Padang, a Minecraft game for upper primary school students where players will be transported to a virtual underground maze beneath the Padang. While competing against their peers to hunt for clues and answer questions to escape the maze in the fastest possible time, students can learn about the significance of the space and the important milestones in Singapore’s road to independence in a fun and interactive manner.

In addition, new guided tours focusing on the Padang and two of its surrounding National Monuments – Former City Hall and Former Supreme Court – will be launched in the month of August. Members of the public can also look forward to Monumental Hunt in the Civic District launching in November this year, a fun-filled puzzle hunt in the Civic District to discover fascinating new facts about our National Monuments.

Ms Jean Wee, Director of the Preservation of Sites and Monuments division, NHB, said, “The successful gazette of the Padang reflects our ongoing efforts to enhance the preservation and promotion of places and spaces of national significance to Singapore. The Padang, one of the oldest open spaces in Singapore, is an iconic social and community space that has borne witness to many significant national events, and now continues to serve as a venue for recreation and sporting events. Together with our 74 other National Monuments, it will contribute to the architectural and cultural diversity of our nation’s built heritage, and be celebrated as one of the many places that define Singapore and our people.”

The Padang is one of the oldest open spaces in Singapore for public recreation, and has been a commemorative space for people to gather and participate in witnessing the key milestones of Singapore’s history.

Fronting the Former Supreme Court and Former City Hall buildings, the Padang is a key landmark in Singapore, with its open green space standing out amidst the built-up colonial buildings immediately ahead of it, and the larger commercial core of the city centre looming to its south-west.

Historic Interest of the Padang

Architectural Interest of the Padang