Have you ever wondered why Hougang is commonly pronounced as Au Kang, different from how it is spelt?

Au Kang actually means “at the back of the river” in both Teochew and Hokkien, and is a reference to Sungei Serangoon at the end of Upper Serangoon Road, around which many Teochew-speaking inhabitants settled. In fact, the first documented use of this dialect name was from way back in 1856. “Hougang” is its Mandarin version, introduced in 1980 for the new residential town which was being built at the time. While the old Teochew pronunciation has endured and the Teochew community continues to have a strong presence, much has changed. A strong, diverse mix of other communities and cultures has also developed and continues to accentuate the colourful character of one of Singapore’s oldest towns. 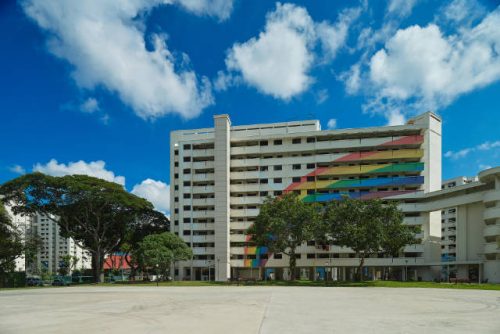 Block 316 with its iconic rainbow mural painted on its façade at Hougang Avenue 7, 2020. Courtesy of National Heritage Board

From tales of crocodile and pirate attacks to Singapore’s first fast-food restaurant in a housing estate, the new Hougang Heritage Trail, consisting of 18 heritage sites with 10 trail markers, uncovers a treasure trove of lesser-known stories of an area steeped in history, over three thematic trail routes: Landmarks of Hougang, Institutions of Service and Architectural Gems. Through historical landmarks, important community institutions, as well as personal memories and contributions from the community, the trail charts the journey of Hougang from a rural area with vast plantations and fruit orchards to a modern, thriving heartland estate.

NHB’s 20th heritage trail is part of its ongoing efforts to document and promote the distinct histories and social memories of different areas where Singaporeans live, work and play. It also features two National Monuments – the Church of the Nativity of the Blessed Virgin Mary and the Hougang Tou Mu Kung – making it the first heartland trail to do so.

A neighbourhood of diverse faiths and communities 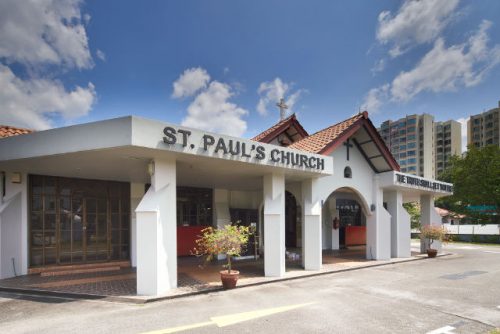 The St. Paul’s Church at the current site, 2018. Courtesy of National Heritage Board

Many of Hougang’s places of faith have origins dating back to the early kampung days. In the 1800s, the steady arrival of Catholic Teochew immigrants from China who came to Singapore eventually led to the establishment of religious institutions such as the Church of the Nativity of the Blessed Virgin Mary. St Paul’s Church was built in 1936 to serve Anglican Christians living in the Upper Serangoon area. Taoist and Buddhist temples were also established within the vicinity to serve devotees from different clans and dialect groups. Below summarises the places of worship found along the trail:

Church of the Nativity of the Blessed Virgin Mary

Located at the end of Au Kang when it was first built, the Church of the Nativity of the Blessed Virgin Mary is the oldest place of worship in the area. With a growing congregation in the late 1890s, the mission constructed the present-day Neo-Gothic building, complete with pointed arches and ribbed vaults. The church continues to provide religious services in Teochew today. In 2005, the church was gazetted as a National Monument. 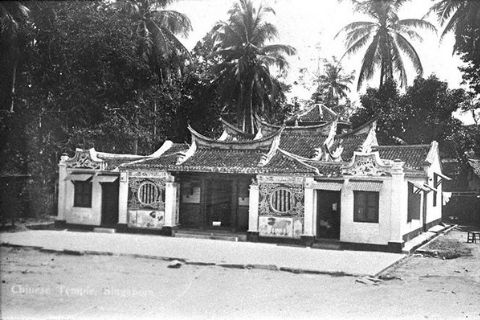 Hougang Tou Mu Kung began as a shrine in Lim Loh village in 1902 and is the oldest temple in Singapore dedicated to the Nine Emperor Gods. The Nine Emperor Gods were popularly worshipped in Malaya, especially among Chinese labourers working in tin mines, as they were believed to be efficacious in warding off epidemics and diseases. The temple was gazetted as a National Monument on 14 January 2005 and remains well known for its grand celebrations during the annual Nine Emperor Gods festival. 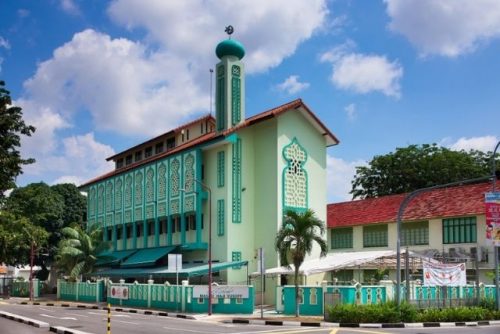 Masjid Haji Yusoff was built in 1921 on land donated by Gujarati merchant and philanthropist Ahmad Mohamed Salleh Angullia (1874-1939) and is the oldest mosque in Hougang. It became such a prominent landmark that the Chinese name for the section of the road near the mosque was Sembahyang Tng (a combination of the Malay word for “prayers” and the Hokkien word for “pavilion” respectively). The mosque now serves as a hub for the Malay-Muslim community living in the Hougang and Upper Serangoon areas.

In addition to its numerous sites of worship, Hougang is also home to a number of institutions established to serve the community. These institutions played important roles in providing medical care, education and social support, and advancing community bonding. Most were founded before the area was transformed into a modern housing town, and these include the Ramakrishna Mission along Bartley Road and various Chinese clan associations.

The Ramakrishna Mission in Singapore bought the land at Bartley Road in 1941 and built a boys’ home to house destitute boys affected by the war. It also built a temple on its grounds in 1954 for the devotees of Sri Ramakrishna. The blue and cream building is modelled after the mission’s main temple in West Bengal and integrates architectural features and motifs from different religions, such as Buddhism and Islam. This mix of cultural features reflects the mission’s belief that all religions lead to the same goal of enlightenment.

Established in 1929 at Upper Circular Road, which was known as a Teochew enclave, Phoh Kiu Siang T’ng started by providing funeral services for its members and dispensing medicine to the poor. In 1953, the shantang (siang t’ng) moved to Simon Lane due to the fact that Au Kang then had a large concentration of Teochews. Today, the shantang operates a free clinic.

The Serangoon Khiung Jai Co-Villagers Association is a clan association that represented and served the Hainanese enclave living in Lorong Ah Soo. It played an important role in nurturing Hainanese culture, establishing the Guang Yi troupe which was helmed by well-known Hainanese opera stars. The association continues to be active in fostering ties among the Hainanese in Singapore and set up a network in 1997 with seven other Hainanese associations in Singapore to coordinate their programmes.

Developing into a modern housing town

The first town centre at Hougang Street 21 was designed with elements of colonial architecture that referenced Singapore’s pre-war bungalows. These included low-rise buildings with rounded arches, multi-paned windows and louvres. The second town centre located at Hougang Central was distinguished by a pair of blocks with stepped pitched-roof buildings, which hark back to Hougang’s rural past.

Opened in 1947 along Upper Serangoon Road, Cheong Ann Watch Maker specialises in clocks and gramophones and is now run by the second and third generations of a Hokkien family. In the 1980s, as Cheong Ann saw more expatriate customers who were sourcing collectibles, the business evolved from providing mainly repair services to selling antiques and collectibles. The family also expanded its network from Singapore to Malaysia in its efforts to acquire vintage timepieces.

Mr Alvin Tan, Deputy Chief Executive (Policy & Community), National Heritage Board (NHB) said: “Through our new Hougang Heritage Trail and our other trails, we hope to encourage Singaporeans to explore their own backyards during this period of travel restrictions and rediscover local heritage delights. In doing so, we hope that Singaporeans will come away with a renewed appreciation of what Singapore has to offer in terms of unique heritage experiences with a strong local appeal.”

The Hougang Heritage Trail’s companion guide and map are available in four languages, and can be downloaded from NHB’s heritage portal here.

The Hougang Heritage Trail features three thematic trail routes of varying distances, which the public can embark on at their own time.

This route brings you to sites of heritage significance along Upper Serangoon Road and introduces sites that represent the diverse communities who live and work in Hougang. Stops include:

This route brings you to institutions established to serve communities by providing medical care, education and social support, and advancing community bonding, and explores how they meet the different needs of the community. Stops include: 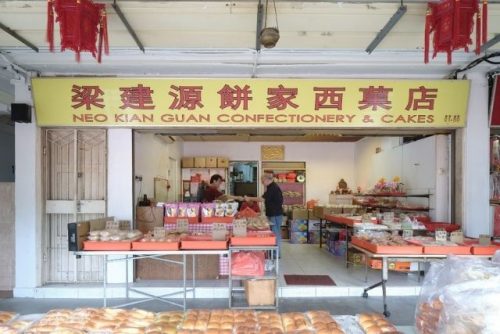 This route explores the built heritage of Hougang, including its pre-war shophouses, religious institutions and National Monuments. 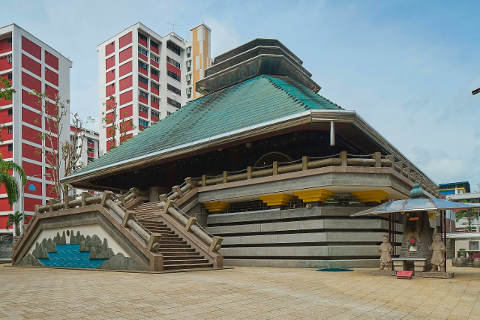 *These six remaining markers will be erected in collaboration with HDB progressively by early 2021.

1. Various institutions in Hougang helped in the war effort during the Japanese occupation. Institutions like Phoh Kiu Siang T’ng and the Church of Nativity of the Blessed Virgin Mary became places of refuge and where medical assistance could be sought.

3. Wolskel Road is closely connected to Lim Chee Gee, a pioneer businessman, and his son, war hero Lim Bo Seng. The Lim family owned much of the land around the area, and several of its businesses were located along Wolskel road near the family home. When Singapore fell to the Japanese in 1942, 200 Japanese soldiers surrounded the house in Upper Serangoon demanding for Lim Bo Seng, but he actually lived in a separate house with his family some distance away. 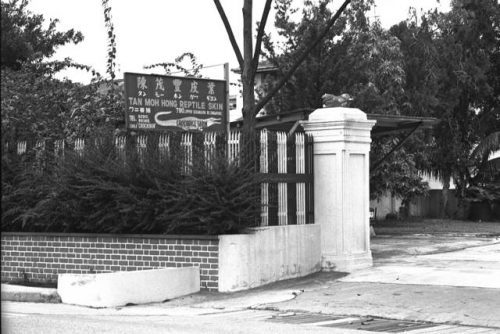 5. In the 1980s, HDB started to create a distinctive identity for different housing estates, and in Hougang, one of the ways they did this was to introduce curvatures to its buildings, with rounded balconies and curved columns. Some blocks were also decorated with murals, notably Block 316, which was painted with a sweeping rainbow mural. Over the years, the iconic block has been repainted a number of times, and while each iteration has resulted in a new design, it has always been adorned with a rainbow mural.

6. Hougang became the first housing estate in Singapore to have a fast-food restaurant when McDonald’s opened an outlet in its town centre in 1984. The outlet remains in its original location today.

7. Hougang Plaza, which was opened in 1993, was heralded as the first all-entertainment complex in a HDB estate. Up until its demolition in 2013, the plaza provided residents with recreational facilities that included a bowling alley, billiards hall and cineplex.