Raising Triplets: Three’s A Crowd, But I’m Lovin’ It!

For most new mums, adjusting to care for a defenceless and helpless little infant is no mean feat. Can you imagine that struggle… multiplied by three? 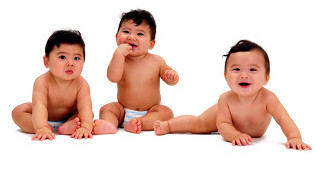 Which is why Anna, 42, is such a huge inspiration to all mothers out there! She and her husband welcomed not one, not two, but three brand new bundles of joy in March 2011. Parenthood has not been an easy ride, needless to say, but she is ever gung-ho and upbeat, and has bravely taken on each challenge as it comes.

And the Road to Parenthood Begins…

To begin with, the journey towards becoming parents was a difficult one for Anna and her husband, Tim. This was partly due to their busy lifestyle, and being separated by long distance for substantial amounts of time, as she lived and worked in Hong Kong while he pursued his business in Singapore. In fact, they would usually only get to meet once a month for a few days. Then there was also the issue of Anna’s body not producing enough polyps to get pregnant. After almost 14 years of marriage, and still no baby in sight, the couple were advised to give in-vitro fertilization (IVF) a try, and that’s how the triplets were conceived.

The treatment was done in the UK over the course of a month, and a pregnancy test turned out positive. Anna was doubtful about the results as she had experienced heavy bleeding just days before that. But one month later, when she saw her doctor in Hong Kong, the doctor confirmed the happy news. During the ultrasound scan, it double surprise as the doctor found a second foetus, and then later a third one! It certainly was a crowded womb!

Anna felt relieved when she saw the first foetus on the screen, and extremely happy when she saw the second one. She had always wanted twins. But when she was told there was a third one, she was filled with fear as she knew how risky it would be to carry three babies at her age. She was simultaneously terrified and ecstatic, her dream was coming true after so many years of trying!

When she broke the news to Tim, he was obviously shocked by the news, and thought she was joking just to wind him up! He had many concerns for quite some time, mainly about whether he could cope with bringing up three children and being around while they grew up, given that he was already 53 years old at that time. It was certainly a huge shock for him, but he adjusted to the idea quite quickly. Another major concern for the couple was their living arrangements in different countries – it was not the usual family arrangement, and having kids would complicate it even more.

Woes in The Womb

Despite these doubts and fears, the couple began to look forward with anticipation towards the long-awaited arrival of the new members of their family. But the journey didn’t get any easier. First, the doctor suggested to Anna on several occasions to have one or two fetuses removed, to increase her chances of a successful pregnancy due to her age. Tim and she insisted on keeping all of their babies, but it was a really hard decision as there was a big chance she might lose all of them if anything went wrong.

In a few months time, the couple found out that they were expecting three boys. One of the boys had a high risk of Down’s Syndrome, so they were advised to have them tested for it. Normally this wouldn’t be an issue, but with three babies to assess, the actual tests were nerve-wracking as the nurse had to be very careful in extracting the fluid from each individual sac.

As with any pregnancy, there were all the usual worries and discomforts. In Anna’s case, it was three times as challenging, given that she was expecting three buns in the oven. At one point, the boys grew up to a size such that one of the boys (Elliott) was being crushed by the other two. Thankfully, everything seemed ok after a couple of weeks, but those days were a very anxious time for the couple.

During the whole nine months of her pregnancy, Anna made sure that she ate correctly and only ate healthy food. She also read up on parenting books, eager to do the best job possible in raising her young brood. Tim was facing significant pressure at work and so was away for much of the pregnancy. But he did make sure that he was with Anna at every hospital check-up, which was a real help, as he was good at offering the sensible and rational perspective, and stopping her from worrying too much!

Friends, colleagues and children’s parents from school all chipped generously in to help the couple get kitted out for the new arrivals. In her years as a Montessori teacher, Anna had taught many children. When their parents learnt that I was pregnant, some parents formed a committee to collect pre-loved baby items for her. In the blink of an eye, they were blessed with buggies, cots, high chairs, many toys, huge amount of clothes and an ample supply of baby bottles and nappies. In fact, they didn’t need to buy anything for the boys in the first six months, apart from formula milk powder.

Welcome to The World! 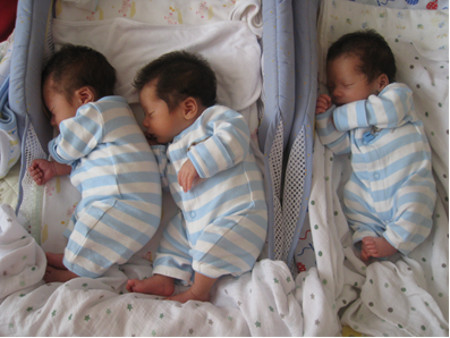 The triplets were born premature at 34.5 weeks, by caesarean section. Elliott Simon was the firstborn, then Tobias Gordon then Rory Nicholas. (Anna’s family in Beijing decided on the Chinese names, in keeping with tradition. As Christians, the family wanted to affirm that the boys are indeed blessings from God, so they were christened Elliott 天恩，Toby 天诺 and Rory天悦。)

Suddenly, the couple’s world had expanded from just the two of them to a family of five! It was no mean feat adjusting to the changes that this brought to their home.

Breastfeeding was an uphill struggle. If you know how any new mother grapples with the two to three hourly feedings, latching issues and milk supply woes, imagine all that times three! Indeed, it was extremely exhausting and overwhelming taking care of the triplets round the clock. Anna tried everything she had read up about or been told, but after two weeks, her milk supply simply “dried up”, and she had to feed the babies formula milk. Anna shares that, during that time, she felt like she was a failure as a mother, and really angry and disappointed at herself.

Even with two helpers, it was still a very tough job taking care of three babies. In the beginning, besides needing to be fed 8 times a day, each of the boys had to have his nappy changed 6 to 7 times daily. In the first few months, the boys slept, woke up, peed and “poo-d” at different times throughout the day (and night) and Anna couldn’t get even two hours of uninterrupted sleep.

Again, most newborn babies in Singapore suffer from high birilubin levels (jaundice) during the first few days and weeks. With three babies having jaundice at different levels and intensities, it was definitely challenging to keep track!. Elliot, the first born, was allowed to leave the hospital after three days, then Toby followed him a couple of days later. Rory was the last to be cleared to leave. This turned out to be a blessing in that it allowed Anna and Tim the space and time at home to adjust to their arrivals one at a time. They all had to go back into the HDU on a couple of occasions for a few days, but after a month their birilubin levels were down to normal.

Busy as a Bee!

Keeping track of three erratic schedules is not a task for the faint-hearted! Thankfully, Anna was a naturally organised person and kept records and charts of the pregnancy so it was natural to have a strict routine for when the babies arrived. They produced feeding and nappy change charts, to track when and how much milk each baby had, and when and how many nappies were changed for them. This information proved invaluable each time they went to the clinic for check-ups as they had all the charts for them to see. Every feed was logged by how much they drank and how many nappies were changed.

From time to time, friends dropped by to ‘help’ them out – it was really an excuse to get to carry the babies! The boys became mini “celebrities” in their home estate! Even a simple shopping trip was an expedition and a meet-and-greet for everyone! 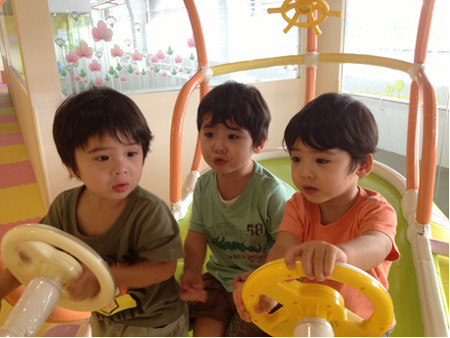 Over the months, Anna and Tim settled into a strict routine with the boys and family life. Mealtimes and bedtimes were fixed affairs, and meaningful activities were planned into everyday life.

Based on the knowledge that 70 percent of the personality of a person is formed by the age of three, Anna made an activity tick chart for each baby very early on, including English songs, Chinese songs, picture flashcards, English/Chinese vocabulary flash cards, baby Einstein, baby walker and baby Jumperoo etc. She followed her plans strictly and made sure all the boys did all the activities every day. It was draining at times, and definitely took much perseverance and creativity on her part to keep them engaged, but Anna enjoyed spending such times with her sons and has no regrets.

After all her hard work, Anna is beginning to see the fruits of her labour! Now well into toddlerhood, her boys have become very verbal and outgoing. They love to greet and talk to people wherever they go. They started to talk from 11 months, and by 17 months, they could say around 40 meaningful English/Chinese words. Now, at two and half years old, they can speak in full sentences, and sing many songs in both English and Chinese.

The biggest advantage of being part of the triplets is that each boy always has the company of his brothers, so they almost never get bored. And if one boy learns something, the other two learn from him very quickly.

Since they were eight months of age, the boys have also been invited to model for some magazines. In fact, they have had quite a few photo shoots for magazines over the years! They were also featured in advertisements by a couple of big companies, both in Hong Kong and Singapore. Needless to say, Anna and Tim are really proud of their sons. Raising triplets is indeed no mean feat, and we want to chime in with a “Job well done!” to this amazing couple! 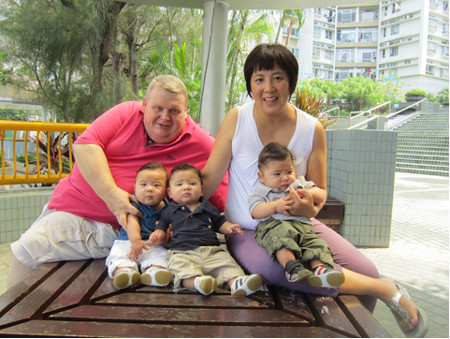