Why Is Coding The New Literacy For Your Child?

Does your child spend too much time in front of computers/tablets?

For a child, magazines are simply an iPad that does not work! The digital media is becoming ubiquitous, oftentimes even more accessible than traditional books. For tweens and teens, with smartphones on their fingertips, they access information readily and receive entertainment right away. Every day they discover new videos, new memes, new apps to play with and share with friends. Most of them born after Google was invented (in 1998), they are sometimes called Digital Natives.

The dichotomy between Digital Immigrants and Digital Natives

As adults, we are the Digital Immigrants; born before the Internet era, we are merely immigrating into this evolved world. Some of us may have fond memories of dial-up 56kp internet, recalling by heart our best friends’ landline home phone numbers and the ICQ echo alert sound. Looking at the Digital Natives, we often find it disconcerting about children’s excessive usage and dependence on technology, at home or at school. The same as what we observe in our classrooms – whenever we have “no laptop time”, students act as if we are taking their dear lives away.

The Internet of things (IoT) phenomenon

The Internet of Things (IoT) is the network of physical objects paired with electronics or software, to add more value to its existing function. It has the ability to stay connected or transmit data from the different devices to the web. This translates into a multitude of computing power and interconnectedness. By 2017, the IoT market will surpass PC, tablet and phone market combined.

“Connecting products to the Web will be the 21st century electrification.”
– Matt Webb, CEO of BERG Cloud

A tool that requires mastery

Technology and computing devices are just like any other tools. Before the tablets and phones, there was TV. The tool itself is neutral; it can be addicting and used to consume mindless TV shows, or it can be directed toward effective supplemental learning. Just like any tools, it requires discipline and skills to harness its benefit.

From consumer to creator

Professor Mitch Resnick at MIT’s Media Lab, a renowned educator and proponent in coding education for K-12 students, believes that although our children grow up in a world in which technology, the web and connectedness are learnt as it were organically, this does not mean they are fully prepared. “Young people today have lots of experience… interacting with new technologies, but a lot less so of creating [or] expressing themselves with new technologies. It’s almost as if they can read but not write”.

As Professor Resnick mentioned, becoming a creator in technology leapfrogs us from a “reader” to “writer”. Coding is a skill that bridges the gap between the savvy consumer and a creator with technology. 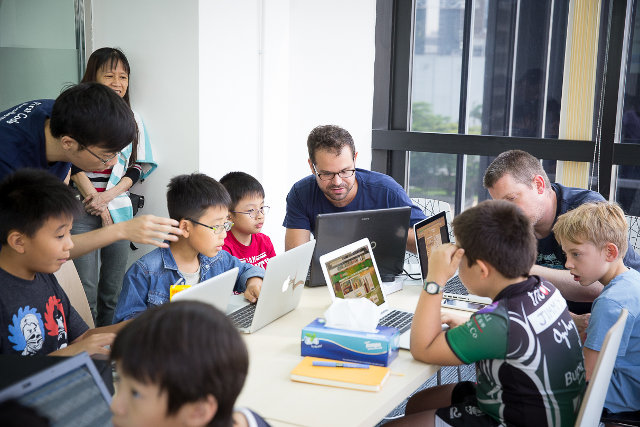 Knowing how to code enables us to express ourselves with technology. Knowing how to code enables to transform an idea and code it up into our own apps or websites. Beyond the technical aspects, learning to code requires a breakdown of computing processes and problem structure. Through that, it leads to a deeper understanding of the interconnection of technologies. Eventually, it opens up a whole new world of possibilities in creativity.

Yet as educators and parents, coding is inevitably daunting at times. Fortunately, with the proliferation of online resources and improving technologies, learning to code is becoming more accessible and mainstream. In the next post, we will demystify what coding is all about and its educational benefits to the 21st-century learner.