Touching Story From A Single Mum

I am a proud single mother of two beautiful kids. In the absence of a father, mothering has been my profession, my hobby, my life.

Raising my kids alone has driven me to work harder. I teach in the morning and I freelance in the evenings at home. I used my writing craft to earn extra income for my kids’ needs. It was hard for me to have two jobs at a time but knowing there are children with me, there is no time to give up. 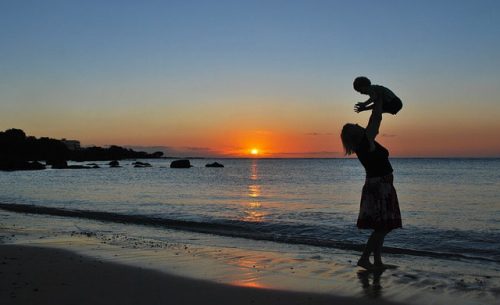 At first, freelance writing was a difficult task. I had to condition me and my kids with a routine where they can keep me in silence while writing. I created the night in such a way that they sleep early for me to talk with clients freely. And for quite some time now, my kids were used to seeing me in front of the notebook when I am home. They used to peek on the window just to make sure I am there writing.

One night, I felt the need for me not to log in and write because words seemed to have gone out of my head for a vacation. I sat sneakily behind my two kids who were watching television at that time. They hardly noticed me because the show was interesting. They were talking about what I thought were just some kid stuff when I began to listen.

My eldest was asking her brother what he would like to become someday. The four-year-old Nashee looked at her sister and said, “I want to become a soldier and when I get to have lots of money, I will buy mama some hand gloves.” Shan, my daughter surprisingly asked him what he’s going to do with the gloves. Nashee, in his innocent look and frail voice, replied,”So mama will not harm her hands when pressing on the keyboard for long hours…”

Tears slowly crawled out of my sleep-deprived eyes. Hearing those words was more rewarding than the dollars I get from staying late at night and rushing web contents. I realized how precious I have been regarded by my children. I looked at my hands and have seen how they have worked for motherhood at a very young age. I felt my hands one after the other and I knew there is no other better role than being a mother. These hands are the same hands I have used and neglected… the hands which my son would want to take care of.

I am twenty-eight and my hands speak the heart of a very young mother who stood firm for her role.