13-year-old Natalie Giorgi died on 27th July 2013, after taking a bite into a Rice Krispies treat while at a popular summer camp in Sacramento with family and friends. Turns out that they were not informed accurately about the food that she was eating. The treat offered was iced with chocolate and peanut butter and she was allergic to peanuts. But even though Giorgi spit the treat right away after tasting peanuts, the bite was enough to cause her to have an anaphylactic shock and cardiac arrest. Her father, a doctor, administered an EpiPen, which contains epinephrine, three times before she stopped breathing. It is reports like this that cause a rage in me.

How did this happen?

Didn’t the organizers know that there were students like Giorgi who had food allergies?

Why didn’t they list out the ingredients accurately so that people like Giorgi can be alerted more accurately?

All these questions were swirling in my mind.

In fact, I wasn’t aware of the severity and risk of a food allergy until my own child had it.

Unknown to me that Samuel had an allergy to eggs and dairy then, I was shocked to see him in that condition and rushed him immediately to the nearest Pediatrician for help. Upon reaching the clinic, the Pediatrician warned me that I should dial for the ambulance should it happen again, because we can potentially lose Samuel. She explained that this shock is a potentially life-threatening allergic reaction that can affect a number of organs at the same time.

Many unaware of the severity

What is an Anaphylactic Shock? 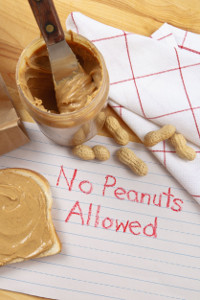 An anaphylactic shock usually occurs when blood vessels enlarge excessively due to an allergic reaction, which causes a significant drop in blood pressure. This can result in inadequate blood flow to the organs in the body and is an emergent, life-threatening condition. Though food allergy is the leading cause of anaphylaxis outside of the hospital setting, not all food allergic reactions result in anaphylaxis.

After the experience with Samuel, I became extremely careful with the food that is offered to him. I will assess the ingredient list at the back of any food package and never put any food that is questionable into his mouth. Many find me weird when I took a longer time staring at the ingredient list before buying an item off the shelves at the food mart or when I ask the service crew diligently on the kind of ingredients used for their dishes. Many will give me a judgmental look thinking that I am just a picky consumer.

Like Giorgi’s parents, I really hope too that the awareness on the dangers of food allergies will be raised around the world and that more caution and care for those (afflicted) will be supported and taken care of. So that such accidents like Giorgi’s can be avoided. And I really want to feel safe bringing Samuel out to the restaurants to eat.

What are your thoughts on this? Share them with us!