MMR vaccine is a combination vaccine shot against Mumps, Measles and Rubella (also called German measles). The vaccine is a mixture of three live attenuated viruses and given in Singapore schedule at 15 months and another at 7 years old. The second vaccine is to further protect those children who had poor response to the first dose.

What are the problems associated with contracting Measles, Mumps and Rubella? 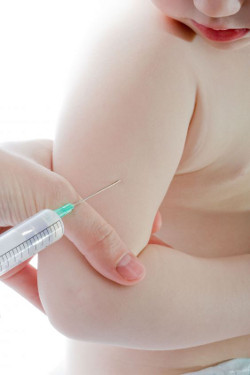 Measles infection use to be very common, affecting tens and thousands of children a year before the introduction of measles vaccine. Now in Singapore there are about 100-150 cases reported a year. Measles vaccination has averted an estimated 1.4 million measles deaths worldwide since its introduction. It is a contagious viral infection common in children but it can be contracted at any age.

Early symptoms include coughing, runny nose, stuffy nose, malaise, red eyes, tearing and fever. Two to four days after these initial symptoms, blue-white spots with a red background (Koplik’s spots), located on the inside of the cheeks near the back molars start to appear. They are accompanied, either at the same time or slightly later, by the appearance of the rash.

The rash is red and it begins at the face and around the ears spreading downwards. It is not an itchy rash. Although most people with measles recover completely, there are cases when a person can be very ill and develops complication such as ear infection, pneumonia, encephalitis (brain infection) and in rare cases multi-organ failure and death.

Mumps is a common childhood viral infection and is a highly contagious, which causes swelling in the parotid glands (the glands which produce saliva). Initial symptoms are facial pain, swollen parotid glands in neck, temples or jaw and fever, headache and sore throat. The serious complications can be damaging such as:

Orchitis. Males may experience pain or lumps in their testicles and swelling in the scrotum. However this rarely causes infertility problems.

Rubella, also known as German measles, is a highly infectious viral infection that commonly affects children. Although rubella infection is often mild, it can be serious when the infection occurs in pregnant women especially in the first 20 weeks of pregnancy. The baby may be born with a congenital rubella syndrome which is a condition comprising serious organ defects of the heart, brain, eyes and ears.

A child with rubella may not look or act sick, but symptoms may include:

Combination vaccine and its advantage

The MMR is one of the recommended childhood immunizations. Generally, proof of MMR vaccination is required for school entry.

One MMR will protect most individuals from contracting measles, mumps, or rubella throughout their lives. The second MMR is recommended to cover those individuals who may not have received adequate protection from the first MMR Reported adverse reactions are fever, mild rash, malaise, injection site pain and redness.

The advantage of the combined vaccine is it prevents the child from having 3 separate shots thus inducing immunity less painfully. Administering the vaccines in three separate doses does not reduce the chance of adverse effects, and it increases the opportunity for infection by the two diseases not immunized against first. With the number of vaccines available these days, it is more efficient to give combination vaccines than not.

The controversy of MMR and Autism

The scientific consensus is that no credible evidence links the vaccine to autism, and that the vaccine’s benefits greatly outweigh its risks of the development of the infection.

The author of the controversial paper of linking Autism with MMR, Dr Andrew Wakefield has been found to change patient’s data and results of the trial that was used as evidence. He was also found to have received funds from lawyers who were representing families with Autistic children in trying to sue vaccine manufacturing companies. After investigation, Dr Wakefield was struck off the general medical council and his paper was retracted from the Lancet. Since the publication of Dr Wakefield’s paper, no other investigators or trials were able to show the link between Autism and MMR or find measles viral particles in any of the children with Autism.

By Dr. Janice Wong of Thomson Paediatric Centre
Dr. Wong graduated from the University of Sheffield with a Bachelor of Medicine and Bachelor of Surgery degree in 1996. Her post-graduate qualification includes a Membership of The Royal College of Paediatrics and Child Health, United Kingdom, with a distinction in paediatric medicine. She is also a Member of the Singapore Paediatric Society, Asian Oceanic Child Neurology Society and Australia/New Zealand Child Neurology Society.