Apart from the common coughs and colds, there are a whole host of common illnesses that children often develop as part of their growing process. Being able to identify your child’s symptoms and potential illness is important in order for you to respond appropriately. 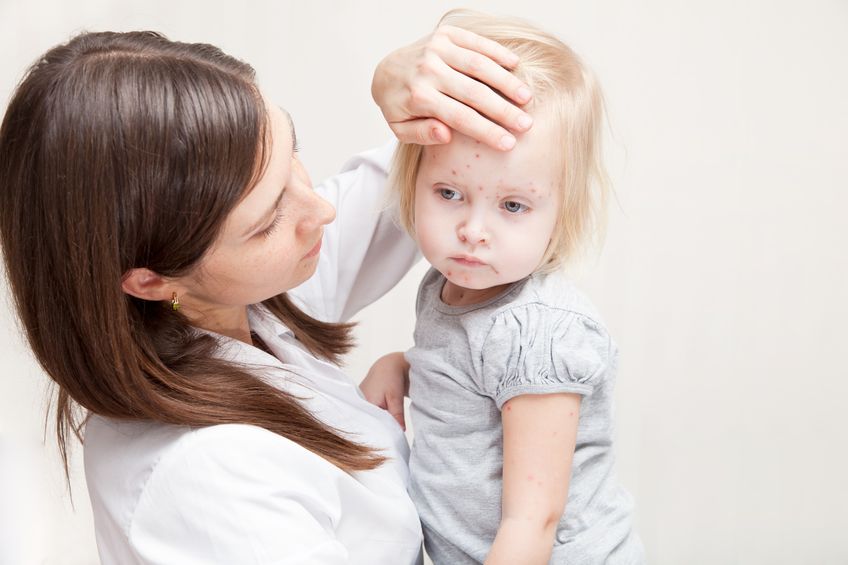 Roseola, also known as 假麻 or “false measles” in Singapore, is a common viral infection, and commonly affects children aged between six months and two years. It is caused by human herpesvirus types 6 and 7 and is spread through airborne droplets from the nose and throat, or by direct contact with these secretions.

Signs and symptoms of roseola

Children often develop a sudden, high temperature of up to 40°C which may last about three to five days. Upper respiratory symptoms such as sore throat, cough, runny nose or nose congestion may also be present. The high fever often ends abruptly, and at about the same time a pinkish-red flat or raised rash appears, first over the body and neck, and later on the face, arms and legs. The rash is non-itchy or painful and lasts from a few hours to a few days. Roseola may also cause a fever without a rash.

The disease is usually mild and self-limiting, and there is no specific treatment for roseola. Maintaining your child’s fluid intake and managing the fever with anti-pyretics is all that is usually required. No treatment is necessary for the rash as it resolves spontaneously.

Croup is a viral infection commonly seen in children up to five years old, in which the infection causes swelling of the vocal cords, voice box (larynx) and windpipe (trachea). This often leads to a barking cough or hoarseness, especially when a child cries.

Signs and symptoms of croup

Croup often begins like a normal cold followed by a hoarse voice, and a harsh, barking cough. If the swelling is more significant, breathing difficulty may ensue, and there may be a harsh squeaky noise when your child breathes in, called ‘stridor’. Stridor is usually present only with crying or coughing, but if the disease becomes worse, stridor can also occur when he is sleeping or relaxed. In severe cases, he may breathe very fast, or you may observe ‘retractions’, where the skin between the ribs pulls in during breathing.

A mild croup attack is when your child has a barking cough but has no stridor or difficulty breathing. This can usually be managed at home under close supervision, using anti-pyretics to manage the fever, trying to keep him calm as breathing is often more difficult when he is upset, and avoiding exposure to tobacco smoke.

However, if your child has difficulty breathing, retractions, stridor, or appears unwell, see your doctor immediately. Steroids may be given orally or via a nebulizer machine, so as to help reduce the swelling of the upper airway and make breathing easier. In some instances of severe croup, hospitalization may be required if he does not respond to the above treatment.

Conjunctivitis, commonly called pinkeye, is a very common eye infection, especially among children under five years. It involves the inflammation (swelling) of the conjunctiva, which is the thin delicate membrane that covers the whites of the eye and lines the inside of the eyelids.

Conjunctivitis can be caused by an infection (virus or bacteria) which is highly contagious, or by an allergic reaction which is not contagious. Sometimes, it can be due to irritants in the environment, such as chemicals (e.g. chlorine, soap), and air pollutants (e.g. smoke or fumes).

Signs and symptoms of conjunctivitis

Bacterial or viral (infectious) conjunctivitis usually presents with a pink eye, then spreads to the other eye. It can also result in discharge from the eyes, which can cause the eyelids to be puffy, or stick together especially when your child wakes up in the morning. In bacterial conjunctivitis, the discharge is often yellow, while in viral conjunctivitis, it is often clear, and is almost always accompanied by flu-like symptoms. 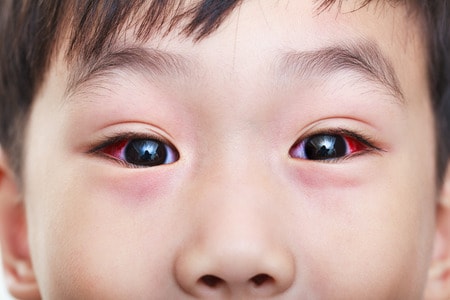 Allergic conjunctivitis usually starts in both eyes at the same time. The eyes are often itchy and watery, and there may be accompanying symptoms like itchy, runny nose and sneezing, or a history of other allergic conditions.

However, it is sometimes difficult to differentiate which type of conjunctivitis is present, because all-cause redness and swelling of the conjunctiva.

Treatment is tailored depending on the cause of conjunctivitis.

In infectious conjunctivitis, saline eye drops or gentle cleaning of the eyes with cotton balls soaked in warm water may help your child feel better. Clean in one direction only, and discard the cotton ball each time to prevent recontamination. Antibiotic eye drops may be prescribed by your doctor if bacterial conjunctivitis is suspected. Make sure your child washes their hands frequently, and avoid touching or rubbing his eyes. He should not share any towels with anyone else in the family. He is infectious until discharge from the eyes has disappeared.

In allergic conjunctivitis, antihistamines administered as eye drops or given orally may be prescribed.

If your child’s symptoms last longer than one week, despite using eye drops, it’s best to go back to your doctor, for which an onward referral to the paediatric ophthalmologist can be made.

Impetigo is a common bacterial skin infection seen in pre-school children caused by one of two bacterial organisms – Staphylococcus aureus, and Streptococcus pyogenes (Group A Strep). These bacteria often enter the body through a point where the skin is broken (for instance at the site of an insect bite), or in skin conditions such as eczema and chickenpox, resulting in inflammation and infection. However, impetigo can also occur on healthy skin.

How can impetigo spread

Signs and symptoms of impetigo

Impetigo can occur anywhere on the body but often occurs around the nose and mouth and on the arms and legs.

There are 2 types of impetigo:

If you suspect your child has impetigo, it is important to see your doctor, so that treatment can be started – Topical antibiotics are often given for mild cases, and oral antibiotics for more widespread cases.

At home, you can remove the crusted areas with a wet towel after bathing. Cover the lesions with watertight dressings and cut your child’s fingernails to try preventing him from scratching the lesions as much as possible. Make sure he washes his hands regularly, and keep his bedding and towels separate from the rest of the family.

Your child can go back to school after 24 hours of treatment and when the sores are completely covered with dressings. The lesions should clear up in five to seven days with treatment.

Gastroenteritis is a gut (intestine) infection, which causes diarrhoea (frequent loose or watery stools), and sometimes vomiting. The vomiting may settle quickly, typically lasting 6-24 hours, but the diarrhoea can last up to 10 days. Other common symptoms include fever and abdominal pain.

Gastroenteritis can be caused by many different germs – Viruses such as rotavirus and norovirus are usually responsible for the infection. Bacteria such as salmonella and campylobacter may also cause gastroenteritis, as in food poisoning. 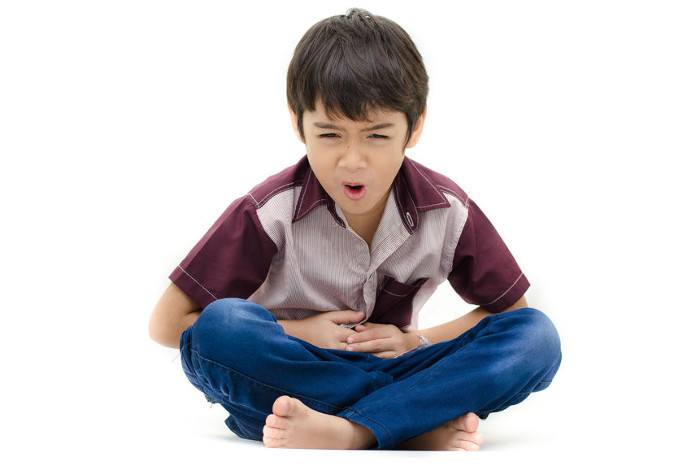 Signs and symptoms of gastroenteritis

Apart from diarrhoea and vomiting, other common symptoms include fever and abdominal pain. Your child may also feel unwell and do not want to eat or drink.

Children with mild gastroenteritis can be looked after at home. The main treatment is to ensure that your child remains well hydrated through an adequate intake of oral fluids. Your child is infectious, so wash your hands well with soap and warm water, particularly before preparing meals or eating, after nappy changes, or after cleaning up vomit.

For your infant, you can continue to breast or bottle-feed but feed smaller amounts more often. You can also give an oral rehydration solution (e.g. hydralyte) to replace fluids and body salts. If you are feeding formula milk, changing to a   lactose-free formula may help reduce the duration of the diarrhoea.

For an older child, you can offer small amounts of clear fluid (e.g glucose water, barley/rice water) often – i.e. a few mouthfuls every 15 minutes and slowly increase the volume if he tolerates it well with no more vomiting. Oral rehydration solutions can also be given. Avoid soft drinks, undiluted fruit juices, or commercial sports drinks, as they contain too much sugar and can make the diarrhoea worse. You may offer bland foods (e.g. bread, soups, porridge) after 8 hours without vomiting, or when he is hungry and requests for food.

If your child is vomiting frequently and unable to keep any fluids down, has blood in the stools, or shows signs of dehydration such as lethargy, dry tongue and/or lips, crying with no tears, not passing urine for the last 6 hours or more (for infants less than 5 wet diapers a day), see your doctor immediately. 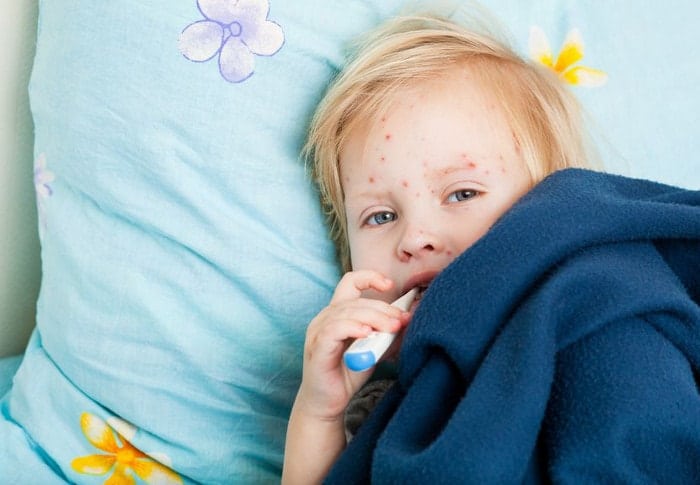 Chickenpox is a highly contagious disease caused by the varicella virus. It can easily spread in the air through coughing and sneezing, or via direct contact with the chickenpox blisters. An infected person can spread the disease from two days before the rash first appears until about one week later when all the last blisters have dried up – this is called the infectious period.

Signs and symptoms of chickenpox

Fever and rash are the most common signs of chickenpox. The rash usually first appears on the chest, back or face. It appears in crops and can move to other areas of the body including inside the mouth. The rash first looks like small pimples, but later become blisters.

These signs and symptoms usually appear from 10 to 21 days after first being exposed to someone with chickenpox – this is called in the incubation period.

Most children with chickenpox are unwell for about five to seven days. Treatment is mainly directed at reducing the itch, encouraging fluid intake, and controlling the fever with anti-pyretics – Parents can give paracetamol but should avoid ibuprofen (also known as ‘brufen’).

You should see your doctor immediately if your child is refusing to drink, the rashes are becoming redder, swollen or painful, or if there are associated symptoms such as shortness of breath, stiff neck, headache and confusion.

You should inform the school if your child gets chickenpox. He should not go to school until the last blister has dried, and is certified to return by your doctor. Other members of the family may also need to stay away from your child during the infectious stage. This includes newborn babies, pregnant women who have not had chickenpox before, and people with weakened immune systems (e.g. on chemotherapy).

Chickenpox can be prevented via vaccination. The chickenpox vaccine is expected to provide life-long immunity and is safe in protecting those who have never had chickenpox. Although it is not compulsory in Singapore to vaccinate children against chickenpox, it is best that children have the vaccination between 12 to 18 months. Children below 13 years of age should receive two doses with a recommended interval of at least three months, while those 13 years and above should receive two doses at six weeks interval.