How Becoming a SAHM Led to My First Children’s Novel

Truth be told, being an author was never one of my childhood dreams. I remember when I was in my 20s, after reading a crime thriller packed with twists and turns, I thought, “I’ll never become an author! Thinking and writing a plot like this is too hard!”

But little did I know, 20 years later, the first book of my middle-grade series – My BFF is An Alien – debuted in March 2020 and it was all because I became a mum.

My BFF is An Alien: Amazon

Before I had children, the thought of becoming a stay-at-home-mum (SAHM) had never crossed my mind, even when I was pregnant. It was not only because we needed the income but more importantly, I had always loved my jobs.

⇒ Related Read: Why I Love Being A Stay-At-Home-Mum And Don’t Regret It

Up till about a year ago, I was a full-time working mum. I had worked for 14 years as a financial journalist and editor with major global trade publications. Despite the heavy workload which sometimes ended in working late nights, I loved the adrenaline rush of breaking news and how fast-paced the industry was.

But after having my eldest daughter, Big E, and settling more into my role of a mother, my priorities started to shift. It no longer became about winning accolades or chasing the next promotion, my children became my priority. 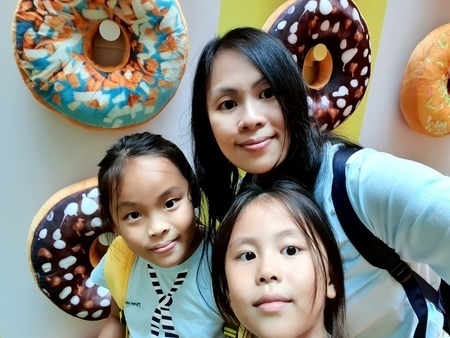 Vivian with her two daughters

After having children, every weekday became all about rushing home. I would half-jog to and from the MRT station just so I could spend whatever precious time I could with them before they went to bed.

It didn’t help that my children were early-sleepers so when I got home, I would shower, gobble down the dinner my mother prepared, read a bit with my kids, then put them to bed – all in a matter of an hour or so. At times when I couldn’t make it back before they fell asleep, I would feel disappointed and guilty.

At work, I would avoid long lunches and idle chats in the office. I joked with my colleagues then I had to work at 110% of my capacity (which was really the truth) just so I could finish my work and leave on time. Mornings weren’t any better. On weekday mornings, I’d jump out of bed, haul my kids to school then hustle to the office just so I can finish my work on time.

When my eldest daughter, Big E, started primary school, I would often forget to sign papers she brought home or was not aware she had a test the next day. I wasn’t even sure of her exam schedules then. We were just on survival mode every day. I could only ask that my children slept, ate and went to and came back from school safely. I didn’t have time to think about any other matters. 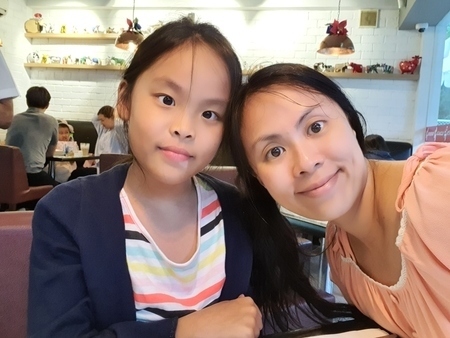 Vivian with her eldest daughter, E

Sometimes, I got home from work frazzled and grumpy and most times when I was with them, I was rushing. Whatever little time I spent with them before and after work didn’t feel like quality time. Sure, we had the weekends, but it was just two days and the majority of the week my daughters either didn’t see their mum or they saw a crummy version of her.

I would often feel this guilt and resentment that I was rushing through their childhoods. At times when I looked at Big E, I felt like I missed out so much. Just yesterday she was a toddler demanding all my attention, then I blinked and she became a tween.

⇒ Related Read: What You Never Expected about Raising Preteens

The guilt and sadness hit me the hardest when my youngest daughter, Little E, was in her final year of pre-school. I hated that six years went by just like that and I had missed too much in all these years of rushing.

I finally decided I didn’t want to miss out on their childhood anymore. I needed to slow down and really be with my kids while they were still kids. I needed to build a life that I want with them. I ran through my options of what I could do on a part-time basis from home.

I shot down some initial ideas until finally, I settled on one – I could write a book and there was no doubt it had to be a children’s book. I’ve always loved reading with my children and often made up bedtime stories for them. But most importantly, I wanted to write FOR them.

So, I did my homework. I read up on fiction-writing, brainstormed on story ideas, researched on publishers and middle-grade books in the market and read a lot of books from this genre.

Though I was confident and excited about the story idea I finally came up with, I knew getting published was still a long shot. But I told my husband I had to at least give this a try and even if I failed, at the very least, I knew I tried.

I finally called it quits at work and managed to complete my manuscript in five months – something which would have probably taken years if I was working full-time. I submitted the manuscript to a few local publishers, though at that point in time, I already had in mind one publisher I wanted to work with.

Imagine my exuberance when that publisher replied after a few months to say they were interested in publishing my book and saw the potential of developing it into a series. And as they say, the rest was history.

These days, I work on my books and some freelance writing assignments in the morning when my kids are at school, then it’s all about them when they get home.

Being a SAHM is no easy feat when you no longer outsource the work you otherwise would when you’re working fulltime. Your job is basically endless (and often thankless!) when you clean, cook, coach, teach, schedule, mitigate fights and maintain peace as CEO of the household. Honestly, my former career felt easier in comparison! 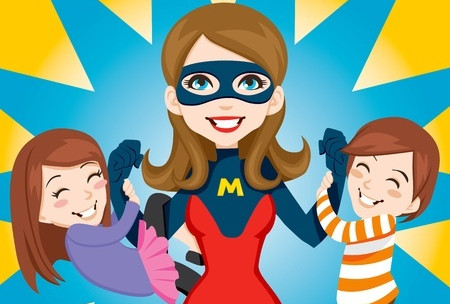 I know not everyone can or want to be a SAHM. But I do count myself lucky that our finances allow me to do so while pursuing a dream simultaneously.

I love being hands-on with my kids and being there for them. I love how their faces beam when I’m the first person they see when they get off their school bus and when they see me volunteering at their school. I love that I have time to eat with them and talk about their day. I also love that I’m still writing and enjoying developing plotlines for my books and that my life no longer feels like a big rush (only on some days with deadlines!). 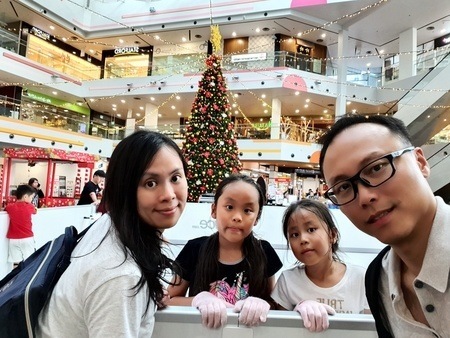 Vivian with her family

As much as I love my life now, guilt still creeps in once in a while. I have a very supportive husband, but it’s hard not to feel guilty about not contributing to the household income with a fulltime income and accumulating for our nest egg.

I do get scared at times thinking if I would become irrelevant in my former industry. I still get asked a lot if I would return to my former career. I don’t really know yet, but right now, I do know I want to work at this shot I have at building the life I want with my kids.

As an American journalist and novelist, Joyce Maynard said,

“As much as we watch to see what our children do with their lives, they are watching us to see what we do with ours. I can’t tell my children to reach for the sun. All I can do is reach for it, myself.”

I hope my children realise that it was because of them that I dared to dream to become an author. Even if the dream only started when I turned 40.

Photos and text by Vivian Teo.

Vivian Teo worked as a financial journalist and editor for 14 years before taking a career break to spend time with her two children and write about things close to her heart – these including her blog, The Stuff Childhoods Are Made Of and her first middle-grade novel, My BFF is An Alien (available on Amazon), which debut in March 2020.

Want to be featured here? Leave your contact here and we’ll be in touch.

Stay in touch! Subscribe to our Telegram here for all our latest updates.