From songs waxing lyrical about the moon, to rearrangements of popular festive tunes, Singaporeans can immerse in a visual and auditory experience at our historic National Monuments through an all new Music At Monuments – National Heritage Board x Singapore Chinese Cultural Centre (NHB x SCCC) digital music performance series. From now till December 2020, NHB’s Preservation of Sites and Monuments division and SCCC will be jointly rolling out a line-up of four music videos featuring Singapore talents, all produced at our National Monuments. They will allow everyone to view these icons of our built heritage in a different light, while showcasing the diverse talents of our local musicians.

Alvin Tan, Deputy Chief Executive (Policy & Community), NHB, said: “We came up with the idea of staging musical showcases at our monuments because we wanted to combine the magic of musical performances with the ambience of historical settings to create a new monumental experience for our audiences. At the same time, these digital showcases are part of NHB’s efforts to create digital content to maintain access to arts and culture, and serve as a source of revenue for our local artistes and arts groups.”

The four National Monuments that will take centre stage in this music performance series are the Asian Civilisations Museum (ACM), Goodwood Park Hotel, Jurong Town Hall and Sun Yat Sen Nanyang Memorial Hall (SYSNMH). Filmed against the backdrop of these iconic buildings, Music At Monuments will feature the vocal and musical prowess of homegrown talents The Apex Project, Derrick Hoh, MUSA and Fingerfunk as they present performances that are associated with the upcoming festivals – Mid-Autumn Festival, Chong Yang Festival, Deepavali and Christmas respectively. Members of the public can catch these digital music performances on NHB’s and SCCC’s social media platforms. The four videos will be rolled out monthly from September to December 2020.

Low Sze Wee, Chief Executive Officer, SCCC, shared “Pop culture in general, and pop music in particular, have strong appeal amongst youths. This has been reflected in the strong responses to our ongoing TGIF Music Station, annual Sing• Lang concert and SG:SW I Write the Songs festival. We are delighted to partner NHB in this meaningful collaboration to provide our local musicians with a unique platform to showcase their talents and introduce our shared heritage and culture to the public.”

The first music video of the series will be launched today, in conjunction with the upcoming Mid-Autumn Festival – a well-loved festival amongst the Chinese community in Singapore and Asia. Local a cappella quintet The Apex Project will perform a medley of English and Mandarin songs associated with the moon, such as ‘Fly Me to the Moon’ and ‘月亮代表我的心 (The Moon Represents My Heart)’, at SYSNMH. Gazetted as a National Monument in October 1994, the memorial hall sheds light on the lesser-known details of Singapore’s and Nanyang’s involvement in the 1911 Revolution, and the contributions of our local Chinese community.

In October, the spotlight will be cast on ACM – a symbol of Singapore’s history from colonial port city to independent nation state. Popular Mando-pop singer Derrick Hoh will perform the classic ‘写一首歌给你 (Write You A Song)’ composed by xinyao pioneer Liang Wern Fook. While not as widely-celebrated in Singapore, Chong Yang Festival is observed by the larger Chinese community and is associated with scaling new heights – an aspirational theme representative of, and espoused in, our local xinyao culture.

The third music video, slated for release in November, will take viewers to the Jurong Town Hall – a testament to Singapore’s rapid growth and industrialisation in our post-independence years. Popular for their instrumental compositions that reinterpret Chinese music in a contemporary style, local trio MUSA will perform their rendition of a popular Deepavali classic, ‘Unnaikkandu Naan Aada உன்னனக்கண்டு நான் ஆட (As I Dance Upon Seeing You)’, ahead of the major festival celebrated by the Indian community.

Rounding up the series in December is a Christmas music video featuring electronic R&B and hip-hop quartet, Fingerfunk. The multi-genre group will perform an all-time favourite Christmas hit, ‘All I Want for Christmas is You’, at Goodwood Park Hotel, a prominent landmark in the Orchard area for its unique architecture.

Linda Wee, General Manager, Goodwood Park Hotel said: “Goodwood Park Hotel is honoured to be a part of Music at Monuments. Engaging the public using the language of music to commemorate icons of Singapore’s built heritage with our local talents really reasonated with us. This project is additionally meaningful for us as the hotel also celebrates its 120th anniversary this year with a legacy of timeless elegance since 1900.”

Artiste Derrick Hoh shared: “I am excited to be part of Music at Monuments, where I am able to send love and joy to everyone through my music and our beautiful National Monuments. I will be singing the song “写一首歌给你” which will be released close to the Chong Yang Festival. The Chong Yang Festival is a time where Chinese people ascend themselves literally, climbing mountains and hills as a custom. The past few months have been a trying period for many artistes; I hope this music video will remind us Singaporeans of our beautiful cultural landscape, created by the same group of people whom I care about and respect so much. Let’s continue to carry hope in our hearts and continue to reach new heights, together as one.”

Music At Monuments – NHB x SCCC is part of the larger #SGCultureAnywhere initiative from the arts and cultural sector, and is also a project supported by the Digitalisation Fund under the Ministry of Culture, Community and Youth’s Arts and Culture Resilience Package. Please refer below for more information on the series. To view the full series of digital music performances and for information on the publish dates of the individual music videos, please visit www.roots.sg or www.singaporeccc.org.sg.

Co-presented by the Preservation of Sites & Monuments division of the National Heritage Board and Singapore Chinese Cultural Centre, Music at Monuments – NHB x SCCC is a series of digital music performances featuring homegrown talents performing curated tunes at our National Monuments.

The first video will launch on 24 September in conjunction with Mid-Autumn Festival. Bask in the voices of local a cappella band The Apex Project as they present a medley of moon-themed songs to celebrate Mid-Autumn Festival at Sun Yat Sen Nanyang Memorial Hall, Singapore’s 33rd National Monument!

About the four digital music performances:

Bask in the voices of local a cappella band The Apex Project as they present a medley of moon-themed songs to celebrate Mid-Autumn Festival at Sun Yat Sen Nanyang Memorial Hall, Singapore’s 33rd National Monument!

Sun Yat Sen Nanyang Memorial Hall is one of the few surviving examples of villas that were once common sights in British Singapore. As its name clearly suggests, the building is strongly linked to the Chinese revolutionary Sun Yat Sen. Moreover, it serves as a reminder of the contributions of Chinese pioneers and their historic connection to the 1911 Chinese Revolution. The memorial hall was gazetted as a National Monument on 28 October 1994. Read more about it here.

About The Apex Project 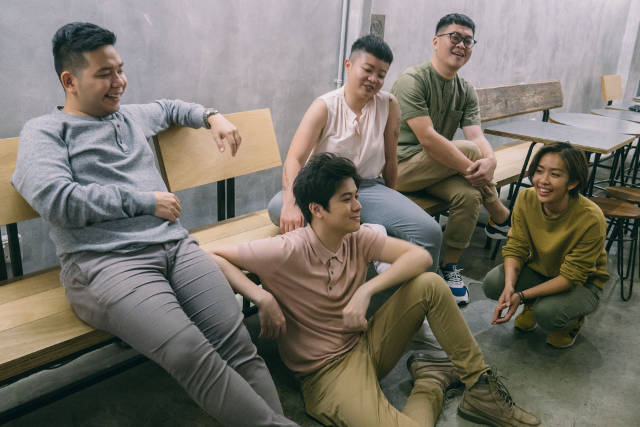 The Apex Project is a Singaporean acappella band formed in 2016. Within a span of three years, they have engaged in more than 40 local and international performances and released videos that garnered over two million views on Youtube, Facebook and Weibo. Their self-produced videos were lauded by local and international media like Mediacorp’s Channel 8 News and Taiwan’s Online News. The Apex Project was also commissioned to compose, perform and produce a theme song and a sub-theme song for Channel 8 drama “My Friends From Afar” in 2017.

In 2018, The Apex Project was invited to perform at the International Acappella Music Festival Tour in Hong Kong alongside award-winning acapella bands The Nor’easters from Boston and Accent Vocal, a collaboration between musicians from several countries. Their pop/jazz repertoire with a theatrical twist has also won numerous awards locally and internationally.

Be serenaded by the voice of local singer-songwriter Derrick Hoh as he presents his own rendition of the xinyao classic ‘Write You a Song 写一首歌给你’, against the backdrop of the historic Asian Civilisations Museum, in celebration of Chong Yang Festival.

Situated at the month of the Singapore River, the Former Empress Place Building was an important government building in Singapore up to the 1980s. Constructed by Indian convicts, the building once housed key administrative departments. The building was gazetted as a National Monument on 14 February 1992. Read more about it here. Derrick Hoh is an established singer-songwriter in the Mandopop scene.

He started his career as a pop idol and established himself as a professional singer-songwriter with three Mandarin Albums, one English EP and multiple hit singles under his belt.

He is the first Singaporean Artiste to achieve #1 on Singapore iTunes Store with his own composition, on top of achieving a total of 20 million Youtube views for his songs.

Derrick also received many awards including the Mnet Asia Music Awards for Best Asian Artiste in Singapore and several Top 20 Songs in the Global Chinese Music Awards. Apart from singing, the multi-talented Derrick is involved in acting and directing music videos.

Celebrate the festival of lights with local trio MUSA as they serve up a lively performance of popular Deepavali classic ‘Unnaikkandu Naan Aada உன்னனக்கண்டு நான் ஆட (As I Dance Upon Seeing You)’ at Jurong Town Hall. 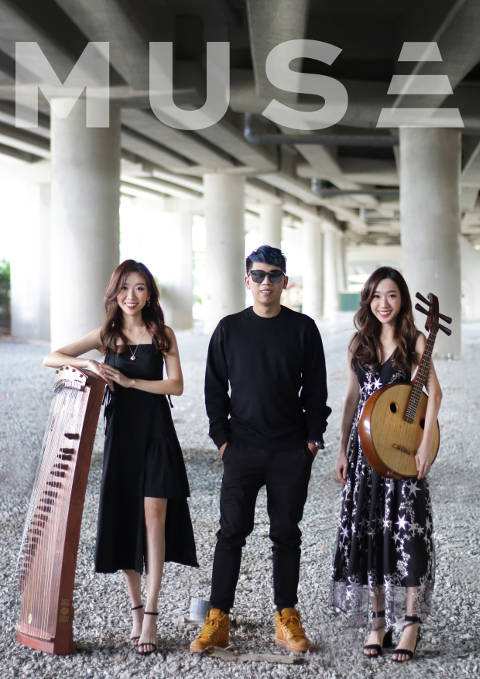 Formed in mid-2015, MUSA comprises Zhongruan soloist Su-Min and Guzheng soloist Su-Hui, both scholars of the National Arts Council with a Master from the Shanghai Conservatory of Music; and composer/ arranger Dayn Ng, who graduated with an Honours Degree in Music Composition from the Royal College of Music.

MUSA believes in creating a new contemporary identity that is representative of Singapore’s interculturalism yet retaining the traditional techniques and characteristics of Chinese music in their creations. Their original and rearrangement works can be found on their YouTube and Facebook page at MUSA_sg. The group has been featured in the local and foreign media such as The Straits Times, Channel News Asia, Hello Singapore 狮城有约, 883 JIA FM 与美香通行 and China’s Guzheng Net. They were invited to perform at one of China’s top shows Day Day Up, Padang Indian Ocean Music Festival 2017, as well as the Huayi – Chinese Festival of Arts 2018.

Join in the festive cheer and sing along with Fingerfunk as they perform their take on the all-time favourite Christmas hit, ‘All I Want for Christmas is You’, at Goodwood Park Hotel. A perfect way to start the holiday season!

The Tower Wing of the present-day Goodwood Park Hotel was home to the German Teutonia Club, one of the earliest European national clubs in Singapore. It is a prominent landmark in the Orchard area for its unique architecture. The charming structure serves as a reminder of the Germans’ contributions to trade in early colonial Singapore, and of the impact of the First World War on the local German community. Goodwood Park Hotel is also a monument to the flourishing hotel industry in Singapore during the colonial period and beyond. Goodwood Park Hotel (Tower Block) was gazetted as a National Monument on 23 September 1989. Read more about it here. 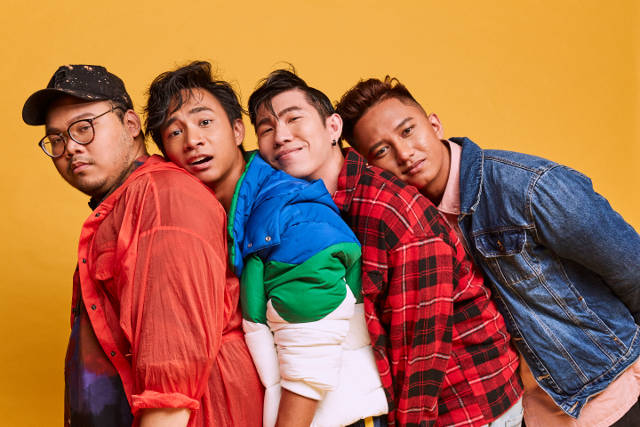