Note: The Ten Courts of Hell is dedicated to the teaching of ethics and morality. Due to the graphic nature of the photos, readers’ discretion / parental guidance is advised. 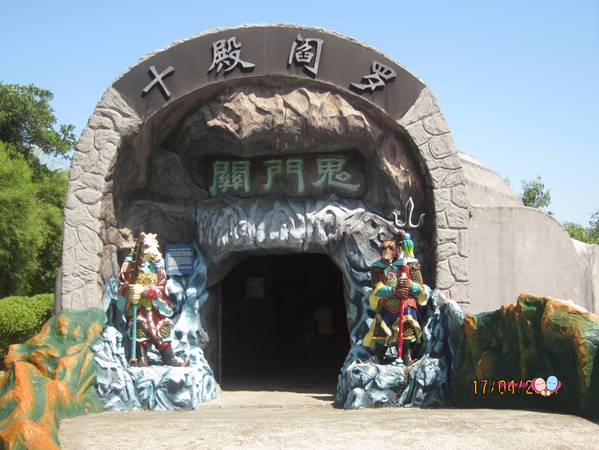 The origin of ‘Ten Courts of Hell’ is believed to be based on the Indian Buddhist legend of the ‘World of Sufferings’ where one would be punished in ‘Hell’ for sins committed in one’s present life.

The Buddhist concepts of ‘Hell’ and ‘Yama’ had spread to China during the late Tang Dynasty. Over the centuries, the Chinese had adopted and integrated these ideas into their own belief systems.

Each of the ‘Ten Courts’ is presided over by a ‘Yama’ taking charge of the various torture chambers to penalise evildoers. These ‘Yamas’ would decree the different methods and severity of punishments to be meted out based on one’s past deeds.

The idea of ‘One Reaps what One Sows’ and “Cause and Effect’ is the central tenet that serves to restrain anti-social behaviour and determine Chinese ethical and moral core values over the centuries.

According to a recent publication entitled “Popular Gods of China”. “Ox-Head” is hell soldier and “Horse-Face” is Lousha a wicked ghost who act as guardsmen at the gate of hell. When the spirits arrive, they would chase them into the gate of hell with a steel spear and ivory stick to face the various punishment given by the Yamas or Emperors of Hell.

This design of “Ox-Head” and “Horse-Face” to guard the gate of hell is based on legendary Chinese tradition beliefs.

First Court of Hell Yama: King Qinguang
In the First Court of Hell, King Qinguang conducts preliminary trials and each prisoner is judged according yo his deeds in his past life. The ‘good’ are distinguished from the ‘evil’ and the King recommends appropriate reward or punishment. Punishment is then carried out in the various Courts. 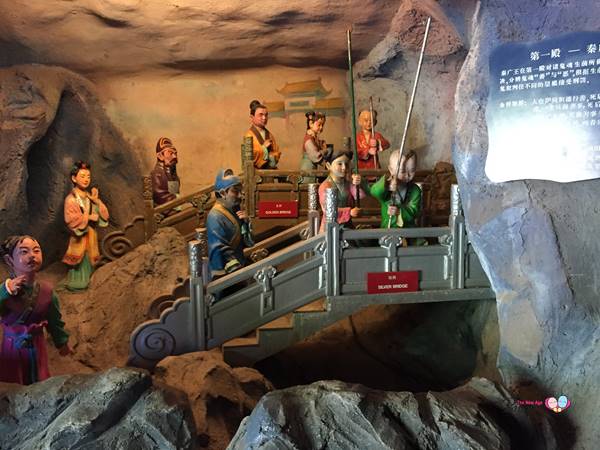 Those with virtuous conduct in their past lives will be led over the ‘Golden’ Bridge to reach paradise.

Those who past good deeds outweigh crimes committed will be sent to the ‘Silver Bridge’ to reach paradise.

Those who were evil doers in their past lives will be sent to repent before the ‘Mirror of Retribution’ and then taken to a subsequent Court of Hell to be punished. 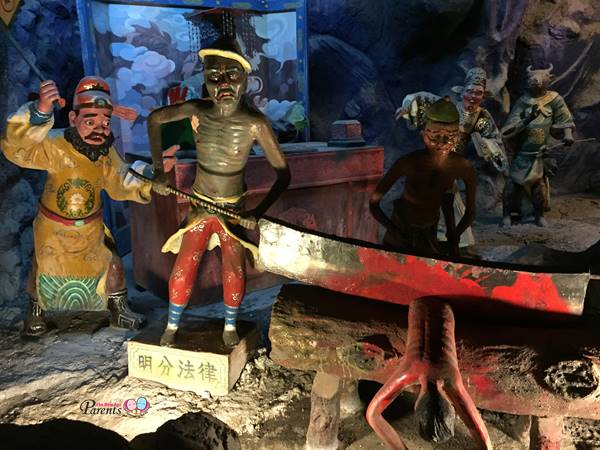 This accommodates those who were wronged and driven to their death. They would be asked to view how their enemies receive retribution. They would then be judged on their past deeds and given an appropriate punishment.

The “Viewing Home Tower” is for the evildoers to see how their relatives and family are suffering as a result of their wrong-doings. 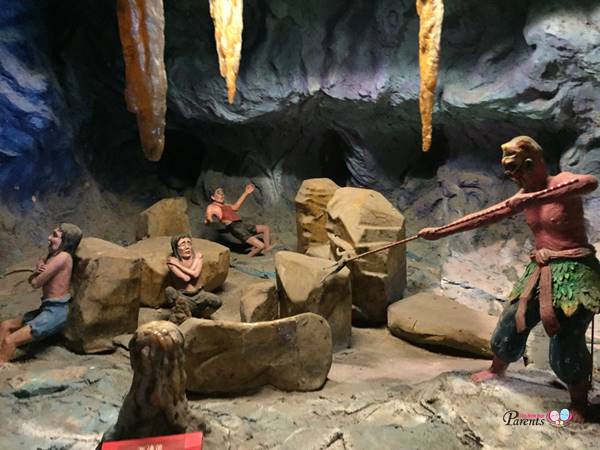 In the Tenth Court, there is the ‘Wheel of Reincarnation’ and the ‘Pavilion of Forgetfulness (“Men-Po” Pavilion).

After serving their sentences, prisoners arrive at the Tenth Court where King Zhuanlun passes the final judgement. The prisoners are then brought to the ‘Pavilion of Forgetfulness’ where an old lady ‘Men Po’ hands them a cup of magic tea which on drinking, makes them forget their past lives.

They will then go through the ‘Wheel of Reincarnation’. Depending on the prisoner’s past life, he would either be reborn as a human or an animal. Some would be reborn into a life of ease and comfort while others into sorrow and suffering.

Sinners who have been punished will be led to the Pavilion of forgetfulness where an old lady, Meng Po hands them a cup of magic tea which when drunk helps them forget their past lives.