My Baby Has Clubfoot

“Was it because your womb was too small, so your baby had no space to grow, causing his feet to be like this?” 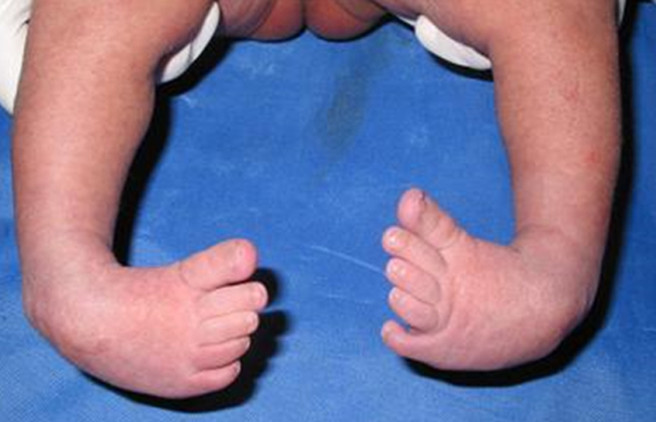 In Singapore, it is a common event for random aunties on the train or bus to come up to a new mum and peek into her pram or carrier for a glimpse at her baby within.

What follows is typically either fawning over the little one’s cuteness or comments about a plethora of baby-related topics.

But for some mums, there are a lot more opinions to deal with, when strangers notice their baby’s awkwardly arranged feet or cast and jump to all kinds of misguided conclusions.

“What happened to him? So young, and he already fractured his foot?” “During pregnancy, must be you didn’t listen to the doctor’s instructions, that’s why the baby became like this!”

These are tough comments to take, but nothing new for Jasmine (mum to Alex*) and Clydia (mum to Ben) whenever they are out with their babies – both babies were born with clubfoot.

Jasmine and Clydia discovered that their babies had clubbed feet during the detailed scan in the 20th week of their respective pregnancies.

For Jasmine, this was her first child, and she was naturally very upset and emotional when she first received the news, leading her to even seek out a second opinion. At the time, she knew almost nothing about what clubfoot was like. Over time, and with helpful information from her doctors and sources online, she was able to understand the condition better and accept the news.

As for Clydia, she was already a mum of three when baby Ben came along. During the scan at the clinic, she recognised what looked like a clubbed foot on the screen, and confirmed it with the staff. However, at that time, she had no idea what that would mean for her baby, and what treatment options would be possible.

“My gynae was very kind. She came to talk to us as soon as she heard the news of our baby’s condition. She shared that she has a nephew who was also born with a clubbed foot and that he is now a very active young man who frequents the gym, “Clydia shares.

“That helped to calm us down somewhat. I’m aware that there isn’t one specific scientific reason why it happens, aside from the chromosomal abnormalities that include clubbed feet, which isn’t the case for Ben,”

The positional type, which is caused by the position of the baby during pregnancy, is mainly the result of muscle imbalance or tightness in the womb. There is no bone or joint involvement. It can be easily corrected by stretching exercises after birth.

The structural type of clubfoot will require more long-term treatment, but can also be largely overcome. Here, the bone and joints of the foot are affected, such that the baby cannot put his foot through the regular range of motion.

Seeing their Baby For the First Time 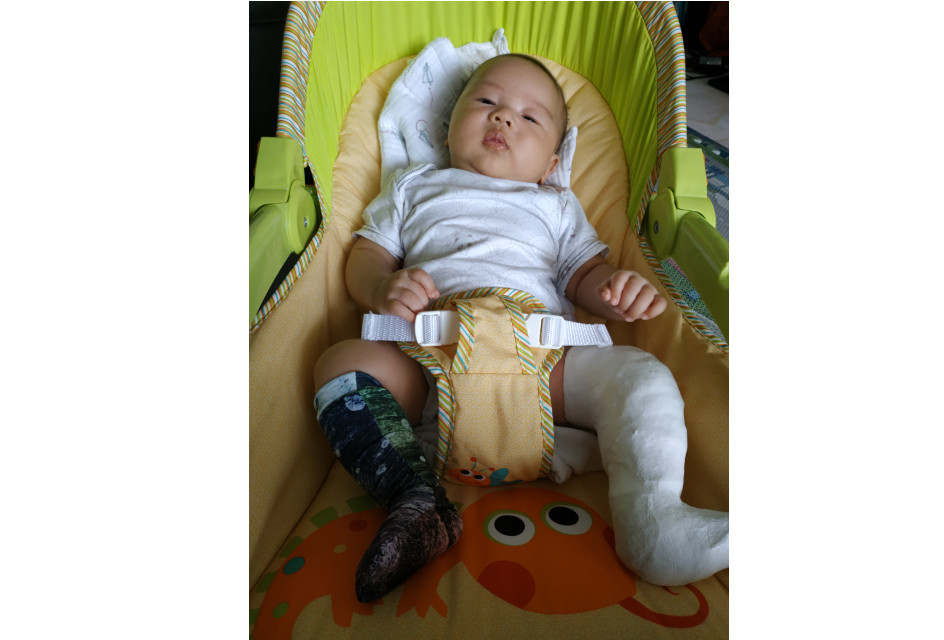 Seeing their babies for the first time was certainly an emotional experience for both mums. Jasmine shares, “I mentally prepared myself for the first look by seeing images on the internet, but I was still very worried and upset.”

Clydia had to undergo an emergency C-section, so she didn’t see her baby until she was back in the ward. At first sight, his clubbed foot looked pretty severe, but she was also very thankful that he had been born safely. “It was a mix of sadness and relief.”

For Clydia and her husband, they also had to let their older children know about their baby brother’s condition so that they wouldn’t be shocked when they met him for the first time.

“We explained it as simply as possible – that the bone had formed in a clubbed manner on one leg, and that there was no specific scientific reason for it. They were concerned that he would not be able to walk because of it, an issue we addressed.”

“We also prepared them for the required treatment, so that they would be fully aware of the entire process. The boys made efforts to dry their hands before carrying their brother (during the casting phase), and learnt how to carry and hold him while the boots were in place. They have also learnt how to insert and remove the bar for babywearing purposes and diaper changes, little ways that they can help me.”

For most babies with clubfoot, the treatment process will take a few years to complete, but the good news is that they are expected to make a full recovery and to achieve all the same physical developmental milestones as their peers.

The first phase of treatment is having the foot position corrected and cast as soon as possible after birth.

Subsequently, the baby will need to wear a special boots and bar system most of the time over the next few years, with the duration of time required wearing it decreasing over time. For a more detailed description of treatment, read Clubfoot in babies and children. 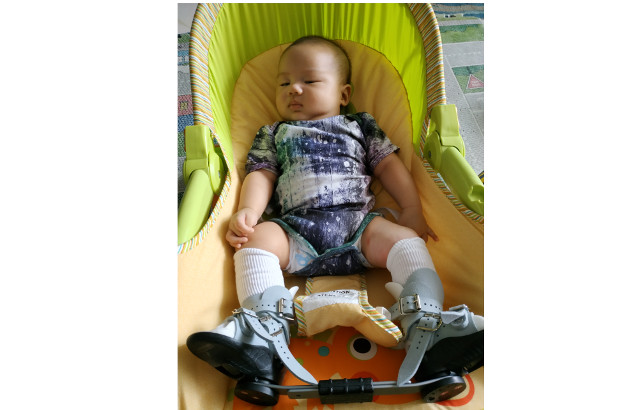 Clydia’s baby Ben, at about 8 weeks old, wearing the special boots and bar system for the first time. Photo courtesy of Clydia Mak

In more severe cases, surgery may be recommended by the doctor. Usually, the operation would be to lengthen the Achilles tendon near the baby’s heel using tissues from elsewhere in the foot or by transferring tendons from another part of the body.

This would loosen the tight ligaments so that the foot can be manipulated into a normal position. However such procedures can naturally be traumatic and overwhelming for both mother and baby.

Many families may face stress and discouragement throughout the corrective process. As such, they may consider joining one of the various support groups for parents, such as “SG Clubfoot Babies” which was started by parents of KKH patients.


Life with a Baby with Clubfoot

A few months since treatment began, both mums have adapted well to the necessary changes to lifestyle and learning how to care for their baby’s clubfoot.

“Most of the time, I would not let others see my boy in his condition. For the initial stage when he needed to wear the boots and bar for 23 hours a day, I hardly brought him out. Whenever I did, I would use long pants to cover his legs. Now that he can reduce the number of hours in the boots and bar (Alex is now 7 months old), I would try to remove it when we go out, to avoid questions,” Jasmine explains.

“I have received negative comments from people, even strangers in public, and I can only smile and ignore as it is not easy to explain.”

Clydia shares a similar experience of receiving judgmental stares from the general public and having harsh comments made to her.

During the casting phase when Benjamin had his leg set in a cast, Clydia had strangers come up to her, grab hold of her son’s cast and exclaimed in horror, demanding to know why his leg was broken or burnt at such a young age. 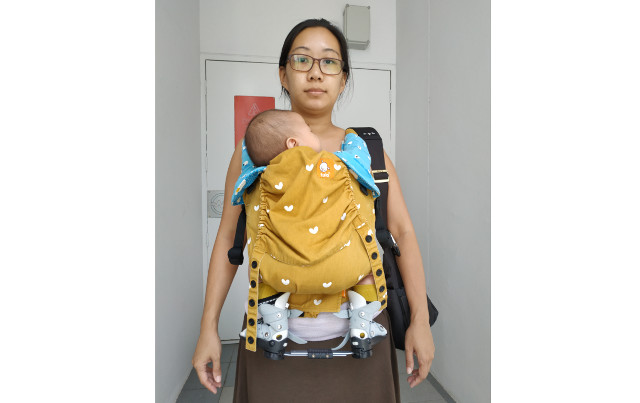 Clydia carrying her baby with the special boots and bar system. Photo courtesy of Clydia Mak

“I often froze when that happened, and my hand would fly to remove the hand from his cast immediately, as my fear would be that the stranger’s hands were wet or dirty, and the cast needed to be kept clean and dry. Depending on my energy levels that day, and the vibes I felt from the person, my answers varied from a brief “No, I did not break his leg” to a slightly more informative one about his clubbed foot,”

Family and close friends have been a huge support to her and the family during this season. Their understanding and encouragement, listening ears and prayers have helped her press on at times when she feels overwhelmed.

Besides the problems faced going out, it is also not easy to care for a baby with clubfoot for several other reasons.

During casting, the cast tends to get dirty very easily, for example when the baby is having his diapers changed. However, it is essential that it is kept as clean as possible all the time. As you can imagine this is extremely difficult because most babies have diaper accidents very frequently.

Having the boots and bar system for the majority of the time in the early months also present a huge challenge, as normal and regular activities like breastfeeding and baby-wearing become much harder and more tiring for the mum.

“Imagine keeping your legs apart in a certain angle to do everything in a day; the muscles get really weary.”

“I also have to be very mindful of travelling distances and time, since sitting down is uncomfortable for both him and me, while he is in the baby carrier with the bar on. And the hour that he gets a break from the bar is usually kept for his stretching exercises (to be done daily at home), and bath times.”

And as baby gets more active and learns to flip and roll, getting him to stay still long enough to wear the special shoes is yet another challenge faced, according to Jasmine. 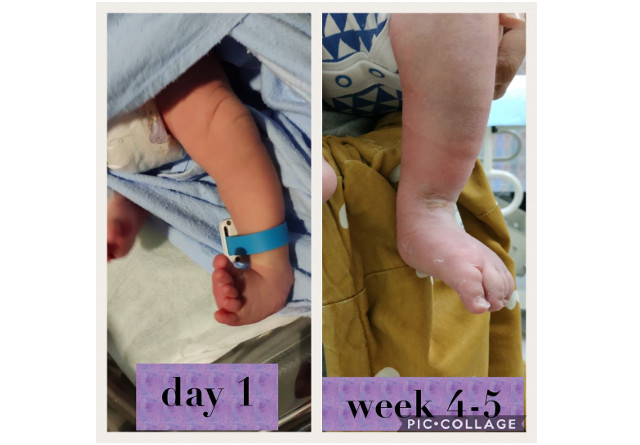 Ben’s foot when he was a newborn, and his progress during the casting stage. Photo courtesy of Clydia Mak

It’s still early months yet, but treatment is going according to expectations for both boys. However, that does not mean that there are no more concerns for the future.

Jasmine, for instance, wonders how she will respond when her child asks her one day why he needs to wear the boots and bars when other kids don’t need it and worry that he will not be able to participate in certain sports, like soccer, due to his condition.

Clydia also highlights the possibilities of a relapse, which happens in a small percentage of clubfoot cases. This is why she has undertaken the required daily physio-exercises for Ben with such fervency, as she hopes that this will prevent any future recurrence.

She also worries if his affected leg will be shorter than the non-affected one, and if he will walk with a significant limp as a result – a reality that many adults who were born with clubfoot do struggle with. However, her husband encouraged her that as long as baby Ben can walk and run well, that should not become a major concern.

Jasmine and Clydia want to let all mums of clubfoot babies know that they are indeed not alone in their experience. It is a long and challenging journey, but there are many others out there who are in the same boat. If you are expecting a baby who has been diagnosed with clubfoot, or have already given birth to a child with clubfoot, don’t give up on the treatment process.

*Name has been changed