The New Age Parents was invited to Kiddiwinkie Schoolhouse first International Cuisine Day, which is part of the school’s focus in developing a cosmopolitan child. As part of the school’s Countries and Cultures theme focus, children will get to enjoy the taste of different cultures during ‘International Cuisine Day’, happening once in two months. This is also part of their integrated curriculum approach where children are introduced to a particular theme through stories, crafts, skit and culinary art.

For this International Cuisine Day, the theme was France! 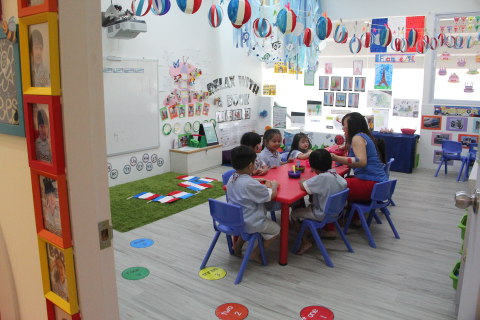 Teachers were decked in colours of red, white and blue, and children had French flags painted on their faces. Each classroom was decorated with red, white and blue streamers, drapes of cloths, accompanied by pictorial charts and information of all things French. Each class had their own food craft session on that day.

Hot Chocolate with Croissants
We made our first stop to the Nursery One classroom (2-3 years old). The kids and their teachers, Ms Tini and Ms Lucy, were in the process of preparing their chocolate concoction. Each child took turns to stir the cocoa mixture and had a chance to add in some marshmallows. Once the hot chocolate was ready and cooled, the children accompanied the warm aromatic drink with fluffy mini croissants. Some of them even dipped it in their warm cup of hot chocolate. Mmm… who can resist a cup of aromatic hot chocolate?

A French Spread
Next, we scooted over to the Busy Bee class, (3-4 years old). English teacher Ms Val added a few drops of food colouring into the cream cheese, to mimic the colours of the French flag. We could tell the children were super excited and as they got the plastic knives, they were busy spreading their coloured cream cheese on their rectangular bread, just like the flag. A very French bread indeed! 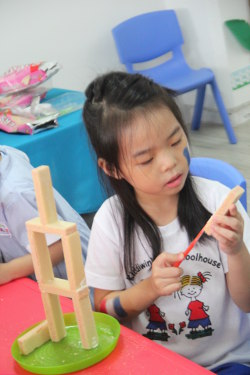 The Wafer Tower
Over at the Kindergarten 1 and 2 classrooms, the children were engaged in ‘building’ their own interpretation of the Eiffel tower using chocolate and strawberry wafer biscuits. The had cream cheese to cement and hold the biscuits together. Using their own creative ways and problem solving skills, each child created their own unique replica of the Eiffel Tower. “Look at my tower! It has an elevator and a construction.” one child exclaimed. Ms Chua, the class teacher constantly peppered the children with open ended questions to remind the children about their prior learning and discussion about the Eiffel Tower.

Le temps de manger! (‘time to eat in french)
However, the main highlight of the International Cuisine Day was the children’s lunch time. Lorimer, Kiddiwinkie Schoolhouse food consultant, who is also an alumni member of the Culinary Institute of America, prepared a special french menu for that day. The dining area was transformed into a restaurant setting, with napkins, table decor, with metal utensils and glasses, just like what one would see in a restaurant. 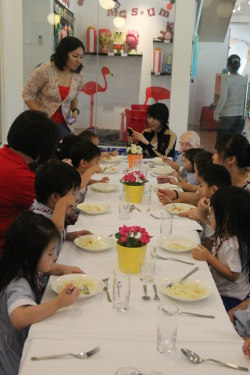 Before the food was severed, Lorimer gave the children a prep talk on some table étiquette and manners. He showed he children which utensils to use first, and reminded them to be careful as there were using breakable plates, bowls and glasses. And the moment the children have been waiting for… to have a taste of french food!

The kids had carrot soup for appetizers, grilled chicken poulet (with saffron rice), and freshly cut banana slices drizzled in chocolate for dessert. What an entrée!

As the french would say, délicieux!