When Love Takes You In: Darren and Melanie Soh’s Adoption Story

“When love takes you in, everything changes.
A miracle starts with the beat of a heart.”

Adopting a child is a huge commitment, and a topic that is still considered somewhat sensitive in Singapore today.

When is it a “good time” to adopt?

What do you tell the child about his birth parents, and when?

These are just some of questions that adoptive parents would have to grapple with as they welcome a stranger’s child into their home.

Every couple who adopts a child has a unique story to tell of their journey towards that momentous decision, and each will face different challenges along the way. Yet, every story is a powerful testimony to the power of love and the precious gift of life. 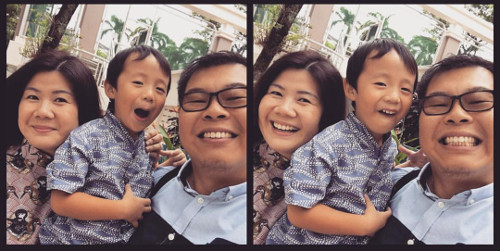 Darren and Melanie Soh adopted their son, Christian, after several years of trying unsuccessfully for a child. It was certainly not an easy decision to make, especially at the beginning, and they often found themselves on the receiving end of a whole barrage of intrusive questions and mistaken assumptions from some family members and friends.

The couple talked through their decision with a few family members who had themselves been adopted, and those conversations were key in helping them examine various perspectives and possibilities. They also spent time to volunteer with an orphanage in Cambodia, and the experience sealed their decision to adopt.

They began the adoption process in 2012, and met Christian for the first time that same year. “Actually, we were uncomfortable with the idea of ‘shopping’ for a child with an adoption agency,” Melanie shares candidly, “Even before we met Christian, we kind of knew we would probably end up adopting the first baby we met because… how do you choose?”

The first time Christian saw his parents-to-be, he smiled and yawned. Melanie says that this made her feel instinctively that she wanted to take care of him. Christian was three months old when the Sohs welcome him into their hearts and home.

Their close friends were involved with the adoption process. A few of them became their references when they applied for a home study report (passing this stage is necessary to qualify to adopt).

Others helped them by passing them pre-loved baby clothes, advised them on what to prepare, or accompanied them to buy things for the baby’s room.

Darren and Melanie also kept their parents updated throughout the process. They were initially rather anxious about many things and kept painting a lot of worst-case scenarios for them. The couple patiently addressed their queries and concerns, and brought them to see Christian at the foster nanny’s place, so that they could get to know him as well before he joined the family. Over time, they became increasingly supportive of the decision to adopt.

Melanie herself would go to visit Christian every day before they brought him home, to let him get used to her face and smell, so that changing homes wouldn’t be so traumatising for him. During these visits, the foster nanny shared with her many tips on caring for babies, including sleep training.

Some may wonder if adoptive parents struggle to love a child who is not biologically their own, but for Melanie and Darren, this has certainly not been the case.

“We unreservedly love him as our child. Yes, sometimes it’s a struggle to find the most loving and suitable approach to parent Christian, but that has nothing to do with him being adopted. Our love is limited because we are only human and make mistakes, and not so much because we are not his biological parents. He is an extremely sensitive yet strong-willed child. Disciplining him takes a lot of energy because we have to be logical, gentle and consistent – and we sometimes don’t get all three right,” shares Melanie.

Melanie especially enjoys their bedtime conversations, because those are the times when Christian often chooses to share his vulnerabilities and fears openly with them. Many of those chats have become precious and touching memories for her as a parent.

Besides the love and support of family and friends, Melanie is thankful also for a kindred spirit found in the friendship of a fellow adoptive mother, Serene*, who shares similar parenting philosophies as her. Serene’s child who is the same age as Christian, has a very similar personality as him, and often goes through similar emotional or developmental phases. Being able to process things with Serene has been very helpful and encouraging for Melanie.

Melanie also finds that reading books and articles by adult adoptees have helped her to better understand various adoption issues.

Two such reads that she recommends to anyone who is considering adoption are 20 Things Adoptive Parents Need to Succeed by Sherrie Eldridge and Creating Loving Attachments by Kim S.Goulding and Daniel A. Hughes

“Such reads frame adoption from the adoptee’s perspective, which I feel is only fair, since adoption really affects the children the most,” she says.

In fact, Melanie herself is an author, and has penned several publications, including the popular children’s series The Adventures of Squirky the Alien, a children’s picture book series written for Christian.

This story is her way of letting him know that, should there come a day when he wants to find out more about his origins and birth parents, his parents will support his search.

“I hope that Squirky’s story will provide opportunities for adoptive parents to talk about adoption more openly with their young children. Unfortunately, in Asia, adoption is still a relatively taboo and misunderstood subject, and there are many negative connotations to what is essentially a beautiful coming together of families.”

*Name has been changed

By Dorothea Chow. Photos courtesy of Darren and Melanie

This was first published in The New Age Parents e-guide.