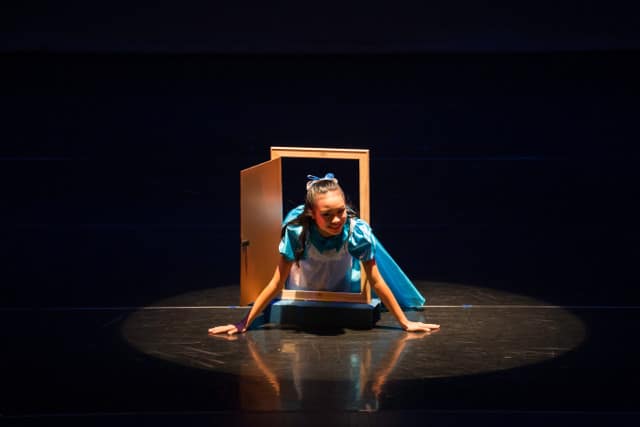 On a warm summer day, Alice sits in the garden by the lake with her sister.

Suddenly, she spots a white rabbit with many little rabbits. The White Rabbit pulls out a pocket watch, exclaims that she is late and jumps into a rabbit hole in a large tree.

Alice follows the white rabbit down the hole…

On 14 August 2016, the National University of Singapore Cultural Centre Theatre was packed with audience young and old. Last year, Crestar School of Dance (CSD) presented the classic fairytale, The Diary of Sleeping Beauty. This year, they took on Lewis Carroll’s beloved childhood story Alice in Wonderland, with Ms Ivy Chua as the Concert Artistic Director. 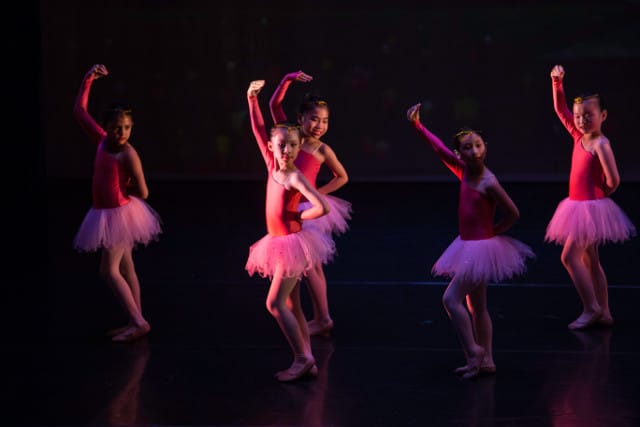 After 3 months of rehearsals, students from as young as 3 and a half years old to young adults took the stage. A burst of colour and fusion of ballet, jazz and modern dance, the concert not only served to hone students’ dance techniques and confidence, CSD version of Alice also allowed students to experiment with acting and miming; questioning and reflecting what is the best way to breathe life in the quirky characters we all know. 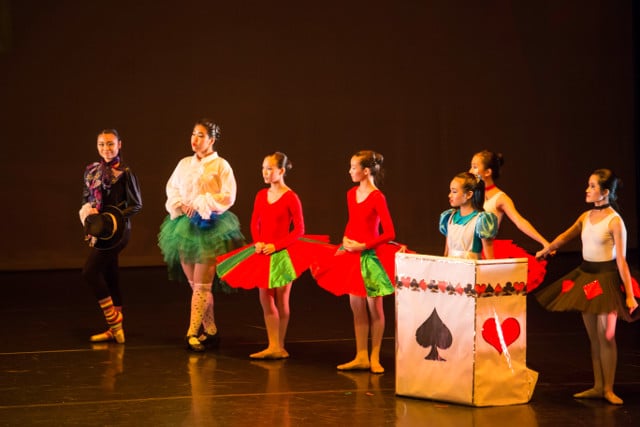 As Alice falls into the rabbit hole, we meet an array of unique characters. From the highly-strung and narcissistic Queen of hearts, to the quick-footed Mad Hatter, to the flamboyant Duchess and jittery poker cards.

Stephanie Tsang, (age 13, from Marine Parade), played Alice with a girly innocence and curiosity, bringing joy in her bouncy Sautés (jumps) and Petit jeté (little leaps). Tap choreography was used to reflect the eccentric nature of the Mad Hatter. This was deftly executed by Evangelyn Wong (age 18), an alumni of Crestar School of Dance who danced at (CSD outlet – Hougang, how many years she was there – since Feb 2009 to Jul 2013).

She brought the Hatter to life in her energetic and fluent tap shuffles, rhythmic stamps and nimble hops. Ether Kum (age 25, from Tampines Central), another Alumni of the school, played The Duchess to a tee in her exaggerated sashays, flashy hand sways and turns. 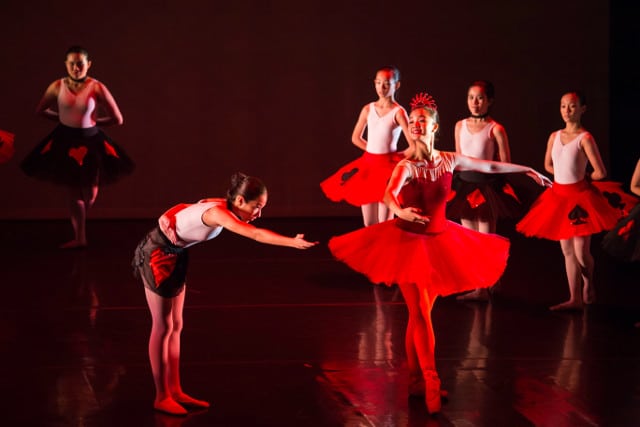 Isabelle Neo (picture above, age 19, from Marine Parade) commanded the stage as the self-absorbed and evil Red Queen. In one act, what was meant to be a showcase of the Queen’s poise and grace with her poker card escorts turns into a comedic disaster. Isabelle wowed the audience with her consecutive series of Arabesques on pointe poses, yet at the same time she managed to ‘stumble’ and ‘fall’ with humour as her escorts ‘fumbles’ to support her while she poses. Kudos also goes to the dancers who played the Queen’s entourage of anxious and edgy poker cards so convincingly. 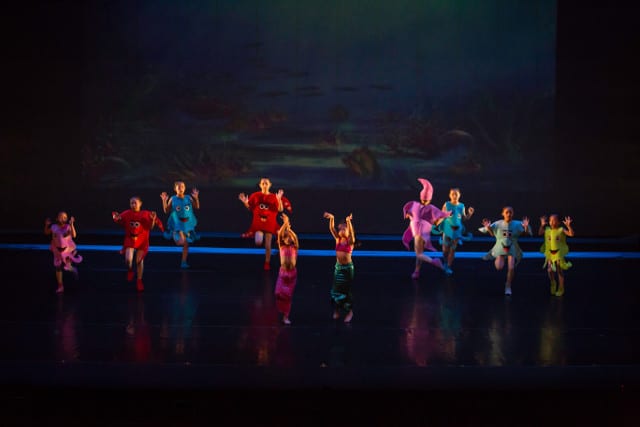 In “Red Roses”, Li’s fast-paced formations mirrored the process of flower buds blossoming into full blooms and later wilting as the petals fall away. This marks the first-ever collaboration between Crestar local and overseas dance schools. The youngest dancers from the school’s Bebe ballet class had their spotlight on stage too. Whether it was skipping on pointed toes as white bunnies, or strutting with outstretched arms as graceful pink flamingos, it was a charm to catch these toddlers and preschoolers making their debut on stage. 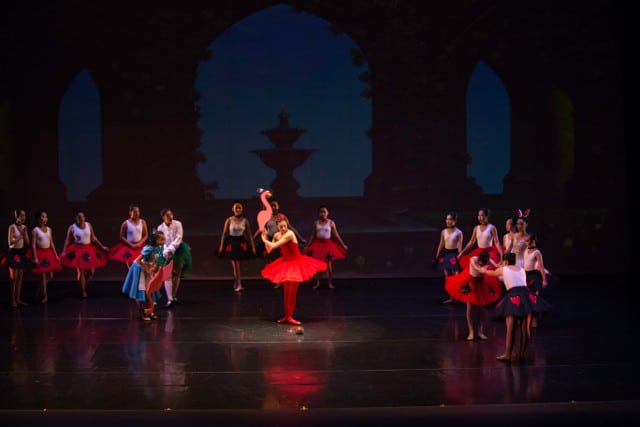 The concert ended with a rousing finale routine to the upbeat tune of Shakira’s pop song “Try Everything”. It was evident that the teachers at the school are well-loved by the students judging from the loud applause and cheers made as Ms Ivy Chua and the rest of the participating teachers came onstage for their curtain call.

What stands out from this year’s concert was the variety of dance forms and theatrical presentation of Alice, where students – under the watchful guidance of their teachers – were given a stage to shine and stretch their potential as dancers.

We can hardly wait to see their next concert in November. 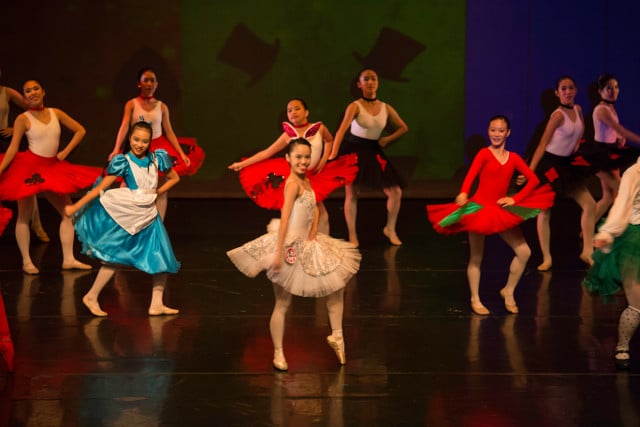 About Crestar School of Dance

The school has come a long way since 1977. Started from humble beginnings, as a dance department under Yamaha Music School Singapore with just 250 students, the school has grown steadily through the years and now boosts 25 dance studios. In October 2014, they launched their first Crestar Dance Arts Centre in Beijing, China.

Trial Classes are available. For more info, go to www.crestarballet.com.sg 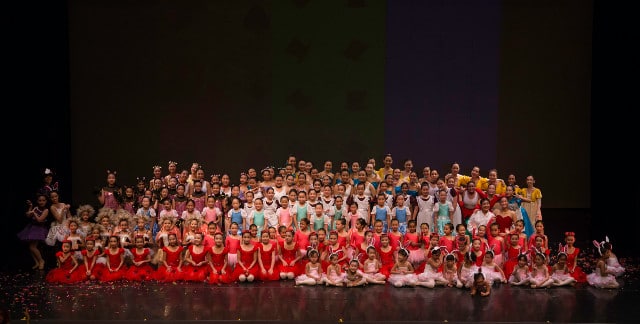