More than 70 percent of Singaporean teenagers aged 10 to 14 rarely or never read, watch or listen to the news and one in three of them are not curious about world events. Yet, their parents think otherwise, with 63 percent of them reporting that their children tune in to the news every one or two days.

These are key findings from a survey of 300 upper primary and lower secondary students and 300 parents, conducted by four Nanyang Technological University (NTU) students as part of a news literacy campaign, Join The Current. Respondents were asked about their perceptions of their own news consumption habits, the importance of knowledge in current affairs, and their sources of news information.

Among the reasons teens cited for not keeping up with the news, a lack of interest was the most common at 80 percent. Of all the sources teens turned to for news information, the most commonly cited was “family”, highlighting the importance that parents play in encouraging their children to develop a news reading habit.

While 75 percent of parents are interested in incorporating news into their children’s out-of-classroom education, over half of them have not tried to do so. Most said they did not know how to or had no time.


Based on these insights, the team of four communication studies undergraduates pioneered Join The Current, a news literacy campaign aimed at engaging teens aged 10 to 14 to take an interest in current affairs and identify as a global citizen. Their campaign also focuses on information literacy to help teens navigate complexities of new media.

The four 22-year-old undergraduates are Ms Miranda Yeo, Ms Lynette Teo, Ms Natalie Huam and Ms Fiona Tan. This campaign is part of their final year project at NTU’s Wee Kim Wee School of Communication and Information, and is the first campaign of its kind to champion current affairs for teens.

Director of education centre School of Thought, Mr Tong Yee, said in an interview with Join The Current that it is important for our children to have conversations about current affairs because these conversations develop their identity and give them perspective.

“The more our children read, respond, and wrangle with complex issues, the more compelled they are to listen in to their own voice. The voice is a very powerful commodity. Current affairs give children more understanding of why things happen the way they do, why they respond the way they do, and what they need to do to solve these problems.”

The team has partnered with the National Library Board (NLB) to launch four literacy workshops to be held in various libraries in January and February. The workshops will introduce serious topics such as climate change and unemployment through a movie screening, games and quizzes. While the workshops are open to the public, community beneficiaries from Chinese Development Assistance Council, Jamiyah Children’s Home and Students Care Service will be present as well.


Ms Verena Lee, Head of Content & Services for Children and Teens, NLB said: “Supporting our younger generation in building essential literacy skills has always been one of NLB’s goals. We are pleased to partner Join The Current in their mission to reach out to teens and inspire them to think critically about the world around them.”

Together with Worldly Wise, an education centre that teaches current affairs to children, the team has produced a handbook, “The Current Compendium”, designed to introduce current affairs in a fun and palatable manner with heavy use of graphics and colourful design.

The handbook was distributed to over 500 students as part of a goodie bag at school booth outreaches and three Edusave Merit Bursary Award ceremonies held in January. 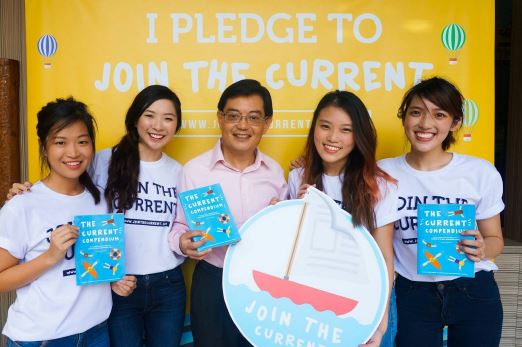 Minister for Finance and former Minister for Education Mr. Heng Swee Keat, who was there at the award ceremonies as guest-of-honour, expressed his support for Join The Current in one of his speeches to the award recipients. He encouraged the students to learn, read more and find out more about their world, which he said is changing much faster for our children as compared to their parent’s generation.

In a separate interview with Join The Current, Mr Heng also provided some tips for parents keen on engaging their children in current affairs. “First and foremost, I think our parents and educators can be role models. If we ourselves read a lot, children will look at us and they will also then take an interest. And of course, when educators and parents are better informed, they are able to discuss these subjects to a greater detail to the students,” he said.

Said team member Lynette Teo: “We live in an age of information overload and it is now more crucial than ever that as our future leaders, our children stay curious about the dynamic world they live in. We want to inspire our younger peers to understand and take a stand on the issues that shape their world so that they can change it for the better.”

More information on the campaign can be found here. The Facebook page keeps followers up-to-date with Join The Current’s community engagement activities. 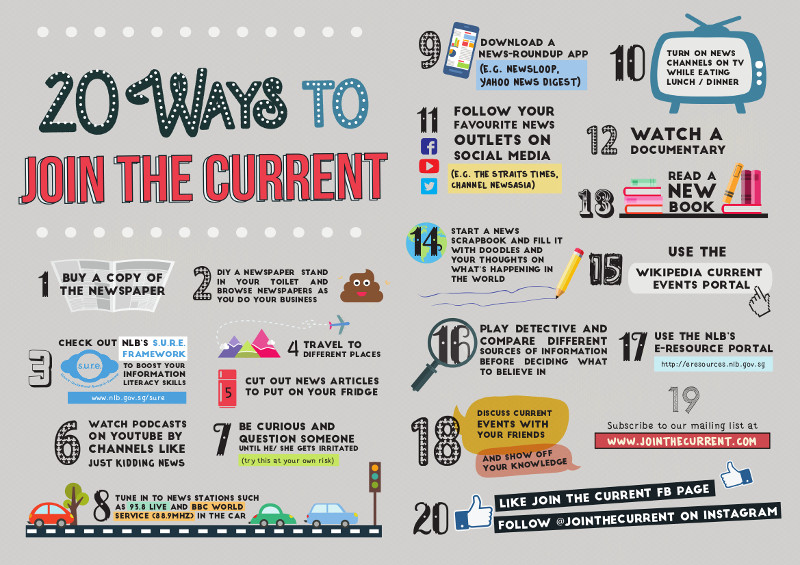