Singapore Budget 2013: How Will It Affect Single Parents 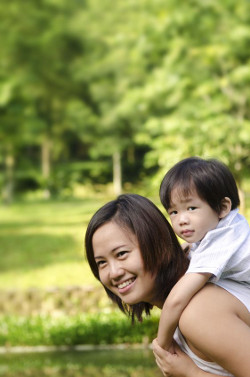 In Singapore we hear of families with young children and newlyweds facing with challenges with cost of living, maintenance and medical bills of their children, yet we hear little of how the single parents struggle among us. If it is already challenging for the mentioned families, what about the amount of stress a single parent would have to go through?

At a young age at 21 years old, Ms Laura found out that she was pregnant with her daughter, Natalia, approximately 3 years ago. She shares that the biggest challenge that any single parent would face would be sheer exhaustion in raising their child. “Without a partner to offer some occasional respite, being a single parent to young child allows little to no “me time”. In fact, having just a couple of hours of downtime to unwind is so far and few between that it has truly become a luxury” shares Laura.

With challenges such as societal stigma, coupled with the government’s emphasis on having nuclear families and the lack of access to subsidies and financial incentives (e.g. Baby Bonus, Working Mothers Tax Relief, Foreign Maid Levy Relief, Grandparent Caregiver Relief) for unwed single parents, life can be a mountainous task for these single parents.

Laura shared that it has been a challenging journey but she has been blessed with a wonderful family and friends who rallied around her to provide her support and help she needed during those days. Research has shown that young mothers around the world almost unanimously identify family as the most helpful source of support, beyond any community-based services or government aid. So should a child be denied these benefits simply by virtue of his/her mother’s marital status?

Perhaps one reason why single mothers are not granted the same incentive schemes as dual parents is how it may inadvertently encourage Singaporeans to choose single parenthood over nuclear households. However, Laura shares she wouldn’t think that an incentive scheme offering up to $10,000 would actually cause a woman to choose to be a single parent, considering it costs an estimated a million dollars to raise a child until adulthood in Singapore. Secondly, Singapore hails itself as being an inclusive and child-centric society. Schemes such as the Baby Bonus and dollar-for-dollar government matching Child Development Account are meant to benefit all Singaporean children.

Someone once told her, “There is no such thing as accidental children; only accidental parents”. Barring the question of whether a parent should even be penalized for not being married, should a child be punished for being borne to a single parent – something that was never by his/her choice? Because denying a single mother these perks and benefits may inherently cause her child to suffer as well. “Are we, therefore, insinuating that a child of a single parent is less worthy a Singapore citizen than a child from a dual-parent household?” Laura questions. She believes single parents should be granted the same perks as their married counterparts; not from the angle of encouraging single parenthood but from the angle of ensuring every Singaporean child is entitled to equal, adequate and necessary support.

In the recent New Budget updates, unwed single parents will now be able to apply for unconditional childcare leave unlike in the past. This inclusion is indeed a big step towards lending more support to the vulnerable single parents in Singapore. However, can the government do more for our single mothers, such as providing them with more aids, subsidies and schemes so that their children can also be equally cared for?

Laura finds that removing the clause of having to produce marriage certificate in order to be eligible for parent-related reliefs, subsidies, schemes etc. may help in her application in getting these reliefs for her daughter. In fact, this may actually reduce the abortion rates in Singapore as it would give more hope and encourage unwed or single mothers to know that it is still possible to raise their child in the life ahead, such as fostering, adoption or even raising this child with help from their families and the government.

Regardless of how much support the government will provide to single parents in the near future, it would still take time for implementation and change to happen. Laura looks at the future with hope and encourages the single mothers in Singapore to hang in there as they are not alone in this journey. Here are a few of her words of encouragement to all the single parents out there:

Some resources for single mothers