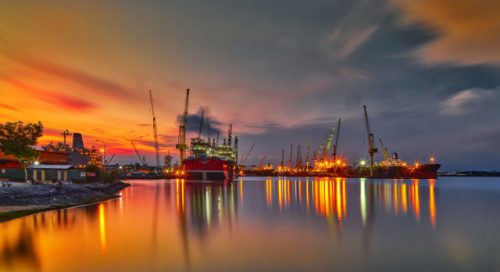 A view of the Straits of Johor from Sembawang Park, 2021. Courtesy of National Heritage Board

Did you know that Sembawang used to be home to an important naval base for the British Empire? Or that it was once populated by rubber plantations owned by prominent pioneers such as Lim Chong Pang? Sembawang, which derived its name from the Mesua ferruginea or the Sembawang tree, has also been home to people from all walks of life – from seafaring villagers who dwelt in kampongs; Asian dockyard workers from Kerala and Hongkong who lived at quarters along Canberra Road; to British naval officers who stayed in black-and-white houses – adding to the area’s rich history and cultural diversity. 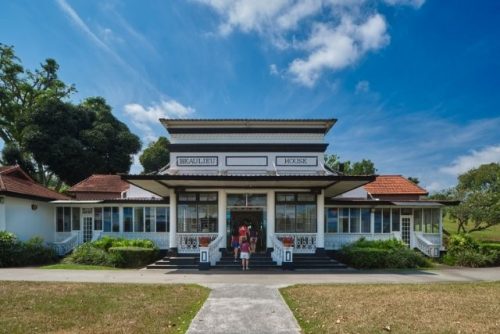 These lesser-known stories of Sembawang’s naval history and diverse communities will be showcased in the National Heritage Board’s (NHB) new Sembawang Heritage Trail. The trail features 31 trail sites and nine heritage trail markers, which invite trail-goers to explore Singapore’s northern coastal town from when it was first mentioned in maps in the early-1800s, to the decades before and after World War II.

Discover vignettes of a former naval base

Formerly a major rubber growing area in the early 20th century, Sembawang was later developed into an important naval facility for Britain’s Far East Fleet during the pre- and post-World War II decades. Many landmarks of the former naval base still exist today and they include the stately black-and-white houses that line Admiralty Road East; the elegant Beaulieu House at Sembawang Park; and the grand Former Admiralty House at Bukit Canberra, which is a National Monument. Sembawang has also retained its maritime heritage in the form of Sembawang Shipyard, known today as Sembcorp Marine Admiralty Yard, which took over the naval base’s dockyard from 1968. For more information about sites that showcase Sembawang’s naval heritage, please refer below: 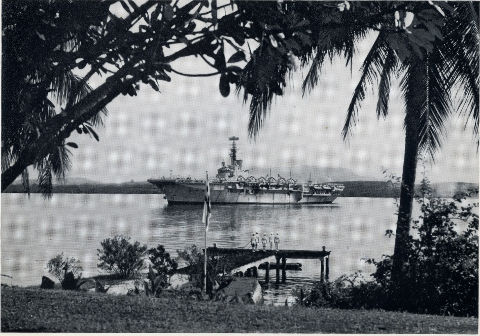 Beaulieu House was built in the 1910s by businessman Joseph Brooke David when it was first used as a holiday retreat. It was later taken over by the British navy and served as a home to several military officials, before becoming the residence of the Chief-of-Staff of the Far East Fleet in the 1960s. During this time, the Chief-of-Staff and his team would greet warships heading for the naval base with a salute from a jetty in front of the house. 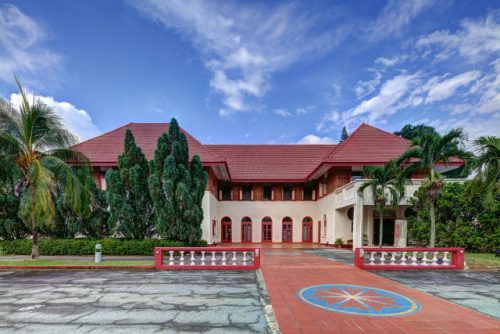 Gazetted as a National Monument in 2002, the Former Admiralty House constructed between 1939 and 1940 by the British Royal Navy. It was built to house the most senior officer at the former Sembawang Naval Base, and was originally known as Navy House or Canberra House (after the nearby Canberra Road). After the war, the building served as the residence of the Flag Officer, Malaya; the Commander-in-Chief of Britain’s Far East Fleet; and the commander of ANZUK forces (a tripartite force of Australia, New Zealand and United Kingdom troops) in Singapore, before being transferred to the Singapore government in 1974. In 2019, the building was renamed Canberra House and will be part of an integrated community hub for Sembawang called Bukit Canberra.

In 1967, Britain announced that it would withdraw its military forces from Singapore by the mid-1970s. As part of this process, the naval base’s dockyard was transferred to the Singapore government in 1968. The government established a new company, Sembawang Shipyard, to operate the dockyard as a commercial enterprise.

Sembawang Shipyard was renamed Sembcorp Marine Admiralty Yard in 2015. Currently, the shipyard has five dry docks in Sembawang but is expected to move to Tuas in the mid-2020s.

The Sembawang Heritage Trail incorporates contributions from 29 past and present Sembawang residents in the form of memories, stories and photographs, along with four contributions from three Facebook open calls for memories which reached out to over 300,000 users and attracted more than 300 comments. These accounts from the community transport trail-goers back to the past and invite them to imagine the area as a bustling naval base, with rows of bars and shops frequented by visiting sailors, and quaint coastal kampongs.

The trail also tells the stories of the many communities who settled in the area through the decades, including its earliest known inhabitants – the Orang Seletar; planters and boatmen who grew gambier and ferried passengers and goods; villagers of coastal kampongs like Kampong Tanjong Irau, Kampong Tengah and Kampong Wak Hassan; as well as the British naval officers and dockyard workers from Singapore, Malaya, India and Hong Kong.

These early residents established schools, associations and religious institutions such as the Holy Tree Sri Balasubramaniar Temple, the former Masjid Naval Base (now replaced by Masjid Assyafaah) and Masjid Petempatan Melayu Sembawang that continue to serve the members of their communities today. For examples of former kampongs and long-established community institutions in Sembawang, please refer below: 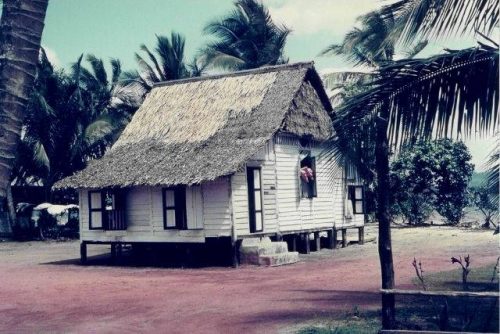 A seaside kampong house near the 15th milestone of Sembawang Road, 1960s Courtesy of Tony Dyer and Sofea Abdul Rahman

Holy Tree Sri Balasubramaniar Temple traces its origins to 1962, when P. Karuppiah, a dockyard worker, dreamt of Lord Murugan and a golden cobra under an elantha (jujube) tree. He then found the tree of his dream near Canberra Road and set up an altar beneath it. Hindu dockyard workers began to pray at the altar and later built a wooden shed to house the shrine. In 1964, the shrine was registered as Punithamaram Sree Balasubramaniar Temple. Devotees later raised funds to build a proper temple, which was consecrated in 1971.

The Masjid Naval Base at the former Delhi Road opened in 1968, the result of efforts by Muslims in the base’s police force. This was demolished in the 2000s after the completion of Masjid Assyafaah, which was built to accommodate the growing Muslim community in Sembawang. Designed by Tan Kok Hiang of Forum Architects, Masjid Assyafaah stands out as a mosque that integrates Islamic symbols with contemporary architecture. Instead of a traditional minaret, the mosque has a 33-metre high steel tower bearing a star and crescent moon. Inside, the prayer rooms are naturally lit by skylights on the roof and framed by screens with rich arabesque patterns (an Islamic art form). 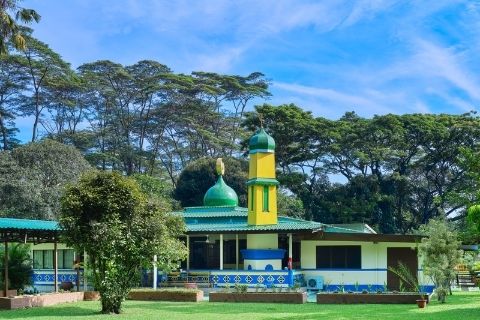 Opened in 1963, Masjid Petempatan Melayu Sembawang was built by the residents of Kampong Tengah and is the only surviving landmark of the former village today. The mosque also served the Muslim community in the nearby villages of Kampong Wak Hassan and Kampong Tanjong Irau.

To explore the multi-faceted history of Sembawang, trail-goers can embark on three thematic, bite-sized routes according to their interests and in their own time. These routes are:

Mr Alvin Tan, Deputy Chief Executive (Policy & Community), NHB, said: “We hope that the new Sembawang Heritage Trail will serve as a springboard for Singaporeans to enjoy this coastal town’s rich naval history, and its surviving landmarks such as the Sembawang Hot Spring, the Sembawang Strip, the Masjid Petempatan Melayu Sembawang etc.. We also hope that during this period of travel restrictions, more Singaporeans will venture out and rediscover different parts of Singapore through all of NHB’s heritage trails.”

The Sembawang Heritage Trail’s companion guide and map (the map is available in four languages) can be downloaded from NHB’s heritage portal here. Printed copies of the guide will also be available for a limited period at Sembawang Community Club, Sembawang Town Council and Canberra Community Club.

The Sembawang Heritage Trail features three thematic trail routes of varying distances, which the public can embark on at their own time.

1. Historical landmarks of Sembawang (2 hours on foot and with public transport)

Sembawang houses many historical landmarks established by the British and local communities and is home to the only natural hot spring park in Singapore. This trail introduces you to these sites that tell of major milestones in Sembawang’s past.

2. Communities of Sembawang (3 hours on foot and with public transport) 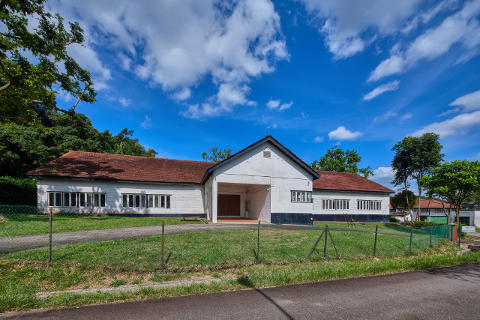 A building at Gibraltar Crescent known as the Japanese Theatre or Dockyard Theatre, which was used to host drama performances after World War II, 2021. Courtesy of National Heritage Board

Since the 19th century, Sembawang has been home to many communities, from coastal villages to British families based at the former naval base. This trail brings you through these former neighbourhoods and highlights buildings that were once part of these northern communities. Stops include:

3. From Dockyard to Shipyard (2 hours 30 mins on foot and with public transport) 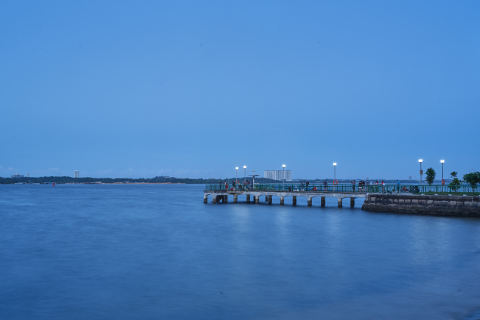 Sembawang Naval Base, which opened in 1938 and closed in 1971, occupied much of Sembawang’s northern coast. The base included HM Dockyard, Singapore, a ship repair facility that was transferred to the Singapore government in 1968, when it became known as Sembawang Shipyard. This trail takes you to various landmarks that were part of the former naval base.

Heritage sites featured inside trail markers are in BOLD (note that multiple sites can be featured within the same marker as some of these sites are located in close proximity).