There is no ‘one typical day’ for this father of three.

We’re seated at the reception area at Heguru Education Centre in OneKM Mall, speaking to Brandon Wong (黄炯耀), who is waiting for his children to finish the class.

It’s Saturday morning and the centre is bustling with activity. Some parents look our way and thoughtfully quiet their children.

If you find him familiar, that’s because you’ve probably seen him on your TV screen. An actor since joining Star Search in 1995, Brandon grew up in Jelebu, a small Kampung in Negeri Sembilan, Malaysia, helping his father with his livelihood at a young age.

Every morning at 4.30am, they would travel 34km to get newspapers from the supplier and travel back to their hometown to distribute the papers. His job was to bundle supplementary materials with the papers.

Brandon reveals he was in K2 – just six years old – when he started his ‘part-time work’. After delivering the papers, he would change to his school uniform and head off to school.

After school, he would return to help man his father’s store, and this went on until his tertiary education. Brandon not only juggled his studies with his ‘part-time’ work, he also excelled in sports and represented the state’s basketball team.

An all-rounder student, he did well in school and graduated from the Universiti Teknologi Malaysia.

Kampung life he says, has trained him to be independent; a trait which he worries his three sons might not have, as life now is very comfortable.

Both him and his wife take turns to do the house chores and care for the kids – all without a domestic helper. Brandon doesn’t mind doing the ‘dirty job’.

“If I’m not working, I will become the 24-hour maid,” the 47-year-old lets out with a laugh. He receives little support from his parents as they are in Malaysia, and his in-laws do not live nearby.

As an actor, filming schedule can be hectic. At his busiest, he can be working from 7am in the morning till midnight. On occasions when he does not have late shoots, he reads to his three boys before bedtime. Family bonding times are spent outdoors, either in the park or the playground.

On Hindsight: How his parenting style has changed

In acting, one has to be fluid and versatile in taking on a certain character. Similarly, parenting requires constant learning, reflecting, tweaking and changing according to each situation; catering to each child’s personality.

Brandon’s first child Yu Jie, is more shy and apprehensive. “He is very obedient and listens, but tends to be scared to try new things. It also takes him a while to warm up to new people.” He reflects on how he raised Yu Jie and realises Yu Jie’s current ‘play-it-safe’ personality may be the result of over-protectiveness.

“Because he was my first child, I poured all my love on him. That might have caused him to become dependent on me,” he adds. The father has since learnt to let go his reigns. He encourages Yu Jie to do more and take up new things to build his independence.

For his second child Yu Xin, freedom was easily granted. The actor feels he loosened his string a little too much. While Yu Xin is more daring and likes to try new things, he is not as “disciplined”. His second child will not give in or listen to firm remarks or instructions, but responds to a gentler form of communication.

I pick up a tinge of regret as Brandon talks about his second-born.

Being a middle child in his own family, he understands what it’s like growing up a middle child and worries that Yu Xin might feel neglected. “I feel like I have not given enough of my attention and love to Yu Xin. But before I could shower more attention, my third child was born.”

The solution? Spend one-to-one time with Yu Xin, without his siblings around.

He recounts an experience when he spent quality time with Yu Xin alone and discovered a huge difference in his behaviour. “I kept praising him that day because he was really well-behaved.”

He makes it a point to spend personal time with Yu Xin once a week, depending on his schedule and urges parents to do the same.

“It strengthens your bond with your child, and you really get to understand them better.” 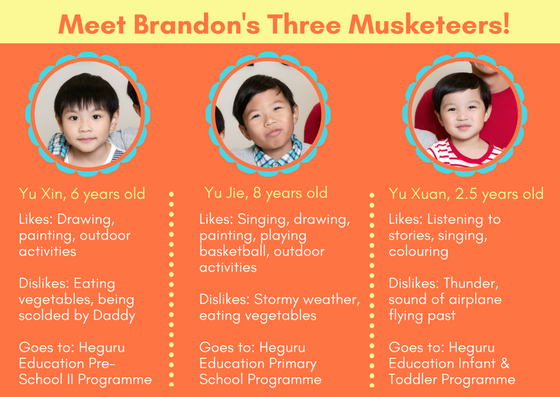 The busy dad hopes to instill in his children that academics is not everything. “You might not be a high flyer in your grades, but you can still be successful,” he says firmly.

He hopes all three of them can be all-rounders, not just be bookworms. Instead of going to academic enrichment classes, he wants them to enjoy trying various things, and acquire a broader and deeper understanding of the world.

Brandon was unaware of the importance of exposing his children to various experiences when they were young. It was only after receiving an invitation from his friend and founder of Heguru Education Mr Kuah Eng Liang (pictured below on the left), that he reflected on this and decided to give Heguru a try. 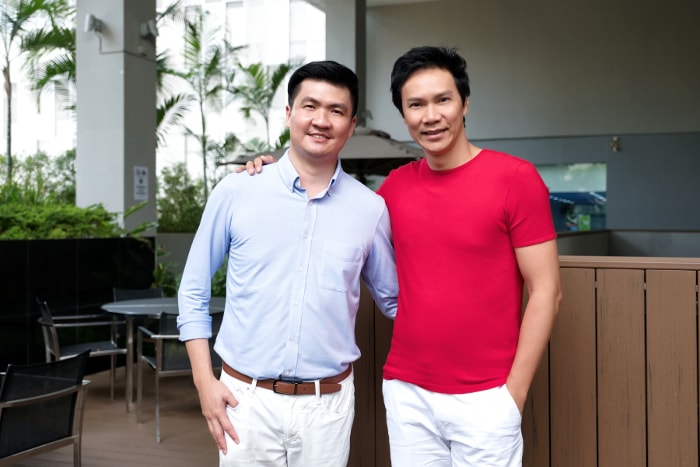 Despite his first and second child not having any prior exposure to right brain training, Brandon noticed how both of them, including his youngest boy, have changed for the better, since they joined the programme more than a year ago.

For starters, his second child Yu Xin, loves doing the Heguru Preschool II course activities at home. Sometimes, father and son would solve the intellectual puzzles and math diagrams together at home.

“But when it comes to his preschool’s homework and learning of Spelling and 听写 ting xie (Mandarin Spelling), we have to ‘force’ Yu Xin to do,” Brandon says with a chuckle. Spelling or 听写 ting xie is not part of Heguru’s programme.

For first-born Yu Jie, the Heguru Primary course helps him to be more confident in his ability.

“At the beginning, Yu Jie will tell me he can’t solve certain problems because it’s too difficult. I will tell him this, “天下无难事，只怕有心人” – there is no impossible feat in this world, if you mind is set on it.” Now, his son is slowly learning to tackle the challenging IQ question which goes beyond the primary school curriculum.

For youngest son Yu Xuan, the change was the most obvious.

Brandon explains, “Before joining Heguru Education, he was very shy. Besides me and my wife, no one could carry him. After a year, he is now able to express himself and speak to peers his age. He is more daring and willing to try new things on his own.”

On Hindsight: How fatherhood changed him

Being a father has shaped him to become a better actor.

“More life experiences make a better actor,” says the veteran actor. “Today, when I need to play a role of a father, the kind of love and emotion to show on screen comes more naturally, because I know what it feels like.”

Fatherhood has also enabled Brandon to pick up new skills along the way. He now gets things done faster and is more efficient.

Second, he discovered he had a special flair with children. When child actors throw a tantrum or are unhappy, he’s able to coax them out of it and ‘act’ according to the scene.

At this moment, Yu Jie pops out and shows his father the stack of stickers he earned from class, signaling the end of our interview.

I ask him for words of advice he can share with other working fathers.

“Different kids have different personality. Each has to be tackled in a different way. There is no one system that fits all,” Brandon states.

Like most working parents, trying to find time for kids requires compromise. For Brandon, it was having to compromise on his sleep and basketball, an activity he has enjoyed since school days.

“Though it is very tiring, I enjoy doing it. I can say that I am a Superdad, but I’m not a perfect dad. I still have room for improvement.” 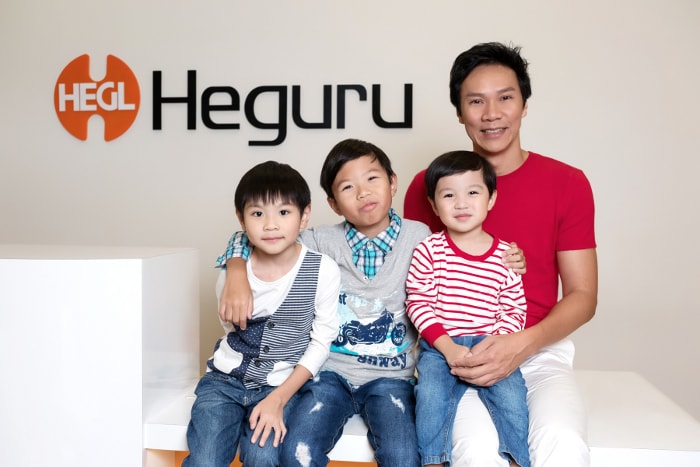 Brandon admits honestly that after having children, conversations between him and his wife has mainly revolved about their children. “Because we don’t have our own time anymore, we hardly communicate with each other. Both of us are very patient towards the kids, but we are not as patient with each other. This part, I know I have to improve.”

As we wrap up the interview, he proclaims with a sense of bewilderment, “The love I have for my kids, is so amazing. If I have to make a choice, I can die for them. I can really feel it. My kids bring so much happiness to me.”

While he enjoys taking different characters in his work as an actor – we hear he’s playing an alien in an upcoming series – it’s clear that when the camera stops rolling, he will still continue on with his new found role as a father.

And he is relishing every minute of it.

This was first published in The New Age Parents Enrichment and Preschool Resource Guide.

For more enrichment programmes and preschool tips, read our Enrichment and Preschool Resource Guide, or download it here.

Heguru Education Centre has been selected as one of the nominees for The New Age Parents Choice Awards! To cast your vote, head over to The New Age Parents Awards 2019 – Cast Your Votes Now! and stand to win attractive prizes. Voting ends on 15 Sep 2019.

Running a service or business targeted for parents? Reach out to a wider audience in our Best Enrichment Classes compilation. Leave your contact details here and we will get in touch with you.