In the study of Chinese Name Analysis System (八字生肖姓名学), surname represents one’s relationship with parents, whether he or she is well provided for by the family, a person’s intelligence, academic performance during school days, creativity, status, reputation and more. Having an appropriate surname enables one to enjoy a good head-start in life. For a lady, surname determines the quality of her husband. 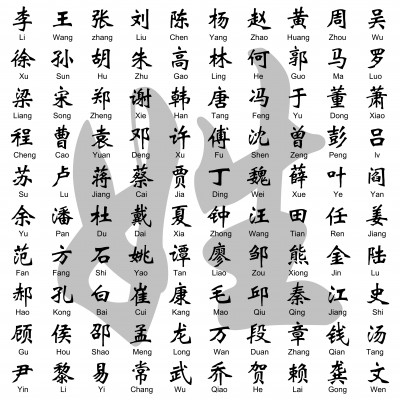 Mr and Mrs Tan just got married in 2016. They are my clients who have consulted me in their house Feng Shui and have also engaged me to pick an auspicious wedding date for them. During the consultation, the young couple also asked me when would be an auspicious year for them to plan for a baby.

Apart from analysing their Ba Zi, I also factored in the Chinese surname, which is Tan or 陈 in simplified Chinese. I wanted to make sure that the child will inherit a suitable surname that can bring luck to him or her in future – especially in the academic and career developments.

“Have a rooster baby quickly instead of going for a dog year baby.” I told them.

“Based on your surname Tan, your baby born in the rooster year will grow up to be intelligent and more outstanding than the peers. This baby will also have the caliber to become a leader in future.” I added.

Now, in your mind, you will probably be asking what is so special about the surname Tan. Let me explain. The Chinese character of Tan, which is also written as 陳 in the traditional way, comprises components that belong to 耳 and 日. In our Chinese Name system, it is deemed as very auspicious for a rooster to see 日 which is the Chinese word for Sun. This implies that the rooster is conferred with the authority to command the world. After all, rooster crows and wakes every one up when the sun rises.

More interestingly, the Chinese radical 耳 (which means ear) in the surname further equip the person with an extra talent or Midas touch. For your information, another zodiac sign that likes to own a pair of ears is snake since both rooster and snake do not have physical ears sticking out like other animals.

Unfortunately, most of us are not able to change our surname if things turn out to be against what we want. In this instance, we would then have to rely on the careful selection of middle and last Chinese characters in the name to neutralize the negative influence of the surname and simultaneously enhance other aspects of the child’s destiny path.

General Characteristics of people born in the Year of the Rooster 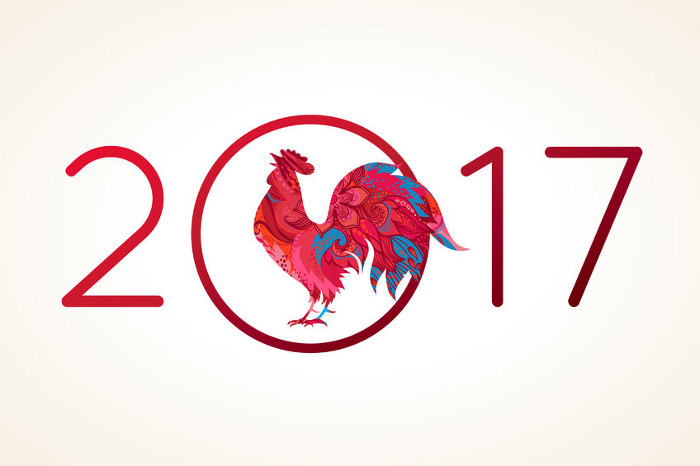 Let us first understand the nature of the rooster.

Among the 12 Zodiac Signs, rooster occupies the 10th position. Its element is metal and it represents the western direction. This beautifully feathered fowl is considered to be slightly luckier as compared to some of its zodiacal counterparts since it is usually well fed and raised by people. It lives in a sheltered and protected environment and generally does not need to risk its life to look for food in the wild. In terms of diet, it feeds on grain and rice and it is never a meat eater.

The rooster, or also known as the cockerel, is regarded as trustworthy simply because it never fails to crow at daybreak. Besides, it carries an air of elegance and class but could be deemed as arrogant and egoistical at times.

People who belong to the rooster sign are generally good-looker and skillful in words. They receive good supports from the elders, bosses and colleagues. Although they may look gentle from the outside, they can be quite resolve and principled as they have a mind of their own. They do possess leadership quality but they should be mindful not to over assert their authority and appear to be condescending. Otherwise, this will become the pitfall in their life.

By knowing the intrinsic behavior of the rooster especially from the Chinese astrological aspect of it, the ancient masters developed this Chinese Name system with the aim to improve a person’s well-being. Every Chinese name character carries certain energy which can cast either positive or negative effect on the child or adult depending on their destiny chart.

Which Chinese Surname will provide a good head-start for your Rooster Baby? 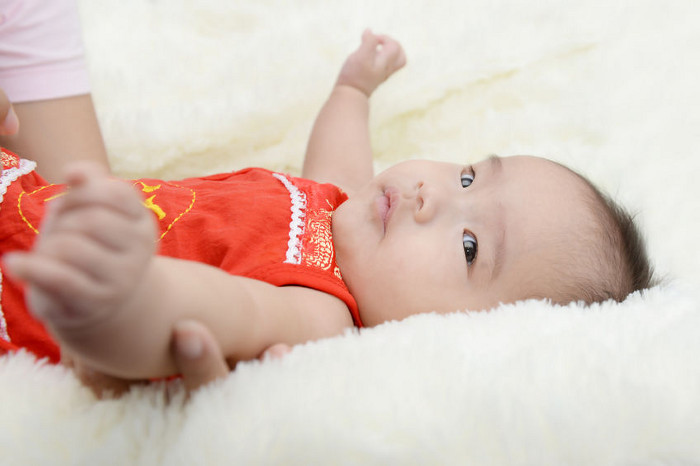 Let us now take a deeper look at the dos and don’ts when you are selecting the name for your baby. First of all, it would be preferable for rooster babies to be born into families carrying surname such as:

It does not favour surnames such as:

The approach to selecting good names for your baby is a rigorous and holistic one because not only there is a need to ensure the names complement the baby’s destiny chart, individual Chinese character within the name must also contain the right sound, right shape that ultimately create the right result for the child in all aspects of his or her life. It is also of paramount importance that the given name is compatible with both parents’ Chinese Name and zodiac sign.

In fact, many today are seeking help from name experts to enhance or improve their study, romance, career luck and even one’s behaviour.


Which Chinese characters are suitable for babies born in the year of Rooster?

It is considered a taboo to use radicals or characters that contain 卯which suggest the presence of rabbit or wood element. In the study of Chinese Astrology, Rooster and Rabbit have conflicting energies. Having such character in the name implies poor inter-personal relations with peers, accidents and lack of helpful people. Such type of conflict is also known to be one of the 6 clashes in the study of BaZi.

Considered as a serious violation of the Chinese Name principle to see radicals like 戌and 犬as it is a punishment on Rooster sign from BaZi point of view. If such word exists in the middle name, it will lead to stress in marriage and relationship with peers. If it is present in the last name, it will lead to issues with personal finances, challenges in career and even strained relationship with subordinates and children.

Not good to see 心or 月 or 忄radical because such words are associated with heart which is deemed as part of our flesh. Rooster does not feed on meat. In this situation, the person having this character in their name will find that they are not able to receive help from people.

Radicals that have shapes like 八, 又, 儿imply the rooster is sick since a strong and healthy rooster stands on one leg. It denotes lack of focus or determination. Overall, this signals instability in one’s life.

Rooster sign belongs to metal element and therefore it will be inauspicious if the name contains radical that belongs to fire and wood element since it results in conflicting energy. For instance, radicals that carry shapes like 木, 火, 灬 are to be avoided.

Radicals such as 人，亻，彳 is a symbol of human. This is definitely not a positive sign because it means the rooster is going to be slaughtered for offerings. So, the person having such character in the name can be defensive in his or her dealings with others or the person often has to make sacrifices in relationship or at work.

Radicals such as 刀,刂,矛,匕,戈,矢,斤,片 represent weapon. It has the same implications as above sub paragraph. In addition, it can also lead to bodily harm, surgery and crises in life.

In the study of BaZi, such characters or radicals that contain 子 or 氵symbolizes water element or rat zodiac sign which is detrimental for the rooster. In the study of BaZi, rat and rooster form a punishment. Chinese also has a saying that this is an image of drenched chicken. The outcome is disastrous in terms of finances and one will suffer great losses once in a life time. 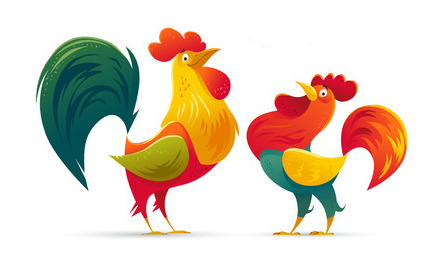 Good to see radicals like 几 or 弓 because such characters symbolizes 蛇or snake and it forms a 三合 [San He] or 3-Harmony relationship with rooster which is extremely powerful and auspicious. For your information, Snake, Rooster and Ox form this trinity.

Good to see radicals like 丑 or 牛 because such characters symbolizes ox which forms a 三合 [San He] or 3-Harmony relationship with rooster which is extremely powerful and auspicious.

Rooster feeds on grain, cereal, maize and rice. The presence of radicals like 禾，豆，米 in a person’s name allows him or her to receive continual support and help from friends and colleagues.

Radicals or words that symbolize or represent dragon form a 六合 (Liu He) or 6-Harmony relationship with rooster. This is another auspicious combination that boosts a person’s luck in career, marriage, fame and status.

It is good to see糸、衣、采radicals as this implies that the rooster is dressed up and promoted to be a phoenix and this will lead to a rise in status in the society and gain of respects from others.

Rooster enjoys staying in cave and feels protected with roof or shelter over its head. Having radicals or words like 口，穴，门，广，册 in one’s name means stability in career and relationship, supportive relatives, friends and smooth sailing life.

The list of characters here either contains one 口 or日. There is a saying in Chinese that when rooster open its mouth, it commands the world. It is very good for career and reputation. However, do note that having more than one of such radicals will lead to petty people instead.

All these words, if you observe carefully, are standing on ‘one-leg’. There is a phrase in Chinese known as 金鸡独立 or Golden Rooster Resting on One Leg. This means the rooster is strong and healthy. In another word, the person is steady, outstanding and healthy.

In the study of BaZi, Rooster belongs to metal element. So, it will be very good and very auspicious to use above characters or radicals that contain earth element such as 土 simply because earth will produce and enhance the metal element.

The list of examples above is not exhaustive but has addressed the essence on some insights and perspectives on Chinese Name Selection for babies.

Master Jo Ching (莊裕善老师) is the founder of DestinyAsia Global Consultancy and Master Trainer of Destiny Academy Pte Ltd. Besides providing professional advices to clients on their home and office feng shui, destiny analysis and auspicious Chinese Name selection, he also conducts professional feng shui courses and corporate talks. He is frequently quoted by media like Lian He Wan Bao, Asiaone, The New Paper, RazorTV, Yahoo and etc. Visit his company website at www.masterfengshui.com or contact him at joching@destinyasia.com.sg