A Mother’s Dilemma: My Child Is Growing Up Too Fast

When Sam was less than a year old, I’ve always wished that he would grow up a little faster so that I can be freed from all the night wakings, teething issues and feedings. 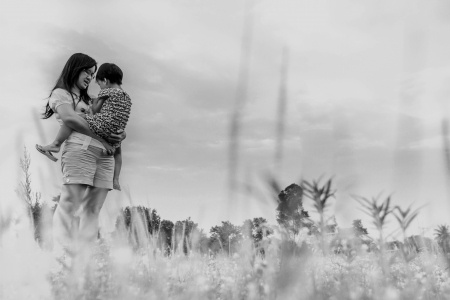 When Sam was old enough to attend playgroups at a regular kindergarten near our home, I wished that he was more independent so that he wouldn’t cry so much when I have to leave him at school.

But when Sam eventually grew to love school, I felt a little sad knowing that my son is happy to leave me and enjoy his friends and teachers at school.

It’s a dilemma isn’t it?

I face this dilemma especially after a hard day’s of work at home – that they would grow a little faster, that they will be a little more independent, and emotionally less clingy and needy.

Yet when it does happen, I feel sad knowing that they will soon need me no more.

When Sam started to walk, I noticed that he desired to be “released” and be granted the freedom to run around and explore his environment. Now that he is about 22 months old, that desire is even more visible. He is constantly seeking for autonomy to make his own decisions and to be on his own, such as choosing the activities he wishes to do, climb up the slide by himself or to slide on his scooter on his own. If I insist to guide him when he wants to do it on his own, he would kick up a huge fuss and throw himself on the ground and cry.


Whenever that happens, it would remind me that Sam is really growing up. I will have to eventually grant him wings to be independent and to “fly off” on his own. This realization that my child will soon need me no more makes me sad. But I know that I will have to release him sooner or later as I cannot possibly be guiding and holding his hand when he is 30 years old.

He will need to learn (gradually) how to problem solve on his own and grow through the mistakes that he makes – that will allow him to grow into a more independent, responsible and confident person.

I remember the first time I had to ‘release’ him to let him learn to be confident on his own without me being around him. It was during the first few weeks of school (I had enrolled him for a 2 hours playgroup) when Sam was about 18 months old.

I remember how I would try my best to say my goodbyes as confidently as I can without embarrassing myself with the tears that are about to fall from my eyes. Thereafter I say my goodbyes I would hide at a corner outside of the school to cry. I would then peep into the classroom to see how he is adapting in school. 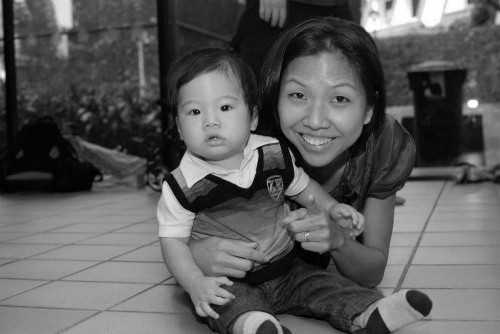 Yvonne with her first born, Sam.

It is important for our children to have adequate space to grow up independently and to learn to solve their problems on their own. It may be a good habit for parents to avoid giving them all the answers to the questions that they may have, but to gently guide them to the answers instead – such as offering the dictionary as a resource instead of just spelling the word for them.

Hitting those growing-up milestones presents a challenge for both child and parent, says Ann Tiemann, founder of Amytiemann.com and editor of ‘Courageous Parents, Confident Kids’.

“Often, our identity and self-worth comes from our role as mothers, which is wonderful – but it can be a problem if you’re not ready for kids to go do what they need to do,” she says.

Studies show that parents who do not allow their children space to grow up independently or hover excessively may produce more anxious, vulnerable and closed-minded children as compared to those who are given more freedom and responsibility.

Allowing Them To Grow Up

Dr. Milton Anderson agrees that the more aware parents are that this is what we are preparing our children for all along, the easier it will be to accept the changes as our child grows up.

“Parents can help themselves by participating happily in the rituals that go along with a child’s preparation for going to college, grade school, getting ready for a junior prom or a dance,” he says. “A huge amount of psychological work happens with a parent and involves a lot of thinking about the future together.”

As parents, we have to constantly remind ourselves that the growth of our children and their independence is a natural progression. There will come a time when we will have to let them practice the skills we have taught them independently so that they can survive on their own. And this will happen progressively.

Although the reality is we may fear that they will not need us anymore as they grow older, it is important to remember that releasing them may do them more good than bad. They will still need us to continually ‘check-in’ and see how things are going for them, to guide them by the sidelines.

Allowing Them To Learn From Mistakes

There is more learning when one goes through a bad choice and learn from the consequences than just a speech would cover. Such little life lessons are precious, don’t let them slip by because of your anxiety and fear.

No one ever said raising children was easy. When the time comes to let your child spread his wings, remember that this is what you have been preparing for him to do as he grows up. Like a caterpillar that has just broken out of its cocoon and is required to take its first flight as a young butterfly, our children need to take their first flight to practice what they have been taught so far. And this will help them to be a responsible and self-sufficient adult.

Therefore as hard as it can be to let go, it is important for me to grant Sam space to grow his independence and autonomy as a preschooler. In fact, when our children grow to be more independent, it shows that we have accomplished our parenting goal to “let them go”.

So enjoy and congratulate yourself on a job well done!

What’s the hardest dilemma you faced being a parent? Share them with us in the comment box below.