Grimm’s Fairy Tales By I Theatre

Once upon a time, there lived a little tailor. One day, he killed seven flies with his bare hands. So he sewed ‘7 at 1 stroke’ on his vest. 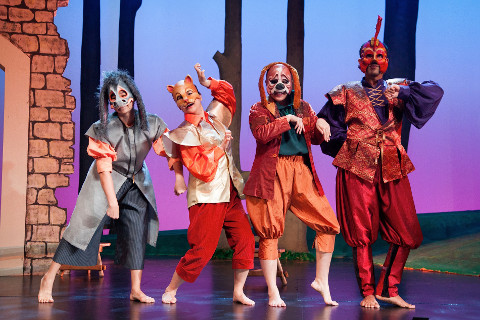 Does it ring a bell? Probably not, since the story came off as a fresh fairy tale to me! Presenting to you the story of The Valiant Little Tailor, who used his wits to win the hands of the princess.

Written and directed by Brian Seward, Artistic Director of I Theatre, with 18 years of experience in the industry, and Bang Wenfu, the experienced and skilful composer. There is no way you can miss this production! Recommended for ages 4 to 16 and families, the musical draws attention to values like respecting your elders, and listening to your parents. 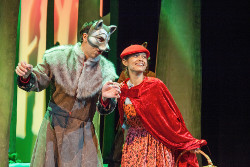 What’s there to say no to when you are paying one price for nine fairy tales? The play starts with animals including rooster, dog, donkey, cat, fox, wolf, sparrow, and goose telling their own story, reflecting the ugly traits of human beings. To me, that was just the appetizer, the best is yet to come, the main course. The actors brought life to the characters, adding a tinge of humour, bringing entertainment to a different level for the audiences!

How could we forget, the actors that painstakingly switch characters, and change into different costumes, in such a short time! Did I mention that with one background set, the casts told nine stories? The works of an award-winning set designer, a set that is surreal with a pinch of real-life aspects!

We loved the part of the show when Hansel and Gretel got off the stage, walking through the audience, generating a commotion. It was refreshing to see the performers telling the story of Rapunzel through puppets, an entertaining experience for the audiences! Another intriguing aspect was when the actors walked on their knees, to give the impression of little people. 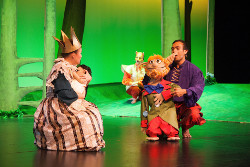 Catch Grimm’s Fairy Tales – With so many tales entwined into one play, try identifying the different fairy tales, and be taken by surprise!

The play is 90 minutes, with a 15 minutes interval.

For show details, and purchasing of tickets, click here.

Written by Heather Yew, photos by I Theatre