Going Back To Work And Breastfeeding: Project Liquid Gold

To advocate and raise awareness that returning to work should not be a key barrier to breastfeeding, NTUC U Family launches “Project Liquid Gold”. Since 2012, the U Family community has identified breastfeeding as one of the causes that it would advocate in support of mothers at workplace and community.

In April 2013, NTUC U Family carried out a poll on 231 married women who had returned to work full time after their maternity leave and have a child of 3-year-old or less. 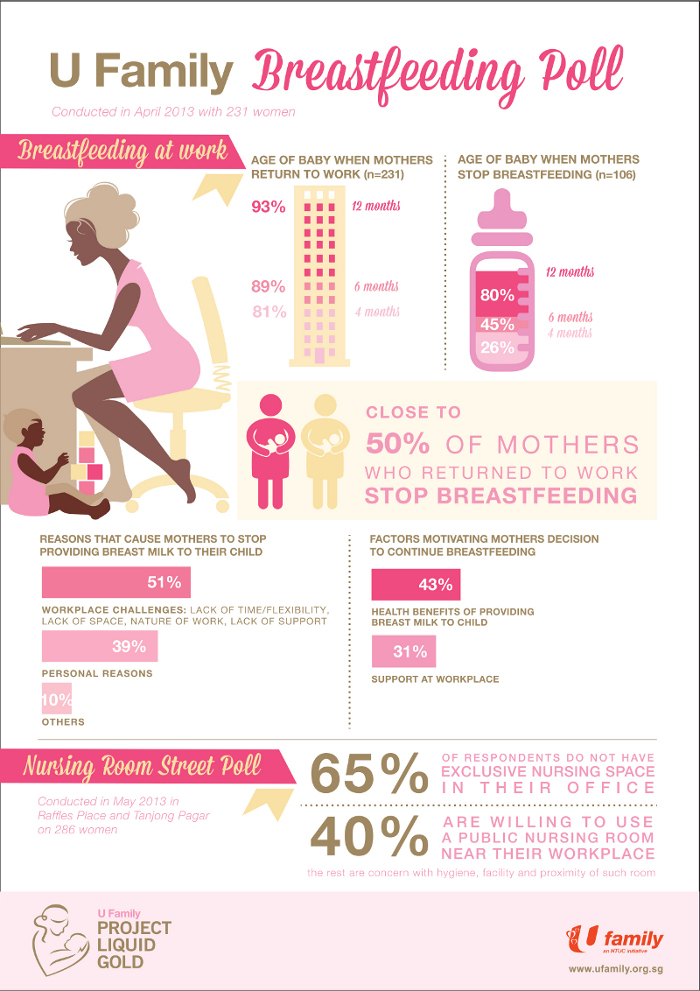 Key findings showed that majority of the respondents at 81%, returned to work by the 4th month, according to their entitlement of paid maternity leave given to working mothers.

This is despite the World Health Organisation’s recommendation that mothers should provide exclusive breastfeeding to babies up to six months of age, with continued breastfeeding accompanied with appropriate complementary foods up to two years of age or beyond.

The key reasons respondents stated as to why mothers stopped providing breast milk after they return to work were: 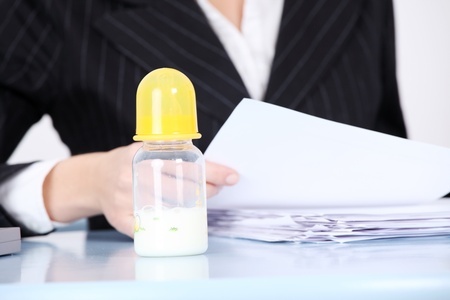 To supplement the poll results on the lack of lactation facilities at workplaces, a street poll on 286 women at Tanjong Pagar and Raffles Place were carried out to find out if offices in the area provide mothers with exclusive nursing spaces.

65% of the respondents said that their workplaces do not have a nursing space. Close to 40% of these respondents indicated that they were prepared to use a public nursing room, if there is not one provided at their workplace. For the rest of the 60% who were not too receptive, they stated hygiene, maintenance of the facilities and inconvenience as concerns.

Aside to this, NTUC U Family also found out that there are currently 109 public nursing rooms available across the island as at March 2013. Most of which are located in shopping malls, hospitals, hotels and tourist attractions. Seemingly, there is a lack of such public facilities in certain office districts, for example the Central Business District (CBD) area, Changi Business Park and One North Business Park.

Action plans by NTUC U Family

NTUC U Family calls for office building owners and employers to provide suitable nursing rooms spaces at workplaces that are shielded from view and free from intrusion and also to render reasonable break time for female employees to express their breast milk.

“From our poll results, most mothers stopped breastfeeding their children when they turned one year old, and stated lack of lactation facilities and support at work as one of the main causes. More can definitely be done to allow more of our mothers to continue providing breast milk to their child beyond 6 months. If more office building owners and employers can provide suitable nursing rooms or private spaces at workplaces for this group of working mothers, then returning to work will no longer be a barrier to mothers who wish to continue to breastfeed their children,” said Ms Cham Hui Fong, NTUC Assistant-Secretary General.

With three business districts – CBD, Changi Business Park, One North, that NTUC U Family has identified to have inadequate nursing facilities, the community will be working closely with unions in these areas, or directly with the building owners and employers there to advocate and garner the support of providing with such nursing facilities.

As part of the launch, NTUC U Family is also working with the Healthcare Services Employees Union (HSEU), to give out 200 free breast pumps to working mothers from low-income families at KK Women’s & Children’s Hospital and needy members of NTUC. This little effort will go a big way in helping the needy families in providing the most nutritional form of food to their new-born babies.

The Labour Movement supports the recent Government’s move in proposed changes to the Building Code to include dedicated nursing rooms in public buildings. It is also as important that dedicated nursing rooms or space that is shielded from view and free from intrusion are provided in office areas where mothers, upon returning to work can continue to express breast milk for their children beyond the age of six months.

Moving forward, U Family will continue to engage various stakeholders as we believe every employer, employee, community and the unions, has a role to play in Valuing Every Worker, Every Community and Family, and should collectively work towards our vision of a home where residents are happy, and fathers are active in shared parenting and mothers rejoin the workforce.

About U Family
NTUC established the Family Development Unit in October 2007 to build up a community of strong and happy families in Singapore with the development of family-focused initiatives and programmes to strengthen family bonds. The unit was subsequently re-named as U Family in May 2008 and expanded its work to support working families by advocating pro-family practices at the community and workplaces. With its current outreach base of more than 200,000 members, U Family aims to develop a workforce with high women employment rate supported by strong and happy families.

This article is part of Breastfeeding with Love campaign, initiated by The New Age Parents and New Age Pregnancy.

Join the Breastfeeding with Love Group to find out more and be part of our breastfeeding online community!

Click on the logos to find out more about our supporting partners.