Those Were The Days: Interview with Educators Janet Doman, Esther Lim and Brian Caswell 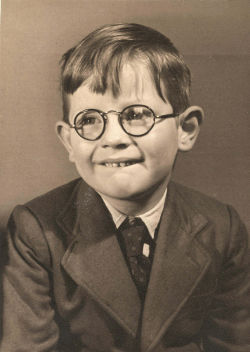 Ever wondered what was it like growing up as a child for these educators?

Janet Doman, Director of The Institutes for the Achievement of Human Potential (The Institutes) grew up at The Institutes and was pitching in to help brain-injured children by the time she was nine years old. Esther Lim, CEO & Founder of LEAP SchoolHouse, remembers how her childhood mostly revolves around doing things with her mother and playing catch throughout the whole block of flats with her neighbours. Brian Caswell, Dean Research and Program Development for MindChamps, grew up in the mountain country of North Wales and England, before moving to Australia at the age of 12.

The New Age Parents took them for a walk back to nostalgia lane, as they shared with TNAP where they grew up, how they spent their childhood and their thoughts on today’s children growing up.

TNAP: Which childhood era were you from? 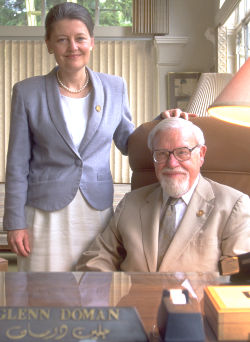 TNAP: Where did you grow up and what was your childhood like?

Janet: I grew up at The Institutes for the Achievement of Human Potential, in Philadelphia, Pennsylvania. For me it was an ideal childhood. First, we are very lucky to have a beautiful campus that gave me a woods to play in, a large garden to plant every year and beautiful shrubs, trees and flowers to care for and enjoy. As a child, I loved every inch of it and I still do.

Second, although my parents were working very hard they were always close by and I could be with them whenever I wanted to be. This was wonderful because it allowed me to be a part of the world of the children and adults who were brain –injured and needed help.

Esther: I grew up in a ‘no-room, no hall’ rental flat in Toa Payoh as a young child till I went to primary school. My father was the sole breadwinner. My childhood mostly revolves around doing things with my mother and playing catch throughout the whole block with children from the same block of flats (that’s how we became friends). I think those were really pretty carefree days!

Brian: I was born in Wales in 1954. I grew up in Wales and England, before moving to Australia at the age of 12. I had a wonderful childhood considering we had very little money, because my parents never allowed anything to become a barrier. My early years were spent in the mountain country of North Wales, where there was great opportunity to explore Nature and connect with the land. As we could not afford to buy books, and there were no libraries, my mother solved the problem by writing stories during the day and reading them to us at night, bringing the characters to life for us, and encouraging us to join in with the story-telling. I grew up with the understanding that stories were something you created and shared, not something you bought and consumed. I think it is largely responsible for making myself and my brothers comfortable with our imagination and creativity, in turn enabling us to spend our lives ‘pushing the boundaries’ when necessary.

Janet: I was permitted to help from a very early age and this gave me opportunities that were invaluable as I grew up. I always thought that I was a staff member. Of course I went to school which was fine but I loved to be home with my parents, the hurt kids and the staff working in the clinic doing whatever job they gave me to do.

Esther: We were a middle class family so there were no fancy toys to play with and outings to look forward to every weekend. I do remember going to my grandma’s place every Saturday evening. On my maternal side, I have 9 Uncles and Aunties so I had loads of cousins to play with. Mid-Autumn and Dumpling Festival, Chinese New Year Eve, I remember having loads of fun during those occasions! We would make kuehs along the HDB corridors (Yes, we did that! ), steam homemade bak-chang and fight for that last morsel of mooncake.

My mother, I must say, was really creative in planning things out for my brother and myself to occupy our time. She would suss through papers to see if there are interesting community centre activities for us to participate in and trips to the library was always an agenda. So as a young girl, I participated in block art competitions, attended sewing and crochet lessons at the community centres. On the rare occasions when my father did not have to work, there would be morning walks in the parks or to the Macritchie Reservoir for a jog. I always look forward to those days as it means a hearty breakfast treat after that!

Brian: In Wales, we spent a lot of our time exploring the meadows and woods around where we lived (often with adult supervision, but sometimes when it was safe, we explored alone). Our parents believed in ‘discovery learning’ – that you remember best what you discover for yourself, rather than what you are ‘taught’. In England (from the age of 6 onwards), we played sport, went on trips along the canals in a boat 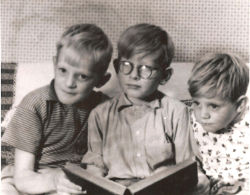 that my father built in the back-yard, and had a house full of animals (My father, by that time was an RSPCA inspector). The ‘hands-on’ experiences with the animals taught us more than any course in biology.

My father had left school early, without much formal education, so he spent the rest of his life educating himself. He was interested in everything and the house was littered with books on all subjects. Because of my early exposure, this inculcated a life-long love of reading. I naturally devoured, boosting my general knowledge exponentially. As a result, school was never a difficulty, as there was nothing they tried to teach me that was anywhere near as challenging as what I was reading on my own at home.