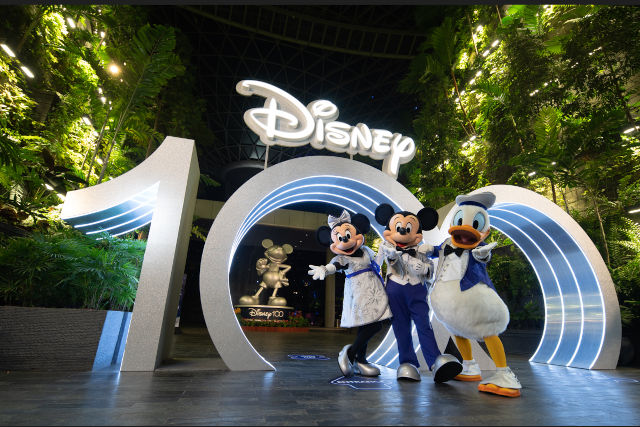 Jewel Changi Airport (Jewel) launched a range of Disney-themed activities and retail offerings for travellers to enjoy when they visit Singapore. The Disney100 activities and displays pay tribute to nearly 100 years of iconic storytelling from The Walt Disney Company. Jewel visitors will be able to explore a Disney100 Light & Sound Show featuring some of Disney’s most beloved characters and photo spots inspired by select Disney films. Shoppers can also enjoy retail offerings featuring Disney merchandise and collectables. 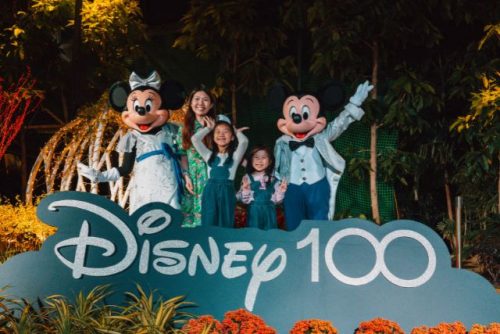 For the launch weekend from 12 to 15 January 2023, visitors can expect a dazzling new Light & Sound show, as well as surprise appearances by Disney’s well-loved special friends. Jewel’s marvellous Light & Sound show at the HSBC Rain Vortex will take on a Disney theme in conjunction with the activities. During the launch weekend, activities will kick off with a surprise performance, before Disney’s special friends meet visitors, and usher in a specially choreographed six-minute Disney100 Light & Sound Show at 7.30pm. Featuring beloved Disney characters, the Light & Sound Show has been curated by internationally acclaimed Los Angeles based water feature design firm, WET. Disney fans can sing along to a medley of songs including When You Wish Upon A Star, A Whole New World, You’ve Got A Friend In Me and the theme soundtrack from Marvel Studios’ Avengers: Endgame.

Beyond the launch weekend, visitors will be able to watch a shorter version of the Disney100 Light & Sound Show that will run from 16 January to 9 April 2023.

At the Shiseido Forest Valley, visitors and Disney fans will be able walk through a Disney100 archway and take photos in front of a 4-metre tall platinum statue of Mickey Mouse. The North Entrance is also where visitors can take photos with well-loved and special friends during meet and greet sessions happening at various times[1] from 13 to 15 January 2023. 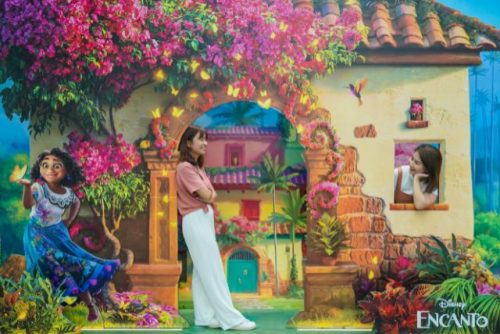 Visitors can also explore 10 Disney-themed photo spots on display at Jewel. Inspired by scenes from Disney, Pixar, Marvel and Star Wars movies and shows, these interactive photo spots at the Shiseido Forest Valley and Canopy Park will be available from 12 January to 9 April 2023, for visitors of all ages to capture special Disney moments.

The Disney100 photo spots pay homage to fans and families everywhere who have brought Disney into their hearts. The photo spots include iconic scenes such as Mickey Mouse in his debut film Steamboat Willy (1928) – the very first Disney animation with sound – and other memorable moments from popular films like Disney’s Winnie The Pooh (1977), Lion King (1994) and Encanto (2021), Disney & Pixar’s Toy Story (1995), Up (2009) and Inside Out (2015). This collection of specially designed photo booths will bring back fond memories of classic and iconic films that have touched the lives of many across generations. 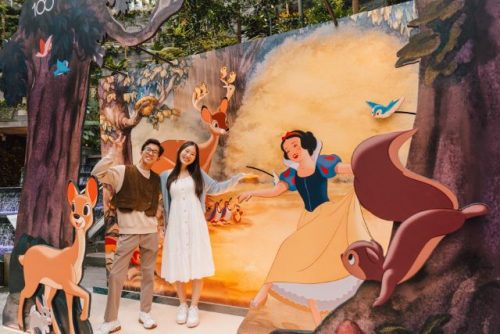 Guests who visit Jewel dressed in outfits inspired by their favourite Disney characters will also be entitled to free entry into the Canopy Park from 13 to 15 January 2023.

In collaboration with the Singapore Tourism Board (STB), four other photo spots called “Little Wonders of Singapore” have also been created to highlight intriguing elements of Singapore.

Disney fans will be able to shop in the Disney-themed Year of the Rabbit Tsum Tsum pop-up store, at Jewel’s Basement 1. Merchandise such as toys, stationery, apparel, homeware and more will be available. Shoppers can redeem a complimentary set of Year of the Rabbit Tsum Tsum red packets with a minimum S$80 spend in a single receipt, while stocks last. The Disney-themed pop-up store at Jewel, one of the largest in Singapore, will be open from mid-January to end February 2023. Visit Jewel’s website for more information on the pop-up.

After this, the retail pop-up will be transformed into The Wonder Store to feature Disney100-themed merchandise, with a wide assortment across Disney, Pixar, Marvel and Star Wars branded properties. Stay tuned to find out more in the coming months. 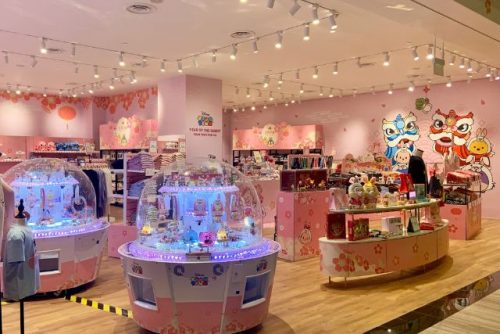 James Fong, CEO of Jewel Changi Airport Development, says “Creating wonderful memories for all our visitors continues to be what drives us at Jewel. Disney inspires us to offer our guests more opportunities to bond with their friends, family and loved ones. We are proud to be bringing a touch of Disney’s iconic stories and characters to travellers, fans and families in Singapore to create delightful memories together. We are also grateful for the support of the Singapore Tourism Board to present the unique range of Disney100 displays at Jewel.”

“It is our wish that every guest to Jewel, both local residents and travellers alike, will enjoy themselves and find time to come back again during the year. Be Our Guest and Assemble at Jewel to create your special Disney moment soon!”

Keith Tan, Chief Executive, Singapore Tourism Board, added, “Since 2016, our collaborations with The Walt Disney Company have given us the opportunity to bring joy and happiness to Disney fans and families from across the globe. We invite both locals and overseas visitors to enjoy the special activities that pay tribute to Disney’s iconic storytelling at Jewel, which are among a series of new and refreshed events that Singapore will offer in 2023.”

To coincide with the Disney-themed activities, shoppers stand a chance to win an all-expense paid trip for four to Hong Kong Disneyland when they shop at Jewel Changi Airport or at 15 CapitaLand malls that are ushering in this Lunar New Year with Disney-themed “Year of The Rabbit” festivities. 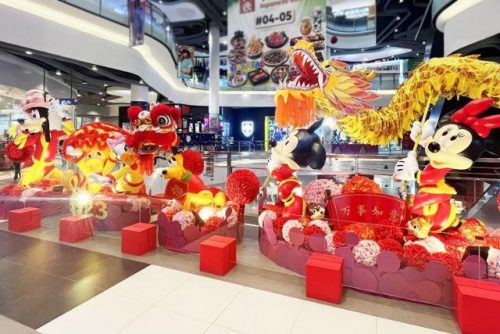