Is Speaking Singlish Really That Bad

We have all spoken, used it or even tagged ourselves to it- Singlish, Singapore’s very own colloquial English.

It’s a means for us to connect and communicate, make meaning when the ‘conventional’ means of using ‘standard English’ is not quite accurate (I mean, how do you tell someone that the nasi lemak is ‘lemak’ and well worth the 3-hour wait?). Yet, there is a level of distinction that sets Singlish to be a less than perfect language to be associated with especially as a language for communication on a formal platform. 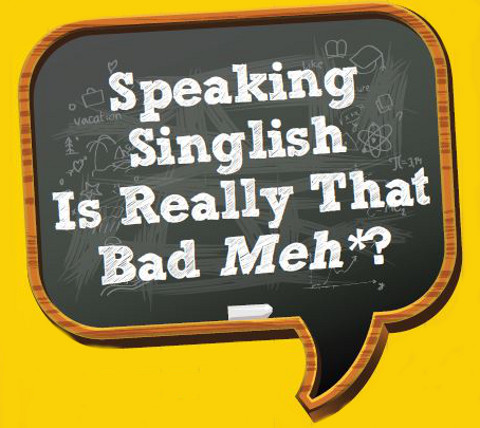 Here’s my little take on the above already confusing issue.

Personally, I feel that language must first be acknowledged that is a medium for communicating our ideas and thoughts. If people can understand it, then it is good no matter what matter whether it’s Singlish or not. That said, all languages have their distinct nuances and for Singlish it is the peppering of our communication with ‘non-grammatically correct’ sentences, lehs, lahs and arbitrary self-made pronunciations. Hence to draw the line and make the littlies understand what is English and what is not is no rocket science. Point directly to the nuances.

What is equally important to highlight is that the context of use as well as who we are using the language with is just as important as the form of use of the language. For example; if I were to meet the president of the United States in my living room, I will still greet him formally as ‘Good day to you, Mr. President’ versus ‘Hey yah! It’s very hot hor!’ Even IF he were my best friend, we don’t say things like that.

So Is Singlish A Good Form Of Language To Pick Up?

I feel it is not whether it is good or bad. It is a language we cannot avoid picking up and knowing because fundamentally language is a culturally fixated entity. It is a means by which we can culturally identify ourselves to others and with each other. The issue as pointed out by an article I read by Chng Huang Hoon (National University of Singapore) could possibly be that Singlish lacks is “international intelligibility”. Whilst there are many arguments on whether Singlish is boon or bane, fundamentally there is this need to still let our little ones know the distinction of when ‘English’ is ‘Singlish’. As parents, how can we convey that message to them in a comprehensible manner that can be accepted by our kids?

Avram Noam Chomsky is an American linguist, philosopher, cognitive scientist, logician, historian, political critic, and activist. He once mentioned, “Language is a process of free creation; its laws and principles are fixed, but the manner in which the principles of generation are used is free and infinitely varied. Even the interpretation and use of words involve a process of free creation.”

So let’s tackle this from the following angles when we are talking to our kids on language use.

As parents, set a good example. Learn to speak with the right tone, choices of words and content to be used. Kids pick up the easiest of things through modeling. Speak to them in the proper language tone and they will respond accordingly.

2) Correct and explain why

Research shows that a child typically needs to have a mistake corrected at least 20 times before he/she can internalize a concept. Don’t instill punishment as a means to correct the use of a language. I know it is hard and will test one’s patience to the extreme but it does take time to undo a learning behavior and that includes language use.

3) Let them hear what they are saying

It sounds strange but it is true that receptiveness to change becomes greater when one purposefully makes the effort to dive deep into the issue at hand. With language, listening and speaking works hand in glove. You will speak as to how you received the information. Be purposeful in listening to the language use out there with your child and clarify their doubts on what’s the proper way to use the language in the given context.

By Esther Lim, CEO and Founder of LEAP SchoolHouse.

Born and educated in Singapore, she holds a Master Degree in Education (NTU/NIE), Bachelor Degree in Arts (NTU), Diploma in Marketing – Top student for the year 2000 (Chartered Institute of Marketing). Esther has more than 10 years of teaching experience and has taught widely in both Secondary and Primary schools. She was also involved in curriculum planning and development work for the primary unit at MOE for several years. Esther has also conducted workshops and talks for educators, locally and overseas. Esther is also a mother of three children.