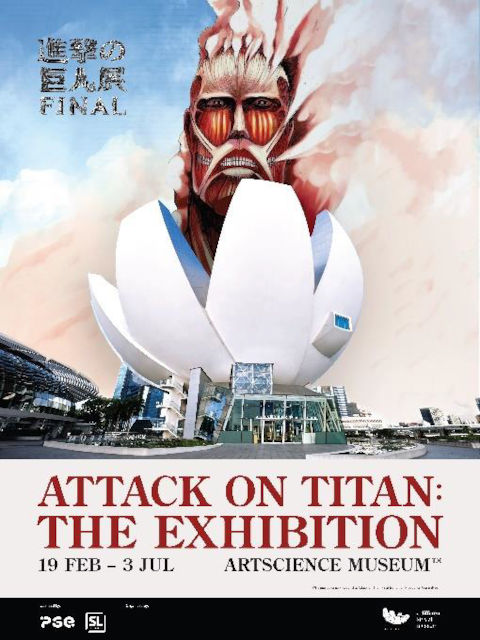 Visitors will soon be able to step into a world where humanity’s existence is threatened by gigantic humanoids at Attack on Titan: The Exhibition, opening at ArtScience Museum on 19 February 2022.

Based on the best-selling Japanese manga series written and illustrated by Hajime Isayama, the exhibition will draw visitors into his visionary imagination, introducing his intricate worldbuilding and vivid characters.

Organised by SPACElogic, Attack on Titan: The Exhibition will be premiering in Southeast Asia at ArtScience Museum during the highly-anticipated release of The Final Season Part 2 of the anime adaptation on Netflix this month.

As viewers watch the culmination of the saga, visitors to ArtScience Museum will encounter Hajime Isayama’s master storytelling and artistic vision over the past decade. Featuring over 180 artworks by Hajime Isayama ranging from the manga’s earliest days to the present, Attack on Titan: The Exhibition will also showcase new pieces that have not been displayed anywhere else in the world, alongside drafts and sketches from his archives.

Hajime Isayama’s dark fantasy began in 2009 with the premise that humanity is on the brink of extinction, hiding behind walls to fight against mindless but powerful man-eating humanoids known as Titans. Since then, the story has evolved into an elaborate saga that transcends cultural boundaries, spawning live-film adaptations and captivating a global fanbase with over 100 million copies of the manga sold in print. While the manga’s recent conclusion marked the ‘end of an era’ after an 11-year publication run, the series’ popularity surges on with its ongoing anime adaptation – its recent release of The Final Season Part 2 coinciding with Attack on Titan: The Exhibition.

Visitors and fans alike will soon be able to step into Hajime Isayama’s sprawling dystopia, which will include an immersive animated battle sequence set in The Great Titan Theatre as well as displays of Titans, characters, and objects from the manga. Hajime Isayama made the following comment when Attack on Titan FINAL Exhibition was held in Japan in 2019:

It has already been 10 years since I started writing Attack on Titan. I would first like to thank all the readers and parties involved for their company throughout all these years. Heading towards the end of the series, I am currently doing everything I can so that your reaction will be “I am glad I kept reading until now”. I hope you enjoy the Attack on Titan FINAL Exhibition and I would be happy if you continue engaging with Attack on Titan in the future.
– Hajime Isayama, 2019

“Since then, the series has come to an end, but I’m not sure if everyone here is thinking ‘I am glad I have been reading this’. However, my feelings have not changed. Today, I hope you enjoy Attack on Titan: The Exhibition and I would be happy if you continue to immerse yourself in the world of Attack on Titan and engage with the characters as you like,” added Hajime Isayama.

“Singapore is a familiar place for me as it was my first ever trip abroad, both personally and for work. I gave a lecture on Attack on Titan at the National University of Singapore and also travelled there with Isayama-sensei for a separate holiday. I have many wonderful memories of Singapore and it would not be an exaggeration to say that holding Attack on Titan: The Exhibition here was a long-cherished wish of ours. We look forward to sharing new and wonderful memories with the people of Singapore, and hope to see you all at the exhibition!” said Shintaro Kawakubo, Attack on Titan Editor, Weekly Shonen Jump Editorial Department, Kodansha.

“ArtScience Museum is delighted to be working with SPACElogic and the Attack on Titan team in Japan to bring this cultural phenomenon to Singapore for the first time. With Attack on Titan: The Exhibition, our visitors will encounter the creative vision behind one of the world’s most successful manga stories, seeing why the series has gained such international acclaim for its compelling characters, complex themes and technical artistry,” said Honor Harger, Vice President of Attractions, Marina Bay Sands.

“Launching this exhibition as Attack on Titan’s latest episodes reach our screens couldn’t be more timely. At first glance, Hajime Isayama’s science fiction world may seem remote to the reality we live in now. However, if we dig deeper into Attack on Titan, themes like hope and perseverance emerge as common threads. We also witness the resilience and resourcefulness of the characters as they overcome the consequences of an epidemic in their own world. Stories such as Attack on Titan provide many of us with a sense of escapism, but they can also remind us of our humanity and courage when facing difficult circumstances,” added Harger.

“As the global phenomenon of Japan’s manga industry continues to rise, we wanted to showcase a unique experience that delves deeper into the world of Attack on Titan. This is an especially significant journey for SL Experiences as it is our very first licensed exhibition, which we hope to bring many more of in the future. We are truly honoured to be bestowed the trust of the Attack on Titan committee and PIA Global to develop an experience that would befit this multi-award-winning Japanese manga created by Hajime Isayama. Making its premiere in Southeast Asia at ArtScience Museum, we hope that everyone can experience the beauty of this hugely successful manga as the exhibition offers one of the biggest and most comprehensive experiences for visitors,” said Augustus Peh, Chairman and Founder of SPACElogic and SL Experiences.

The first iteration of Attack on Titan: The Exhibition attracted over 450,000 visitors during its presentation across Japan from 2014 and 2015. It has since expanded to incorporate new artwork and content from the final chapters of the manga. This presentation at ArtScience Museum marks the overseas debut of the exhibition in its latest form.

The Attack on Titan: The Exhibition highlights 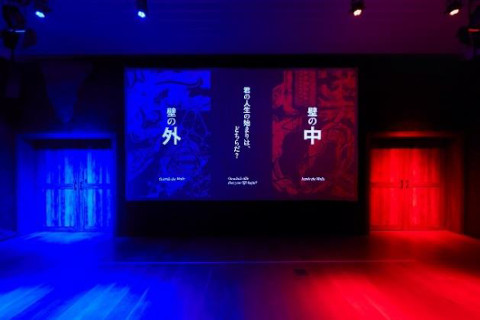 Visitors can choose a path to begin their journey 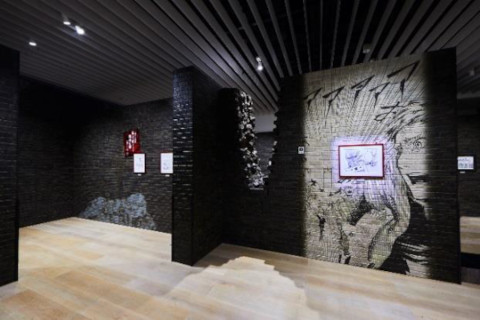 The exhibition features panels from the manga

In the series, a faction of humanity lives on an island surrounded by huge walls that protect them from the Titans while others live outside. Visitors entering the exhibition will have the option of picking a route and starting their journey as someone born inside or outside the walls. As the paths diverge, the opposing factions will focus on different aspects of the battle – the Devils residing on Paradis Island and the Warriors bent on destroying the walls – before they converge in an inevitable collision. 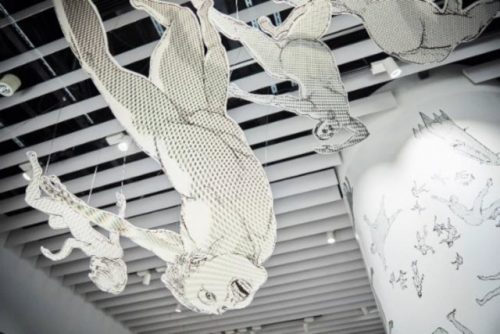 3D titans falling from the sky

In the next zone, visitors will get a glimpse of the world of Titans who appear to leap from the pages and wall panels. Visitors will learn more about iconic characters like Eren, Mikasa, Armin, Levi, Reiner, and Erwin as they fight for survival and unravel the mystery of Titans.

Through Hajime Isayama’s drawings, the exhibition will explore the manga’s worldview from various perspectives as well as showcase the evolution of his art. The artworks include early concept drawings and storyboards with dialogue handwritten by Hajime Isayama himself. 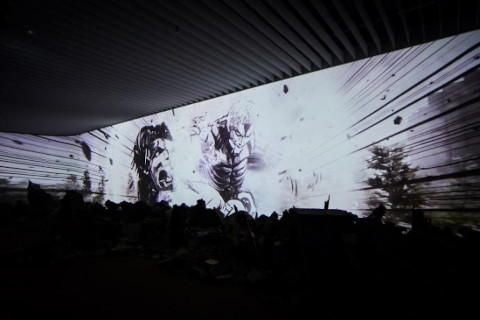 Another highlight of the exhibition is The Great Titan Theatre, where visitors will be able to witness an epic clash between the Attack and Armoured Titan. As the battle unfolds across a 10-metre screen, visitors will be presented with a spectacle set among the ruins of a battlefield. 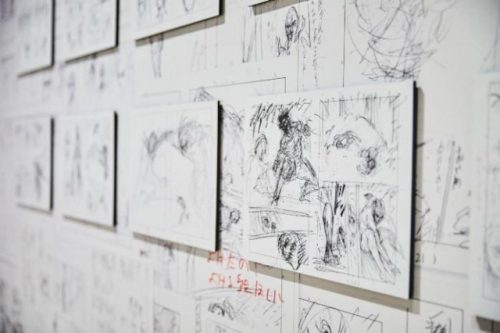 The exhibition will include an interview with Hajime Isayama, who will speak about the manga and reflect on the decade he spent creating it. In addition to its immersive environment, interactive displays, and behind-the-scenes content, the exhibition will mark the manga’s conclusion and the anime’s final season.

Attack on Titan fans will be able to buy exclusive merchandise that can only be found at the exhibition store and pose with their favourite characters and Titans at a photobooth.

Tickets are available for purchase from 20 January at all Marina Bay Sands box offices and website. Due to limited capacity and timed entry to the exhibition, guests are also strongly encouraged to pre-purchase tickets online prior to their visit.

You can get tickets to Attack on Titan Exhibition via Klook.

For more information on Attack on Titan: The Exhibition, visit here.