My Baby Hates My Food! 6 Tips For Handling Picky Eaters

When Sam started to reject the food that I offered him in April, I almost went bonkers.

He refused his usual foods and even his favourite snacks such as Gerber stars, baby bites and bananas. He would only open his mouth when his usual ‘Top One’ enriched wholemeal bread (the only loaf of bread I can easily find in the supermarkets that didn’t include the ingredients he was allergic to) was offered. And that was all he would take for an entire month, that bread, and nothing else. Given that he has a very strict diet due to his allergies, I was bumped not knowing what to do.

Many friends told me that it is a common phase for most toddlers and that it should ease in a week or two. But Sam’s rejection of foods lasted for more than a month and I was perplexed. Thankfully he was not rejecting his ‘Top One’ bread (which was easily accessible and affordable) and was willing to have it for breakfast, lunch and even dinner! Finally after one and a half months of rejecting his usual foods, he finally suddenly decided to try them again in June. 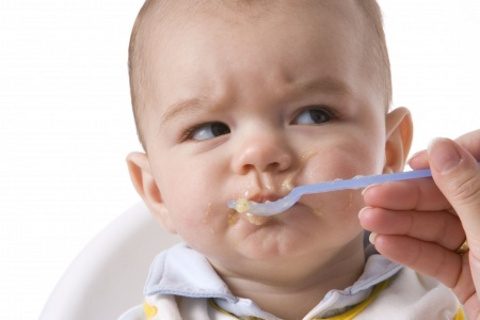 If you are a parent and your toddler is also going through the same thing, fret not! Here are 6 tips to help you through.

1. It is not unusual

It’s perplexing, but your child’s food fatigue is not as unusual as it seems, says paediatrician Jennifer Shu, MD, co-author of Food Fights. “Adults may suddenly become tired of the same foods, too.” It may be challenging to stay calm when your beloved child is refusing the foods you’ve painfully prepared, or seeing his weight dipping by the day. Yet, it is important for us to bear in mind that this (phase) WILL pass. Like adults, children have survival instincts and they will not allow themselves to starve. They will ask for food when they are hungry. Like Samuel, who asks for his bread day in and out during the entire rejection phase.

The truth is, nobody really knows why they fuss over food. It is best that we do not be too quick to judge that our children are fussy eaters because they may be going through some changes in their bodies. Our children’s interest in food will rise or fall – eating lesser during teething, spiking food intake during their growth spurts, dropping during bouts of defiance, and so on. But most toddlers would still consume the necessary nutrients needed to thrive during this phase.

Try not to look at your child’s daily intake, as long as his or her weekly total intake seems sufficient, and continues to gain weight or remains active and healthy (aside from the usual colds), there is actually little concern. However, should you notice any unusual weakness, lethargy, fatigue, fever, prolonged irritability, or weight loss, it would still be best to consult your doctor.

2. Do not take it personally

As much as you may feel offended and hurt when your beloved child refuses your food, or when someone who witnesses him in action rejects the food and comments that your food probably tastes too bland or awful, take deep breaths. Know that it may have nothing to do with your food. If you have already tried adding a little more flavour to your dishes and your toddler continues to reject them, they may just be going through a temporary phase, like any other toddler.

Bear in mind that your child is not rejecting you when he rejects the food you’ve offered in his bowl! It is also not a reflection of your parenting skills. I remembered that I was so dejected about Samuel rejecting all my cooked food that I made my husband eat them up even though he finds them squashy with all the dishes mixed up.

It was hard! I recalled trying really hard, using soft approaches such as pleading and cajoling him to eat, and also disciplinary methods such as scaring him with the occasional appearance of the wooden spatula to ensure that he would open his mouth to take his food – nothing worked. Most experienced parents who knew what we were challenged with jumped to conclusions that Samuel was a fussy and picky eater, and advised that I try stricter disciplinary methods, or distract him with TV programmes or even just leave him to starve. Some advised that I take a chill and backseat and this would pass. What was I to do?

In hindsight, now that he has started taking his food again, I noticed that Samuel could not take any food at all and he was very cranky because he was having extreme teething pains. After one and a half months of struggling with his rejection of food, the last of his first set of molars and bottom two canines finally made their appearance out of his gums. Guilt set quickly in my heart the moment I saw these three white pearly teeth. “My poor Sam!” The pain of these three teeth cutting through his gums all at the same time must have made him super frustrated, thus he wasn’t able to take in any food, let alone his favourites.

Avoid pressuring your child to take their food, as the truth is, we will never know why they reject the food. And the reason can be like Samuel’s. Research has shown that children who are pushed or coerced into eating are more likely to develop food-related problems. Let your toddler decide how much to eat and when to stop. This will teach self-regulating skills when it comes to food. When your child is finished eating, let him or her leave the table. 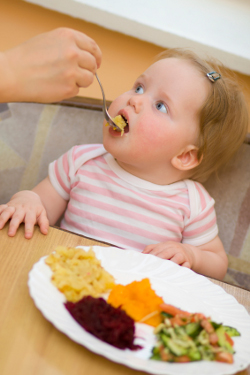 While we find it a challenge and also shouldn’t force our children to eat when they refuse to, we can make sure that the food on the plate is nutritious and nourishing. We can also attempt to make the food on the plate attractive for them to explore! Some mothers I know who faced such a challenge would begin to try to make tastier food options for their children such as mushroom or chicken baked rice or pasta. Bear in mind that our children won’t starve and they will learn to be more flexible rather than go hungry. Present a variety of healthy foods including their established favourites and some new foods to make up the menu. Your toddler may surprise you one day by eating all of them.

Also, remember to keep the portion small and offer only if he or she wants more. A mountain of food on their plate can be overwhelming for them to finish and they might just reject them all upon seeing the mountain.

5. Be a positive role model

Be a good role model and demonstrate that you are also taking the food he is eating. Some toddlers may find that the food is tastier and more interesting when the adults are eating the same food as them! When our children see that we are enjoying the food we are eating, it may cause them to be curious enough to explore them too!

Persistence is key in this phase. If your toddler does not like broccoli the first time around, do not stop serving them. In fact, children are naturally slower in accepting to new tastes and textures. So, keep reintroducing the broccoli by serving a small portion daily and encourage your child to try a bite without nagging or forcing. You may be surprised that your persistence may once day pull through and he or she may suddenly start eating them all!

When Samuel was refusing his food, I remembered preparing his usual favourites and also new foods on a daily basis. I wanted to ensure that he had a certain variety to interest him and also to ensure that there is food for him to take should he suddenly decide to feed that day.

This ‘rejection of food’ phase can be long and testing for many parents. Know that you are NOT alone in this journey and that THIS too shall pass. Hang in there! It isn’t worth getting flustered or stressed over a rejected bowl of pasta, or affecting your relationship with your child over a bowl of unfinished broccoli.