6 Tried And Tested Ways To Wean Your Child Off Pacifiers

Weaning is a long goodbye to any sort of attachment like the breast, bottle, or in this case, the pacifier. It can be an emotional and sometimes painful experience for both the parent and child. Weaning usually requires a lot of patience and time. And the experience differs depending on the age of your child as well as how easily he or she adapts to the change. 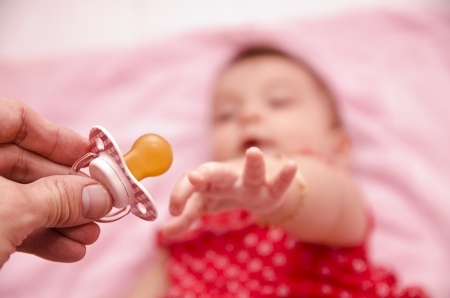 I started Sam, my firstborn, on pacifiers on the first night he came home from the hospital. And only weaned him off the pacifiers when he was 17 months old. He was rather manageable for us, sleeping through at about 4 months old. But at about 15 months old, Sam started waking up umpteen times in the middle of the night crying because the pacifier had dropped out of his mouth and he could not find it. After several months of disturbed sleep (waking up 3-4 times in the middle of the night) and shifting furniture to search for his pacifiers at wee hours in the morning, I knew I had to start weaning him before he gets too reliant on it. At the same time, it was for aesthetic reasons. The truth is, I don’t want to see Sam sucking on pacifiers all day long or trying to talk with his pacifier in him even at the age of 5 – 6 years old.

In the journey of parenthood, the decision to introduce a pacifier, and later, when and how to wean them off can cause parents more angst than anything else. There are many opinions on the subject matter and each has its own justified reasoning and values.

However, if you have already decided to wean your child off pacifiers, below are some tried-and-tested suggestions.

The truth is, the earlier we wean them the easier the weaning process. This is because our children can be more adaptable when they are younger. There would be a lot less protesting and expression of their displeasure should we wean them off a beloved habit like the pacifier when they are younger. As such, weaning them off before they turn one can make the transition simpler and with lesser frustrations and pains.

If you are uncomfortable with doing anything drastic, this suggestion may suit you better. It is also a good reminder that our child has formed an attachment with this pacifier over a long period of time and giving it up suddenly may not be easy for them. You can begin by restricting the pacifier to certain times such as only bedtimes or restricting it to certain places such as only the crib or his toddler bed.

You can also find the time of the day that your child is least likely to use his pacifier and start weaning him off the pacifiers during this period of the day. You can remove the pacifier from his sight during this period of time. If he asks for it, you can reassure him that he can have it later, and it is all right to do without it. And quickly move him on to another activity to distract him.

Distraction works most of the time. You can help your child by distracting him with his favourite snack or toy when he asks for his pacifier. This would keep him from thinking and using the pacifier before he throws a massive tantrum over the loss of his pacifier.

Involving your child and getting him used to the idea of sleeping without the pacifier before removing them may help your child ease better. At the same time, helping them find other self-soothing methods, like a security teddy bear or sleeping with a security blanket.

Many modern mothers I know use this method to help their children transition to life without the pacifier. They would enlist help from the imaginary character – “the Binky Fairy” to take their child’s pacifiers and “bless” them to others babies who need them. Or using the same “tooth fairy” strategy to exchange their pacifiers for a gift overnight.

First, they would get their child’s understanding and agreement to be involved with the “binky fairy”. Then they would get their child to put the pacifiers into a small bag independently to “send” it to the “binky fairy”. The next time the child asks for his pacifier, his parent will remind the child that he has donated it to the other babies through the binky fairy. Some parents find this method effective in weaning off the pacifier. They would dip their pacifier into bitter gourds paste or garlic to ensure that the pacifier would taste different, in hoping that the child will reject the pacifier on his own.

This is one method that worked well for Sam when I had to wean him off pacifiers at 17 months old. I had found this method suggested online the night before I started the weaning. The idea in this method is to alter the pacifier in some way that makes it unsatisfying for the child to suck on – such as poking a hole in the tip or cutting the tip off with clean scissors and ensuring that it’s a clean cut. When Sam consistently asked for his pacifier, even after I had taken the pacifier out of his sight, I offered him the one that has been altered. And of course, he wailed knowing that it was different. I had to consistently explain that the pacifier is spoilt and he will just have to do with this broken one if he wants it.

Safety note: Cutting off the tip of the pacifier or poking could be dangerous as the small pieces may come off and may become a choking hazard. Be sure to supervise your child and check it regularly for signs of wear.

If you have tried all methods yet failed, and just saying no may be the easiest method for you to achieve sanity, this may be an approach you may wish to try. To take the pacifier away and explain to him each time he asks for it.

While there is no right and wrong in introducing and weaning the pacifiers, it is all right if you have decided to let your child wean on his own choice and time. Some parents are determined to break the habit while some don’t, and think it’s best to let children wean themselves.

Watch this cute video of 17 month-old baby Cora, saying goodbye to her pacifier.

If you have read to the end of this list and have tried everything yet nothing has worked, perhaps the time isn’t right. Your child may be going through other transitions in his life or adjusting to new growth development and finds it challenging to do without his beloved security pacifier. Don’t fret! Try again in another few weeks or months later.

What are some other ways of weaning your child off the pacifier that has worked for you? Share them in our comment box below.