My Daughter Has Down Syndrome: Alyssa’s Story

Do you remember the exact moment when your baby was born?

For mum of three, Ilyana, the birth of her youngest child is forever etched in her mind. In that moment right after Alyssa was born, the delivery room fell silent. All Ilyana could hear was her baby’s cries as she entered this world.

Still, she did not think anything was amiss, until Alyssa was put into her arms. First, she saw her puffy face. And then, her eyes – almond-shaped eyes that curved upwards, tell-tale signs that all was not well.

The doctors soon confirmed what Ilyana already knew in her heart: Alyssa had Trisomy 21, also commonly known as Down Syndrome.

When Your Baby Has Down Syndrome 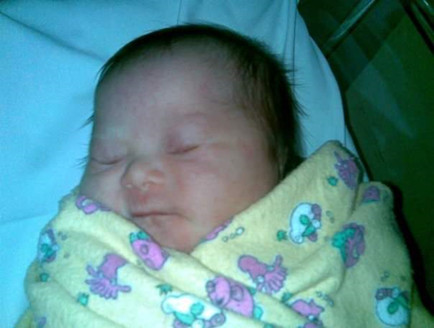 During all nine months that Ilyana was expecting Alyssa, her gynaecologist had not detected anything untoward to suggest the presence of that extra chromosome. The thickness of her neck was within the normal range, and she had a nasal bone. As such, there had been no alarms raised, no way of preparing themselves for this unexpected situation.

The next two weeks were a roller coaster of events and emotions for Ilyana and her family. At just two days old, little Alyssa was taken to the KKH NICU due to her high white blood count. The doctors suspected leukemia. Thankfully, several tests later – including a bone marrow one – Alyssa was cleared of this disease.

Ilyana was constantly worrying about her baby girl while recuperating, and the tears never seemed to stop falling. When she finally had the chance to see her again, Alyssa’s hands and feet had sustained bruises from all the poking from the needles, and she was crying. To Ilyana, it was a cry for help, but she had no idea what to do. All she could do was pray, together with her family.

Thankfully, Ilyana’s fervent prayers were answered, as doctors later concluded that the high white blood count was the result of Alyssa’s body fighting an infection.

After the leukaemia scare, a million and one worries started to crawl their way into Ilyana’s mind. Turning the pages of Alyssa’s baby health booklet and looking at the checklist, she was afraid to think of how her daughter might not reach the different milestones with the rest of her peers. She cried thinking of how her child would probably develop at a much slower rate than the other babies.

Will she be able to talk? When will she start walking? Will the hole in her heart stop her from being an active child?

How is she going to go to school? How can I help her lead a ‘normal’ life? Where do I start?

These were probably just a fraction of the questions that ran through Ilyana’s mind on a daily basis.

A New Way of Life

The early months and years after Alyssa came home were full of medical appointments with the cardiologist, eye doctor, ENT department, hematologist and neurologist, and not forgeting time spent with the occupational, physical and speech therapists too.

Shuttling up and down with Alyssa, while holding down her job as an education officer, as well as caring for her two other young children, was as exhausting and overwhelming as it sounds. Initially, Ilyana pressed on despite the tiredness, because she knew the extra cash would be helpful in paying for all the medical expenses and therapy.

But after several months, she finally accepted that it was just too much for her to handle. She decided to leave the service and become a stay-at-home-mum to take care of Alyssa and her siblings.

“Moving to live on a single income, we could feel the pinch. But I did not, and still do not regret my decision to be a full-time housewife and mother,” she shares.

There were many emotional struggles to endure as well. 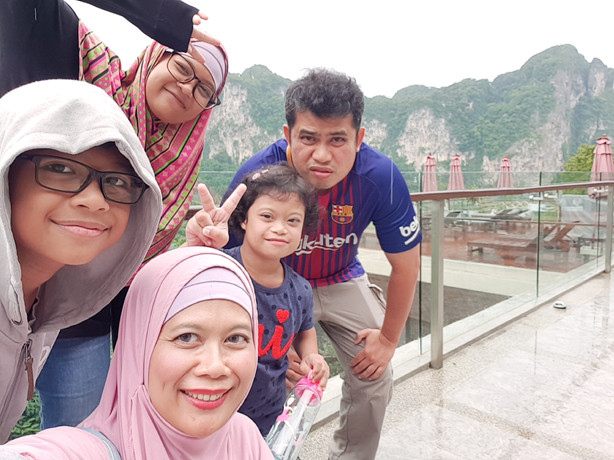 The family in Krabi, for a holiday trip

“Having more time to spend with Alyssa also gave us more time to be outside and interact with the public. But as I sent her to her therapies and follow-ups, I would notice every single stare that was directed at Alyssa.”

“I got so worked up every time I saw someone staring at Alyssa, because that’s not how they look at other babies. Many times, I felt like giving them a piece of my mind – but I held back! I remember crying my eyes out when I got home after such an encounter.”

Ilyana kept herself busy by teaching her children at home, especially Alyssa. With the knowledge that she had gained from her NIE days, together with hours of research to understand the different treatments she needed, Ilyana became Alyssa’s home therapist and teacher.

She set up a dedicated corner in the home for Alyssa’s learning, and filled it with educational toys and other resources to aid her development.

Will She Be Bullied?

During the initial months, Ilyana had feared how society would view Alyssa, worried that she would not have any friends because she looked different. She was afraid that her daughter might be bullied and taken advantage of by other children.

Mainstream or SPED school? That was a question at the back of Ilyana’s mind even before Alyssa turned one.

Another major factor to consider was the curriculum. It is common knowledge that Singapore’s primary school curriculum is not for the faint-hearted. We are way ahead than other countries. At seven years old, you are already expected to be able to read, even before entering Primary One!

“Having experience as an education officer is a double-edge sword for me. I knew what we were in for when I registered her in a mainstream school. I understood the curriculum and expectations that would be set. On the other hand, knowing all this also placed an added stress on me to make things work.”

Finding a School For Alyssa

When Alyssa was about three years old, Ilyana began the search for a nearby kindergarten, but encountered several rehections along the way. Some centres turned her down, citing the lack of a trained teacher in special needs. It was a discouraging and frustrating process for Ilyana and her husband.

On one visit to the PCF centre where her older boy Aniq was learning, Ilyana and Alyssa happened to meet the principal, who took an interest in her story. After some discussion, Alyssa was given a place in the centre. Finally, there was light at the end of the tunnel!

When Ilyana and her husband saw the potential in their little girl who was coping well beyond their expectations in kindergarten, they set their minds on putting her into a mainstream primary school, and started laying the groundwork.

Ilyana focused on building the literary foundation that would be necessary for her daughter, putting what she had learnt in NIE and her years in the classroom to good use.

“I guess this was the reason why I became an education officer. For me to now use that knowledge to teach Alyssa. This is my true calling,” Ilyana smiles.

And so, Alyssa went through kindergarten, graduated, and now she is in Primary 3!

Blessed with Great Friends And Teachers

Throughout her kindergarten and primary school days, Alyssa has been blessed with good and kind people around her.

Friends look out for her and are always ready to lend a helping hand. Teachers have done an awesome job in educating Alyssa’s classmates, and even Ilyana has received much-needed moral support from the mothers of her friends. 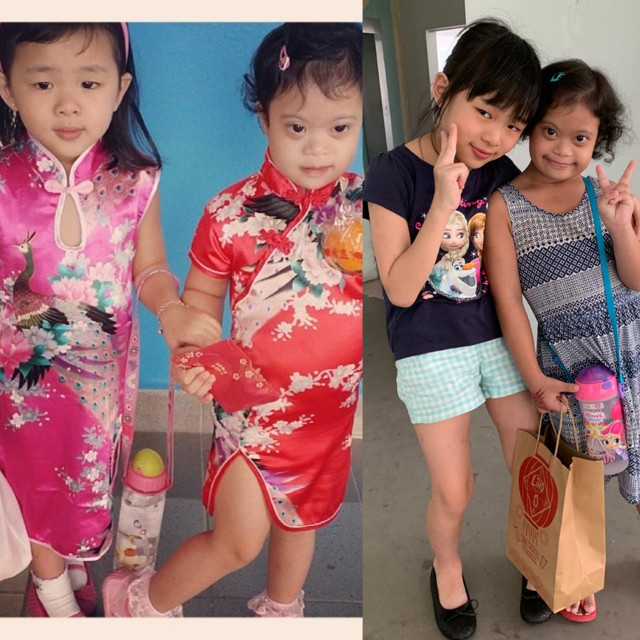 “Academically, we manage our expectations. When Alyssa started primary school, how well she adapted and her social skills were our main priority. But we still do try to get her to keep up the pace with her peers,”

“Now that she is in Primary 3, this is where the going gets tougher! We try our best to help her understand what is being taught in school, by reinforcing concepts, getting consistent practice done and breaking down steps for her,”

“She excel in certain components, like spelling and language in general, but when it comes to numeracy skills, she is trying her best and we let her pick it up at her own time and pace,” Ilyana says.

To fellow parents who are facing a similar situation as her, the mother shares, “It is a long and winding road for parents of children with special needs. As a parent of one, I personally do not see anything ‘special’ about what they need. It is just that extra effort that everyone puts in for the benefit of the child.

“Regardless of the path you decide to undertake, my advice is to my fellow parents is to trust your instincts, listen to suggestions and advice from people around you and make an informed decision,”

“Do not give up and always take any rejection that comes your way as a redirection, instead, to something better. Remember also that we are our children’s first teachers. Do what you can for your kids to get a head start. Do not solely depend on the teachers. Work together.”

At almost nine years old now, Alyssa is a cheerful, vivacious and bubbly girl with a sparkle in her eye. She enjoys school, and does well in her spelling. She loves dancing and singing along to K-pop songs (Twice is her her favourite group) and enjoys ball games, especially playing soccer with her big brother, Aniq.

“She is our little angel, who has taught us what determination, perseverance and a never-give-up attitude can do.” 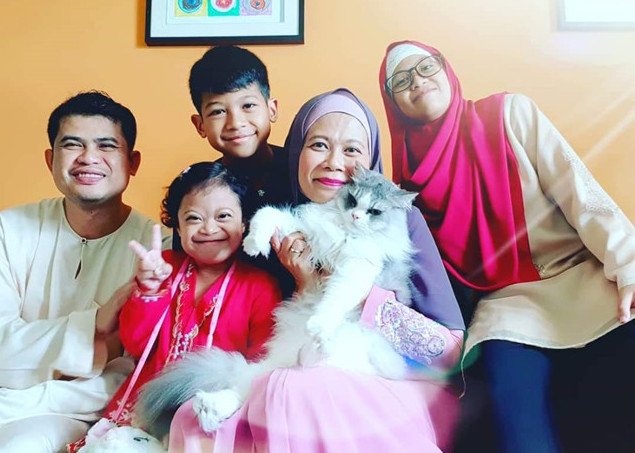 Ilyana (centre) with her family. Alyssa is next to her, dressed in pink.

Ilyana is thankful for the love, encouragement and support from friends and family members throughout these nine years. Cousins, aunts and uncles have rallied around them, to encourage and pray for their journey since Day 1.

Other mothers of children with Down Syndrome have also had a huge impact on Ilyana’s life.

For example, she remembers meeting Anna, another girl with Down Syndrome who is a few years older than Alyssa. When she met Anna some years back, she was studying in a mainstream primary school, and Ilyana had the opportunity to have a chat with her mum.

Anna’s mother encouraged Ilyana not to give up, and cheered her on to believe that her daughter would one day be able to do this too. From then on, Ilyana was determined to give Alyssa those same opportunities.

Looking back now, she can confidently say that it was all worth it.

By Dorothea Chow. All photos courtesy of Ilyana.