A Drive Of Surprises: Our Kia Sorento Experience

We were one of the three blessed family to experience the all new Kia Sorento 7-seater SUV. Awed by the sleek and sporty outlook of the Sorento, my husband, Darius (my three year old son) and I were further impressed by the ultra-spacious and sporty leather seats on the interior. 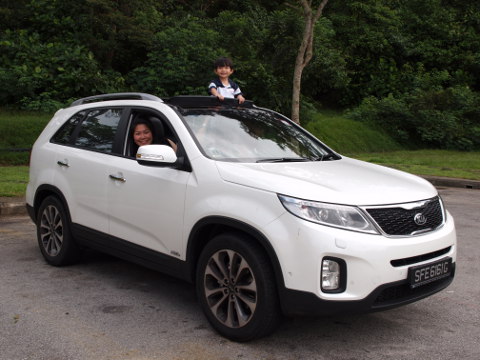 Too Cool for Comfort

The ventilated front seats coupled with air conditioning vents right up to the last row seats of the car were extremely practical especially in our unpredictable tropical weather. For one of the outings, I brought along my aunt, my cousin and her 6 year old daughter (with Darius and myself) to visit Kids Kampong at Pasir Ris Farmway. It was scorching that day, and although we were sweltering from the heat during our farm visit, we were quickly cooled by the superior ventilation system of the car. 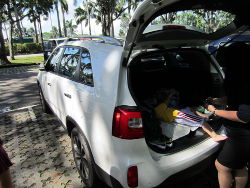 We also went plane watching together, which was a very fun and enjoyable experience for the two kids. I even discovered a new ‘function’ of the car. When we were out and could not find any diaper-changing facilities, the flexible seat arrangement allowed me to use the back row seats as a diaper-changing area! All I had to do was to push the two back row seats flat down, lay my son’s diaper mat over, and there – my own personal diaper-changing area. A plus point for families with toddlers or infants. 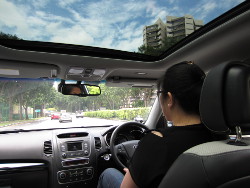 The huge dual-pane sunroof allowed Darius to enjoy a panoramic view of the clouds and stars, and feel the occasional outdoor breeze on his cheeks. He was so hooked on the sunroof that even after we have returned to using our old car, he continues to ask for the roof to be ‘opened’.

During one of the nights, my husband drove us to Jurong Hill for star gazing. Through the sunroof, we were able to observe the stars in the clear night sky, without having to get out of the car. It was a pity that our camera could not get a good picture of the beautiful stars that night.

Fuel Efficiency at its best

Many of our passengers and friends were astounded by the fuel efficiency of the car’s 2.2L CRDi diesel engine. Even we were shocked when we discovered that we clocked an impressive 650 kilometres without having to top up, with some fuel left. Highly economical as compared to petrol, it does not burn a hole in the pocket in the long run. Being an environmentally-conscious family, we were also won over by the eco-friendly features and the low carbon emission to prevent further damages to the environment.

Despite running on a diesel engine, the car is powerful in terms of its pick up speed and maintains a low rev. of about 1500 while cruising on the expressway. Unlike other commercial noisy diesel vehicles on the road, the only noise we heard from the car (minus any background music) was the quiet purring of the engine. 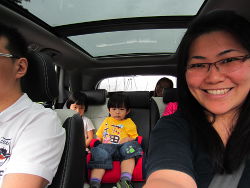 Three Generations all in One Ride

With the spacious sporty seven seater, my family and I had the opportunity to reminisce old times as we took a trip to Changi Village, where our parents used to bring us when we were little. Now that we have all grown up with our own expanded families, this activity became a thing of the past until recently. With the roomy second and third row seats, we were able to travel comfortably with three generations in tow (my parents, my two sisters, my husband and son) to enjoy our favourite pastime and family bonding activity together – eating good food.

The most impressive feature of the car I have to say would be the Smart Parking Assist System (SPAS). Some of the popular food hunts we went for supper only had parallel parking slots. To some parents, parallel parking in a big SUV vehicle can be quite a challenge.

But the Kia Sorento SPAS proved its brilliancy when it navigated through small tight spaces on its own. Once the car is in SPAS mode, I simply let go of my hands and let it do the parking while I watch out for my blind spots. All I had to control were the brakes and gear. No worries about hitting any moving or stationary objects because the ultrasonic sensors at the front and rear will alert the driver with a beeping sound if the car gets too close to any obstruction. Who knew parallel parking could be so easy!

Even my dad, a bus driver for more than three decades who is hardly impressed by anyone, was visibly amazed by the technology of the SPAS. My aunt was so astonished and exclaimed that if she was not up to date with today’s technology, she might have thought the car was “possessed”!

This is definitely THE feature most drivers would appreciate.

A big car with big surprises, for big families. While cruising to the different places, our travelling time also became a great family bonding time. We could not have asked for a better ride.

Thank you Cycle & Carriage Kia for the opportunity to test drive the new Kia Sorento! Definitely the best SUV to buy!

For more information on the new Kia Sorento, go to www.kia.com