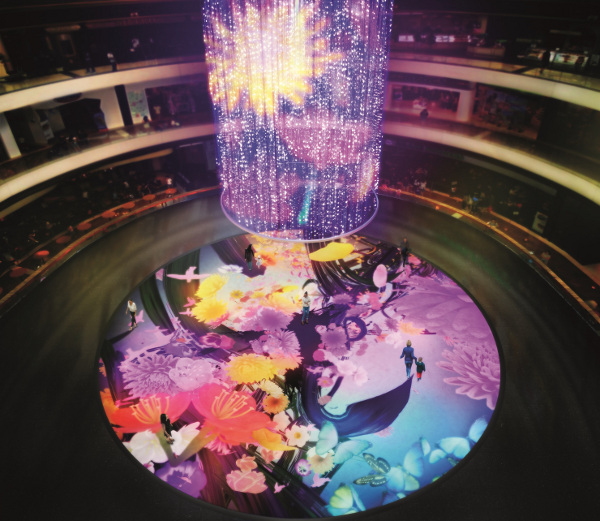 Marina Bay Sands is gearing up to unveil a permanent attraction that will take immersive experiences to new heights through a multi-sensory combination of technology and digital art.

To be unveiled on 22 December in time for the festive holidays, the Digital Light Canvas will immerse visitors in an imaginative world of digital art, and allow them to interact with its elements through an unprecedented union of two highly dynamic technologies.

Located at the North Promenade of The Shoppes at Marina Bay Sands¹, this permanent attraction is commissioned to multi-award winning Japanese art collective teamLab, who also created the landmark Future World: Where Art Meets Science exhibition at ArtScience Museum.

¹Digital Light Canvas is located on Canal Level, B2, The Shoppes at Marina Bay Sands (adjacent to Rasapura Masters)


The new attraction, which took about two years from conception to completion, will feature teamLab’s proprietary 4D vision display technology in the form of a magnificent 14-metre tall light sculpture suspended from the ceiling. More than 401,000 full-coloured LEDs are strung within 608 tubes hanging within the cylindrical sculpture. This interactive technology allows users to project pre-programmed 3D objects onto the installation via their smartphones.

Beneath the light sculpture is a dynamic LED floor spanning 15 metres in diameter and consisting of over 7.7 million individually controlled LEDs. Graphics on the floor are rendered in real time in reaction to people’s behavior and movement. When both technologies are combined, the Digital Light Canvas – which occupies the former skating rink space and measures 20 metres tall in its entirety – will provide visitors the opportunity to create their own digital art interpretations.

Mr. John Postle, Vice President of Retail, Marina Bay Sands, said, “The Digital Light Canvas is an invitation to our visitors at The Shoppes to have fun, to play, and to explore magical wonders of the digital universe. We want to create an experience that keeps on evolving – one that not only aspires to evoke people’s imagination, but also to draw them to visit again and again. The new attraction will also reflect seasons throughout the year as we progress with time. We are positive that experiences like these will continue to set us apart from other shopping destinations in the world.” 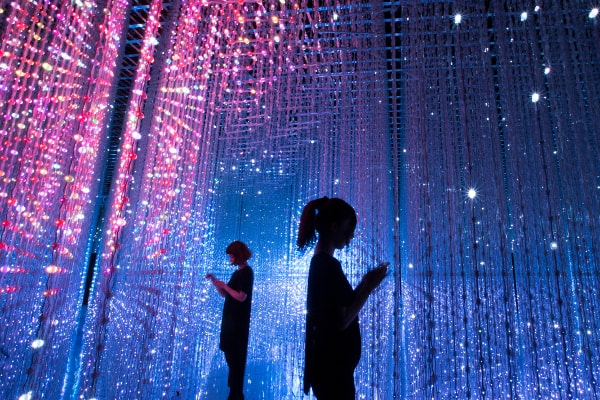 Mr. Toshiyuki Inoko, Founder of teamLab, said, “We are excited for another opportunity to work with Marina Bay Sands to build this magnificent project. teamLab aims to explore a new relationship between humans and the world through art. The artwork changes due to the presence of humans, and this in turn, transforms the relationship between people in the same space. Digital Light Canvas hopes to create an experience that transcends and ambiguates the boundaries between people and the artwork, and amongst people themselves.”

The Digital Light Canvas features four different show modes² accompanied by unique soundtracks throughout the day. Each scene is ever-changing and never the same.

In addition to physically interacting with the LED floor to generate special effects, visitors located within the vicinity will also be able to set off a series of digital reactions and customised messages on the installation, through their mobile devices via an exclusive on-site Wi-Fi.

Digital Light Canvas Operation Details:
Day & Time: Daily 12pm to 8pm from Sundays to Thursdays, and until 9pm on Fridays, Saturdays, and eve of public holidays.
Admission Fee: S$5/pax complimentary for those two years and below. A unique serial code to cast an anniversary greeting, birthday wish, or wedding proposal on the LED floor is priced at S$50.

Future World exhibition ticketholders will also enjoy access to the attraction, while those who purchase a special bundle to visit three unique attractions across the integrated resort – namely the Digital Light Canvas, Sampan, and Sands SkyPark – will enjoy 15 percent off the original ticket prices (S$32.30 per adult, S$27.20 per child).