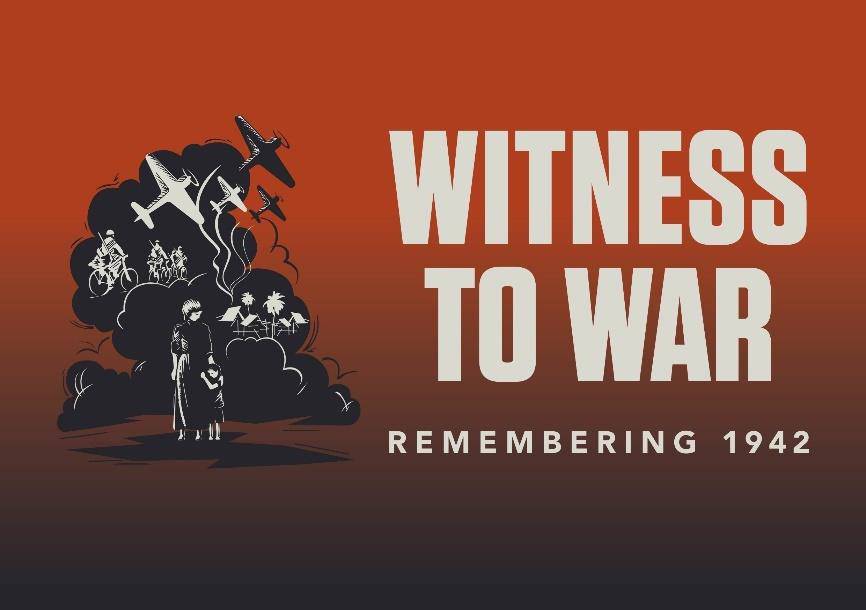 The National Museum of Singapore remembers 1942, a time etched in the memories of generations past, through its latest international blockbuster exhibition that features more than 130 artefacts from 10 overseas museums and institutions.

Witness to War: Remembering 1942 explores how Singapore’s fall was part of a wider campaign waged by the Japanese Empire across the Pacific, and invites visitors to uncover the rich and complex world of untold stories centered on the fall of Singapore. The narrative also complements the current World War Two narrative that is presented in the National Museum’s permanent galleries, which largely focuses on the battle for Singapore and the Japanese Occupation.

Director of the National Museum of Singapore, Angelita Teo, said, “With Witness to War: Remembering 1942, we have adopted a fresh approach – to look at the events that led to this watershed event, explore the shared memories of World War Two in the region, and hear from ordinary people who lived through those extraordinary times. This is the first time that the National Museum has collected war stories on such a large scale. The in-depth focus on and presentation of these rich experiences is also a first for us. The 75th anniversary of the fall presented the perfect backdrop for it, as we felt an urgency to record these war memories before they become lost and forgotten. This is an exhibition not just for Singaporeans, but also for the world. We invite everyone to remember 1942 with us, as we examine our past and try to build a better legacy for our future.”


Here are 10 reasons to experience Witness to War: Remembering 1942:

1. Gain a fresh perspective on the fall of Singapore through untold stories from Singapore and beyond

For the first time, the National Museum is leading an international blockbuster that moves beyond the traditional portrayals of World War Two. Centred on the fall of Singapore on 15 February 1942 and its immediate aftermath, Witness to War: Remembering 1942 explores events in the 1930s leading up to the fall, setting the British surrender against the larger backdrop of upheaval in the Pacific region. Stories of the war are told through its witnesses: artefacts and accounts from war survivors and veterans. 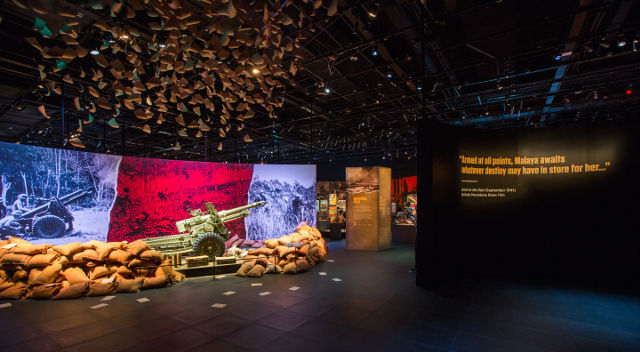 One of the star artefacts that will be showcased in the exhibition is the 25-Pounder Field Gun, which will be making its debut as a recent addition to the National Collection. Used by British and Commonwealth armies in World War Two, the 25-Pounder Field Gun will join other artefacts from the National Collection that will be exhibited for the first time, such as a Japanese Army bugle, an Enfield No. 2 Mk. 1 revolver, and personal artefacts of the war survivors. The portrait of Sir Shenton Whitelegge Thomas painted by artist Xu Beihong, which was previously displayed in the Singapore History Gallery, makes its return in Witness to War after a period of conservation.

3. Get up-close with world-class artefacts from 10 overseas museums and institutions

Through partnerships with museums and institutions across the Pacific and beyond, the exhibition features an array of artefacts that have never been showcased on Singaporean soil. This includes the sword of General Tomoyuki Yamashita, which will be on public display outside the United States for the first time since the war ended in 1945. A poster featuring Bruce Lee’s grandfather, Ho Kom-Tong, engaging in fundraising activities in Hong Kong, is also featured. These artefacts tell of a shared regional history, and visitors can learn more about the international and regional significance of the fall of Singapore through them. Artefacts from the following partner museums and institutions will also be on display:

4. Private loans from old and new friends of the museum

The exhibition’s focus on personal stories also shines through a diverse selection of artefacts that were loaned to the museum from private lenders. This includes the personal diary of Major-General Lim Bo Seng, which will be showcased to the public for the very first time, offering a glimpse of Major-General Lim as a husband and father: a lesser-known side to Singapore’s well-loved war hero. Other notable artefacts include a prisoner-of-war identification certificate from the Philippines. This item, on loan from Filipino collector and history scholar, Dr Ricardo Jose, marks the first time that World War Two-related items from the Philippines are being displayed at the National Museum.

Witness to War: Remembering 1942 moves beyond traditional methods of artefact-centred curatorial presentations. See how key international events from 1914 to the late 1930s were translated into popular culture or hear war survivors tell you their stories in their own voices. Their experiences are also depicted through illustrations by up-and-coming young Singaporean artists. The exhibition also features a film montage that offers a glimpse into the first few decades of the 20th century (1910s-1930s). Made up of selected films, it illustrates how cinema reflects and translates the dramatic impact of international developments on society. The exhibition also engages your sense of smell, having worked with international perfumery Givaudan, the global leader in the creation of flavours and fragrances, to re-create the smell of gunpowder to accompany near the display of the 25-Pounder Field Gun.


6. Be moved by stories of destruction, displacement, love & loss, and fortitude

Providing the perspective of everyday voices and the man and woman on the street, the exhibition features four story pods that take visitors through intimate stories of witnesses to war. These stories were unearthed through months of investigation and interviews by exhibition curators Priscilla Chua and Sarah Yip. From the anxiety and uncertainty of being displaced from one’s only home – as told by ‘Ubin Pakcik’ Ahmad bin Kassim – to the joy and relief of reunion with a loved one in New Zealander Kathleen Pether’s story, visitors can uncover this rich and complex world of wartime experiences.

7. Meet the next generation of storytellers through the Student Archivist Project

As part of the National Museum’s efforts to encourage inter-generational dialogue and bonding, this is also the first time the National Museum has involved students in the exhibition-making process, enlisting their help with the recording, preserving, and sharing of war survivors’ experiences. Understand the war through the eyes of the younger generation as they interview their grandparents, school alumni, and even pioneers from nearby Senior Centres in the neighbourhood about their experiences living through the fall of Singapore and beyond.

8. Engage your children in important conversations 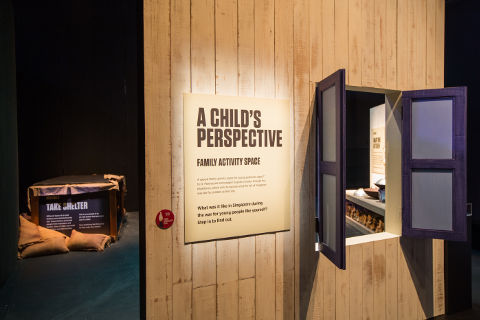 A special family activity space, entitled “A Child’s Perspective”, has been set up within the exhibition gallery to provide a place for families to guide their young ones – through the complex topic of war, and engage them in conversation about important decisions, such as whether to stay or leave one’s home. This activity space offers young visitors a glimpse of what war in Singapore was like for young people such as themselves, and includes a variety of interactive activities. Special activity booklets have also been developed to guide young minds through the exhibition and other war-related displays of the Museum.

This year, the Australian War Memorial and the National Museum of Singapore collaborated on the first Australia-Singapore Joint Artist Residency exchange programme, where Australian artist Angela Tiatia and Singaporean artist Debbie Ding participated in one-month residencies at each institution. Inspired by personal accounts of war survivors in Singapore and representations of war landscapes from the collections of both institutions, The Fall by Angela Tiatia and War Fronts by Debbie Ding are intimate, evocative responses to Singapore and Australia’s shared World War Two history. Both feature the use of multimedia and innovative techniques to reflect upon the shared landscapes of memory that define, and yet blur, how we remember War World Two in the Pacific.

10. Leave your mark, and take home a part of the exhibition

After charting your own path through the exhibition, take a moment for reflection and contemplation y penning a letter to the war survivors and veterans featured in the exhibition which the museum will then deliver on your behalf. For visitors who are witnesses to war themselves, they are most welcome to share their stories with museum staff present in the galleries.

An exhibition compendium and catalogue of the stories of ordinary men and women who braved the fall of Singapore in extraordinary ways, and artefact highlights, is available for S$16. Foodies can also pick up a revamped edition of popular book Wartime Kitchen: Food and Eating in Singapore 1942-1950, which has been repackaged with Peacetime Kitchen: War Recipes Restored, a set of twelve wartime recipes adapted for modern kitchens, for $28 at the MUSEUM LABEL stores.

The Witness to War: Remembering 1942 experience extends beyond the exhibition. Visitors are invited to participate in specially programmed film screenings, guided tours, talks, special behind-the-scenes events, craft workshops, and even a special wartime menu at the Food for Thought cafe on level 1 of the museum – to enhance their experience and broaden their perspective of 1942.

Witness to War: Remembering 1942 is open to public from 23 September 2017 to 25 March 2018, and is chronicled on social media via the hashtag #remembering1942. Admission is free for Citizens, Permanent Residents and visitors aged 6 years and below. For more details, please visit here.

Image Courtesy of the National Museum of Singapore, National Heritage

Make full use of the weekend and take your kids out to Singapore’s Largest Indoor Family Carnival !. Click image to find out more. (Enter promo code “TNAP35” to enjoy 35% off tickets here) 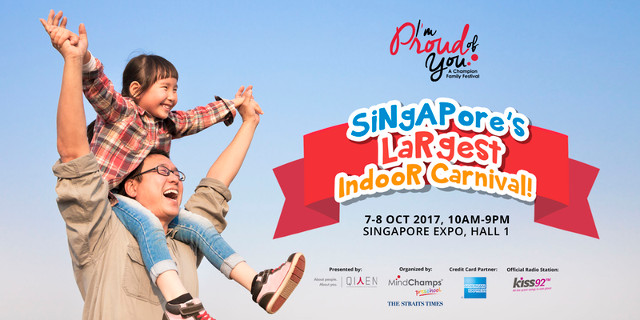