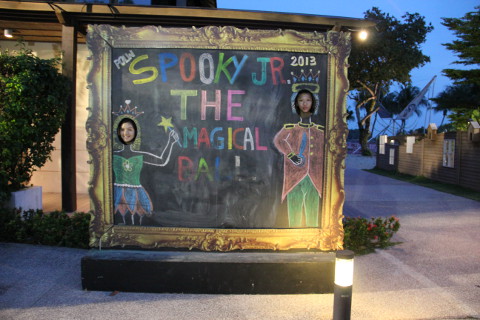 Recently, my family and I attended an unforgettable Magical Ball at Port of Lost Wonder! Upon arriving at the entrance, I was impressed that there were many families all decked out in innovative and attention-grabbing costumes. The frilly princess dress donned by one of the Royal Crew left an impression on us, as it made the atmosphere of the Magical Ball dreamlike!

We presented the Royal Crews with our Royal Invitation, and were whisked off to the lounge of the party. 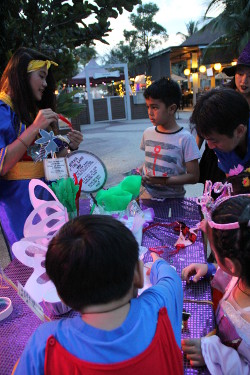 Mask Decoration
We were warmly welcomed by two Royal Crews in themed costumes to decorate the little one’s mask. With feathers, sequins, stickers, and flowers, they were spoilt for choices when it comes to designing their very own mask! 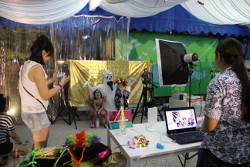 Royal Portrait
After the mask is nicely decorated, the Royal Photographer was all ready to take a Royal Portrait for us. She made sure that our costumes were prim and proper, before she snapped away. I noticed another family, with the children dressed in red and blue stunning wigs, oh what a great way to look good on the Royal Portrait. While anticipating the Royal Portrait, we headed out to take more pictures at the Pumpkin Carriage! 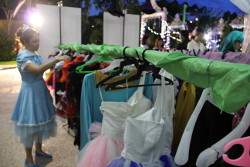 Royal Boutique
For those who need a little transformation, the team of Royal Designers, Stylists and Make-Up Artists were at their calling at the Royal Boutique! Out of curiosity, we stepped in and saw a little girl being transformed into a princess, fit for the Magical Ball. She had a pink feather on her long tresses, giving her hair-do a classy finish! Her face had exquisite make-up designs, a bold fashion statement! 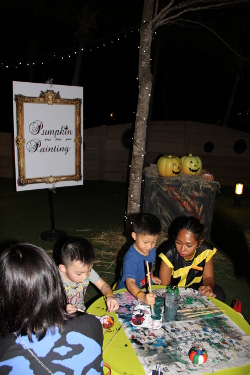 Pumpkin Painting
We decided to put our artistic skills together into painting the pumpkin. With a variety of colours to choose from, our pumpkin was naturally colourful and bright. I observed the other children who were so engrossed in painting the pumpkin; they had paint on their faces, hands and gowns, uh-oh! 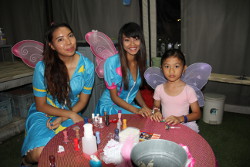 Garden Fairies
Over at the Fairy Garden, a pampering treat for the children – Manicures! The Garden Fairies worked their magic on their little nails, complimenting their outfit and mask. The children were thrilled to pick their favourite colours and proudly showing off their freshly painted nails. If manicures are not your cup of tea, how does a temporary glitter tattoo sound? We took a sneak peek, and some of the little girls had got trendy manicured nails! 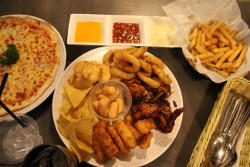 Port Belly
At the Royal Dining Room – Port Belly, we indulged in a Family Platter, the ultimate meal with calamari rings, grilled winglets, cocktail sausages, breaded fish bites, chicken nuggets, nachos, French fries and a margherita pizza! Not forgetting the Junior Royal Feast and the King’s Feast that are specially created for the Spooky Jr. Magical Ball, which we did not get the opportunity to relish! 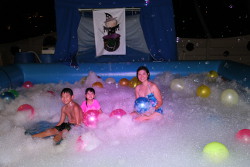 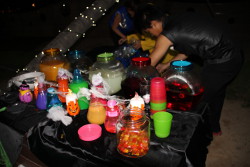 Sweet Potion Brewing
After the bubble play, we went on to get a concoction by the Royal Witches and Wizards at the Royal Sand Pit. The children were fascinated by the frog eggs, wriggly worms, quirky coloured liquids, on a table with cob webs! All the children waited eagerly for their turn to mix their perfect Royal Mocktail, and savouring it the Royal way! The little ones from my family had so much fun mixing their own Royal Mocktail. When it was done, I took a sip, for the fun of it! 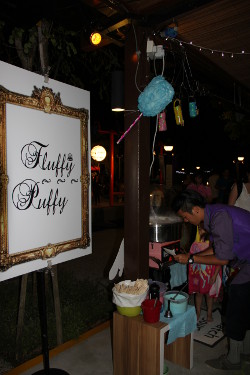 Fluffy Puffy & Twirly Whirly
To spice up the sweetness at the Magical Ball, the children got their hands on the Royal Fluff (Cotton Candy) and Twirly Whirly (Balloon Sculpture)! The Royal Fluff is a favourite, especially with the younger Princes and Princesses! Did you know that the Royal Fluff is best consumed immediately? Else, it flattens and melts when exposed to air for too long! Not long after, I noted that many children went around with swords, puppies, the work of art by the Royal Twirly Whirly Crews! 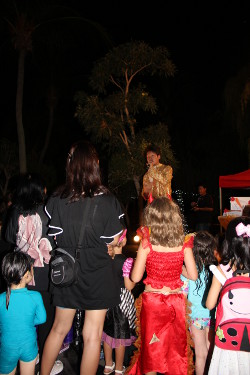 Interactive Story-telling
The Ultimate Story-telling session took place at the Royal Courtyard with the children and the Royal Storytellers! We witnessed the Royal Actors and Actresses making a grand entrance from different directions, engaging the children along the way. From the expressions on their faces, enthralled is the word to describe how the little ones felt. As the story goes, the children had to get on their feet to search for the missing shoe, it was a magnificent Finale! 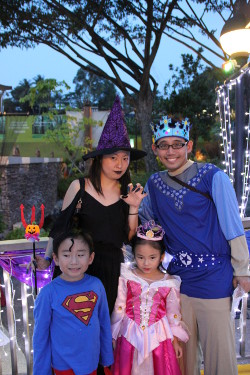 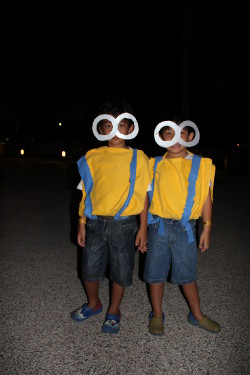 Best Dressed Competition
The highlight of the Magical Ball, the children (and parents) vied to get spotted by the Royal Fashionistas as the Best Dressed Royal Family and Best Dressed Royalty! They had to pit their skills against each other, to stand out, in a test of popularity and fashion! Did I mention that I went to great lengths to doll up for the Magical Ball, not forgetting my Royal Family that came dressed in matching costumes! Why of course, how can I miss a rare opportunity to display my fashion sense?

“I went to Daiso to get two towels, and from there I used safety pin and scissors to create the Minion costumes. I discussed with the children on theme, and I thought it is something they can go together in!”
– Mr Kelvin Ang, a Daddy blogger and father of three children, on how he derived the Minion costumes for his two sons

If you missed out this year’s Sentosa Spooky Jr., remember to keep a lookout for next year’s Halloween Party! For more pictures, visit their Facebook page!

Stay tuned for more child-friendly activities proudly brought to you by Port of Lost Wonder, Singapore’s First Kids’ Club by the beach!

By Heather Yew
Photos by Port of Lost Wonder, Sentosa