Just in time for National Day, a proudly-local display celebrates the rich history of orchids in Singapore

Gardens by the Bay’s Orchid Stories of Singapore showcases the stunning local hybrids that made the world take notice of Singapore, and how orchids are intertwined with the narrative of our nation From Vanda Miss Joaquim to Papilionanda (Vanda) Tan Chay Yan, from Aranda Noorah Alsagoff to Aranda Bertha Braga, these orchid hybrids that were the brainchild of local breeders were of such superb quality, that Singapore was catapulted to international prominence in the orchid world. In fact, Singapore was once one of the largest exporters of orchids, and by the late 1990s, the local orchid industry had grown to become a multi-million dollar one.

This aspect of our country’s rich orchid history is brought to life in the new Orchid Stories of Singapore (狮城兰花缘) display in Gardens by the Bay’s Cloud Forest. Opening today – just in time for National Day – the display hopes to share with both locals and the increasing number of returning tourists alike, Singapore’s long love affair with orchids.

The orchid display showcases more than 40 local hybrids and regional hybrids whose lineages come from Singapore hybrids. There are also detailed storyboards that document how orchids became intertwined with the Singapore’s history, culture and economy, beginning in the late 1800s.

Orchid Stories of Singapore was launched by Minister for National Development and Minister-in-charge of Social Services Integration Desmond Lee today.

Gardens by the Bay CEO Felix Loh said, “The Orchid Stories of Singapore display is a celebration of Singapore’s innovative spirit in our horticultural history. Through our pioneers’ creativity and resilience, a small nation like ours was able to stun the international community with beautiful orchid hybrids of a world-class standard. This is a part of Singapore’s heritage that we feel all Singaporeans should be proud of, and as a local icon, Gardens by the Bay would like to share this with the rest of the world.”

The roots of orchid hybridisation in Singapore

There are more than 200 species of orchids native to Singapore, and over 10,000 species in Southeast Asia. With such a rich diversity in our own backyard and beyond, Singapore has a natural environment conducive to orchid hybridisation. 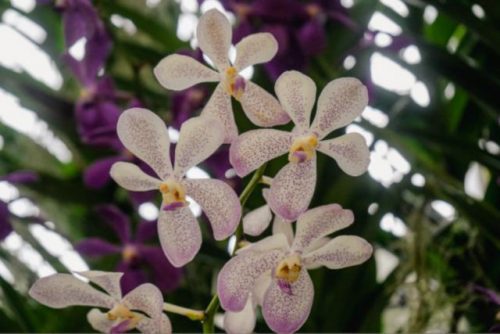 Orchid Stories of Singapore traces the evolution of the role of the orchid in Singapore, beginning from the early days when the first orchid collection was established in 1875 and became a hobby of the privileged in society – eventually leading to the creation of the iconic Vanda Miss Joaquim in 1893. The orchid display also explores the maturation of orchid hybridisation efforts in the 1950s as local breeders honed and refined their techniques, and the exceptional hybrids that were produced between the 1950s and 1980s – the peak of Singapore’s orchid hybridisation efforts.

Interspersed in the display are interesting anecdotes of local orchid history. For example, in 1954, John Laycock, founding member of the Malayan Orchid Society, sent 300 orchids he had grown in Mandai Orchid Gardens to Colombo, Sri Lanka, as a gift to Queen Elizabeth II. In the same year, Papilionanda (Vanda) Tan Chay Yan, a golden pink-apricot hybrid orchid hybridised by Robert Tan Hoon Siang, a descendent of philanthropist and businessman Tan Tock Seng, was awarded a prestigious First Class Certificate (FCC) from the Royal Horticultural Society at the Chelsea Flower Show, and made Singapore internationally famous. Then in 1981, the Vanda Miss Joaquim was named the national flower, triggering a revival in interest in Singapore’s orchid heritage.

In the present day and beyond

Singapore’s orchid industry is now focused on maintaining its position as a world-renowned orchid cultivation and hybridisation centre. Further improvements and breakthroughs, to create new colours and longer lasting and showy hybrids, are planned. New breeding lines leading to plants with better genetics that will result in better flower texture, bigger flowers and more intense colouration – qualities long sought by orchid breeders and growers, are also being developed.

In view of this, Gardens by the Bay started its own orchid hybridisation programme in 2015. Possessing both a cooled conservatory housing cool-growing highland orchids and a nursery housing warm-growing tropical lowland orchids, Gardens by the Bay is able to focus on novel lowland-highland orchid crosses, which bring together the best qualities of either parent from two distinct climatic regions, and enable horticulturists to develop hybrids that are able to grow and flower in a broad range of temperatures.

One such unique hybrid, Dendrobium Kiat Tan, will be on show at Orchid Stories of Singapore. Tropical hybrid orchids bred by the Gardens’ horticulturists, such as Dendrobium Moses Lee and Papilionanthe Wong Siew Hoong will also be on show.

You can get tickets online via Klook.