Cody The Robosapien Movie In Singapore 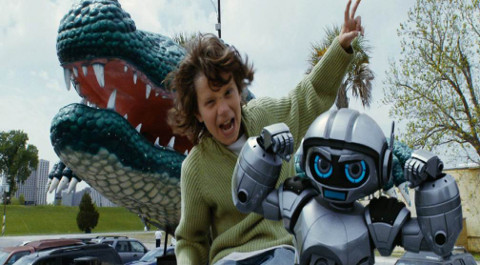 CODY THE ROBOSAPIEN- IN THEATRES 5 SEPTEMBER

Henry may not be the most popular kid in school, but he is certainly the smartest and that has its advantages when he comes across a broken robot which he names Cody. After fixing the robot, Henry discovers that Cody isn’t your average automaton – he’s a highly intelligent search and rescue robot who has been set free by his inventor from the clutches of the evil Kinetech Labs who plan to use him for military purposes.

Cody and Henry’s friendship looks as though it may be brought to an abrupt end when Kinetech track down Cody and take him back to the lab, however Cody’s inventor feels guilty and reunites the two friends. When Kinetech kidnap Henry’s mother and the inventor in retaliation, it’s up to one boy and his robot to outwit their captors and save the day.

Inspired by the hugely popular Robosapien toys, Robosapien blends fast-paced action, mischievous humour and incredible CGI to create a rollercoaster ride of an adventure that all the whole family will love.